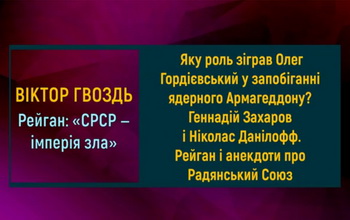 Victor Hvozd, the President of the Independent Analytical Center for Geopolitical Studies “Borysfen Intel”, Chief of the Military Intelligence (2008–2010) and Foreign Intelligence (2014–2016) of Ukraine, Lieutenant General, Doctor of Military Science:

Oleg Gordievsky — a former Soviet spy — an English “mole” in Lubyanka, the role he played in preventing nuclear Armageddon.

Reagan and anecdotes about the Soviet Union.

Watch the Second Part of This Story (in Ukrainian):