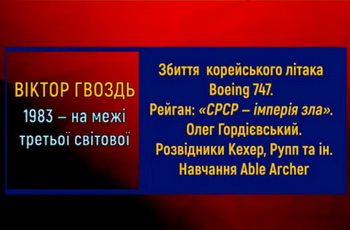 In 1983, the world was on the verge of third world nuclear war.

Shooting down a Korean Boeing 747. Ronald Reagan: “The USSR is an evil empire”. Oleg Gordievsky. Spies Koecher, Rupp and others. Able Archer Exercise. What role did the intelligence agents play in preventing nuclear Armageddon.

Victor Hvozd, the President of the Independent Analytical Center for Geopolitical Studies “Borysfen Intel”, Chief of the Military Intelligence (2008–2010) and Foreign Intelligence (2014–2016) of Ukraine, Lieutenant General, Doctor of Military Science talks about this and other interesting things.

We are telling here not in order to hear another interesting “historical fairy tale”, but we analyze the past, in order to understand the future based on the experience and facts gained from that past. Few people know that in November 1983 the first preventive nuclear strike was planned against Kyiv.

Is it safer to live today? Not. Occupation followed by the annexation of Crimea, occupation of a part of Donbas. Saber-rattling, including nuclear threats, on the border with Ukraine.

That is why, “Praemonitus, praemunitus”.

Watch the First Part of This Story (in Ukrainian):