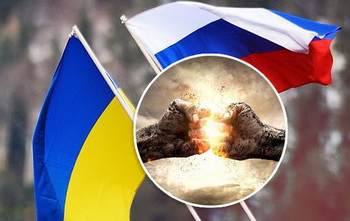 A New Point of View at the Events Around Ukraine

In my previous article, “The Threat of a New Russia’s Attack. Analysis of the Situation Around Ukraine”, I already assessed the reasons for the intensification of Russia’s military activity in the Ukrainian direction. However, lately this situation has become quite indicative and needs appropriate analysis. In particular, this concerns the Ukrainian issue’s reaching a higher level of discussion between the Presidents of the United States and Russia. In fact, this reaffirmed the fundamental importance of Ukraine for both the West and Russia, which have completely opposite interests.

To date, the topic has been the subject of active discussion in political and expert circles of Ukraine and other countries and is widely covered in the media. In the course of the discussion, Russia is again largely seen as a “dominant center of power, capable of dictating its will to other countries, including the United States, NATO and EU members, and Ukraine”. Let’s try to look at it differently.

As you know, December 7, 2021, the Presidents of the United States and Russia held a special closed video conference to discuss the situation around Ukraine. According to most estimates, the conversation between the two leaders hasn’t resulted in any “breakthrough”, but it finally clarified the positions of the parties on the Ukrainian issue.

For example, Russian President V. Putin demanded that the United States provide “clear legally binding guarantees that NATO will not further expand to the east and deploy offensive weapons near Russia’s borders”. According to the established tradition, such demands were justified by “interests of Russia’s national security”, as well as allegations of “pursuing an aggressive anti-Russian policy by the United States and NATO”. Evidence of this was called “the intensification of military exercises and provocations of the United States and NATO against Russia”, as well as “their development of Ukrainian territory”. At this, V. Putin again accused Ukraine (with the support of its Western partners) of preparing for an attack on the “DPR” and “LPR”.

US President Biden’s response to this was much more clear. He flatly refused to provide any guarantees to Moscow on the above-mentioned issues, and also expressed the consolidated will of all Western countries to impose critical sanctions against Russia in case of its new attack on Ukraine. The list of such sanctions has been repeatedly reported in the media and does not require further detail. Note only that according to all forecasts (both Western and Russian experts), they will destroy Russia’s economy within a maximum of two months.

Leaders from Canada, the United Kingdom, Germany, France and a number of other Western countries, as well as NATO and EU leaders, made similar statements. All of them sided with Ukraine, condemned Moscow’s aggressive policy and, in fact, created a “united front” against Russia. And now the question arises: who dictates his will to whom? Russia to the United States and Europe, or they to Moscow? We will try to answer this question.

As I wrote in my previous articles, for now, the United States and NATO, together with Ukraine, have not only equaled their military potential with Russia in the European theatre, but they are superior to it (especially given the possibility of rapid transfer of US troops from the continental United States to Europe). Of course, we may discuss whether our Western partners will provide direct military assistance to Ukraine in case of Russia’s new attack. But this question already has as concrete answer as Biden’s answer to Putin.

In November 2021, the United Kingdom and Canada for the first time openly expressed readiness to deploy their troops in Ukraine. Moreover, not just the training missions, but — special forces. Also, the United States and NATO thwarted Moscow’s plans to gain control of the Black Sea region and effectively forced it to move from an offensive to a defensive strategy. All of these are pretty obvious facts, but they are ignored (or misunderstood) by most politicians, experts, and the media.

Since the beginning of this year, the changes in the situation have shown the US/NATO military exercises at the European theatre, which were openly declared as measures to deter Russia from aggressive actions against their allies and partners, including Ukraine. The US/NATO military-technical assistance to Ukraine, including the transfer of anti-tank missile systems and UAVs, which have already shown their effectiveness in various wars and armed conflicts, had similar goals.

These US/NATO steps are well known and have been analyzed on our website more than once. Their consequences are also known, namely how in the spring of 2021 Russia was forced to abandon a new attack on Ukraine. In fact, this was a geopolitical defeat for Moscow and showed Russia’s inability to implement its plans in the post-Soviet space, at least for Ukraine.

Russia’s military deterrence is also being used by the United States/NATO in the current circumstances. In particular, in November 2021 in the Black Sea, regular naval exercises were conducted with the participation of the American guided missile destroyer Arleigh Burke. In the same context, the transfer of American Island patrol boats to Ukraine, the UK’s decision to allocate additional 1 billion pounds to strengthen Ukraine’s defense, and the EU’s 31 million Euros in military-technical assistance to the Armed Forces of Ukraine.

Thus, Ukraine is already de facto seen by the United States/NATO as an ally of the Alliance, even without its legal status. And no announcement by Russia of new “red lines” hinders the process of our state’s Euro-Atlantic integration. This was once again shown by the results of phone talks between the Presidents of the United States and Ukraine on December 9, 2021. Thus, J. Biden expressed the firm intention of the United States and its allies to give a decisive response to Russia by economic and other measures in the event of its new attack on Ukraine. According to the US President, no decision about Ukraine will be made without Ukraine. J. Biden also assured that Ukraine’s accession to NATO is the choice of the Ukrainian people and members of the Alliance, not of Russia.

The day before, during a meeting of NATO defense ministers, NATO Secretary General J. Stoltenberg reaffirmed the Alliance’s openness to Ukraine and stressed that Russia has no right to block Ukraine’s choice. That is why in the near future Russia can really see US/NATO offensive systems near its borders. Moreover, this is already happening in reality, at least in the form of US strategic aviation flights over Ukraine’s airspace, as well as systematic visits by US/NATO warships to the Ukrainian port of Odesa, which effectively serves as their forward naval base.

In general, these circumstances do have negative consequences for Russia, including increasing tensions on its borders, as Putin and other officials said. However, whom should they blame for this? Only themselves, not the US/NATO and Ukraine. It was Moscow that started the confrontation with the West in 2007, in 2008 it attacked Georgia, in 2014 it attacked Ukraine, and in 2021 it broke the ceasefire in the Donbas and began preparations to expand the military invasion of our country.

And now Russia is objectively “reaping the harvest” of its neo-imperial policy. At this, Moscow’s attempts of military pressure on the United States/NATO and Ukraine only lead to a further unification of their efforts in the confrontation with Russia. In particular, even the Prime Minister of Hungary V. Orban, who has been the main proxy of Moscow’s interests in Europe until now, recognized the fact that Russia’s military aggression against Ukraine got intensified.

The change in the balance of power between the West and Russia in the European theatre, as well as the expansion of support for Ukraine from the United States, NATO and the EU, allowed our country to return to offensive policy in the Donbas. Of course, Ukraine remains committed to a peaceful solution to the conflict, but is not going to indulge the aggressor in any way. For example, since the spring of 2021, in connection with Moscow’s intensification of armed provocations in the conflict zone, Ukraine has resumed retaliatory strikes. At the end of October 2021 for the first time, a Bayraktar TB2 UAV was used for this task. The guided bomb destroyed one of the 122-mm D-30 howitzers of the occupiers’ artillery, which fired at the positions of the Joint Forces Operation of Ukraine.

It was then that the village of Staromaryivka near the settlement of Granitne in Donetsk region was liberated. According to the Minsk-2 agreement, it was to become part of the territories controlled by Ukraine, but remained in the so-called gray zone on the front line. It was from Staromaryivka that Russian snipers operated hiding behind civilians. And now Russia and its satellites in the Donbas are deprived of such an opportunity, at least on the mentioned section of the front line. Moreover, Ukraine has dispelled the aggressors’ confidence in the impunity of their actions due to the unwillingness of the Ukrainian side to aggravate the situation in the conflict zone. Punishment will be inevitable, as Ukraine has shown.

In this regard, the assessments of Russian experts, including national chauvinists, who recognize the ability of the Armed Forces of Ukraine to regain control over the occupied territories of the Donbas within two or three days, are quite significant. But, unlike in the spring of 2021, there are still doubts about Moscow’s ability to actually defend the “DPR” and “LPR” due to the threat of toughening Western sanctions. According to Russian experts, new sanctions will inevitably be imposed on Russia under any circumstances and reasons for its new attack on Ukraine.

However, Moscow has not abandoned its neo-imperial policy or a new attack on Ukraine. This is evidenced by the next intensification of Russia’s military activity near Ukraine with the beginning of the winter training period of the RF Armed Forces in December 2021. In particular, in the Southern Military District of Russia alone, more than ten thousand servicemen were taken to the training grounds together with military equipment. During the first week of the this winter, combat fire was performed by about 500 tank crews. And on the Black Sea Fleet landing operations are being rehearsed again.

And at the end of the article I would like to draw attention to a few more aspects.

As you know, Russia claims to have the right to any military activity on its territory. Under this right, from the mid-1990s to 2000, Moscow waged two wars against the Republic of Ichkeria (Chechnya) in the North Caucasus. At this, the actions of Russian troops killed more than 200,000 civilians — citizens of Russia.

Who can now believe in the sincerity of Moscow’s statements about its intention to protect Russian citizens and the Russian-speaking population of the Donbas. Unless by the same methods as it was done in Chechnya. Therefore, Ukraine also has the full right to protect its citizens from Russia on its own territory, which de jure remains the temporarily occupied districts of Donetsk and Luhansk regions.

P.S. Instead of conclusions on the issues raised, I would like to cite another fact that best describes the situation. I mean the panic in Russia caused by the unarmed ship of the Ukrainian Navy Donbas’ approach to the Kerch Strait on December 9, 2021. The approach of the ship to the mentioned area was seen in Moscow nearly as an “attack on Russia”, to repulse which they involved all available forces, including combat aviation.