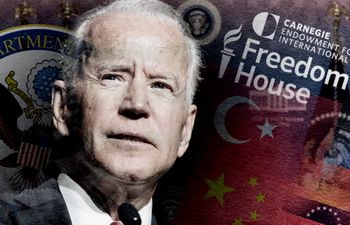 Realpolitik Is the Enemy of Anyone Who Allows Himself Wishful Thinking

Theo Sommer, a veteran of the popular German newspaper Die Zeit, published an article a few days ago analyzing the balance of power between the world’s two geopolitical camps. As an expert, he is critical of Washington’s policies in general and those of US President Joe Biden. Symbolically, he calls two such camps Evil and Good, where Good is a democracy led by the United States and Evil is represented by China and its satellites. The analyst points out that in reality the world order is not as straightforward as the United States, led by Democrat Joe Biden, declares.

The division of the world for ideological reasons into two hostile camps will hamper the multilateral cooperation. The author of the article is convinced that realpolitik is needed in the field of foreign relations. The inventor of this term was August Ludwig von Rochau. At present, von Rochau’s definition is still relevant and should lie on Joe Biden’s desk: “Realpolitik is moving not in the foggy future, but in the real perspective of the present. It defines its task not in the realization of uncertain ideals, but in the achievement of specific goals. Realpolitik is finally the enemy of anyone who allows himself wishful thinking. For this policy, it is a matter of conscience and honor to see people and things as they really are, and to strive accordingly for what it is really capable of”.