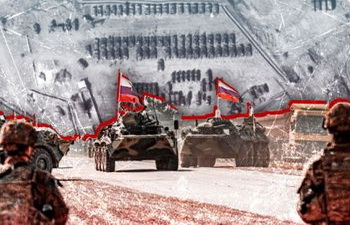 Analysis of the Situation Around Ukraine

Since November 2021 Ukrainian and foreign politicians and experts have been pointing out the growing threat of a new Russia’s attack on Ukraine, which may take place in January–February 2022. The reason for this is called Russia’s creation of a powerful grouping of troops directed against Ukraine. Such a threat does exist and is becoming increasingly urgent. Especially in the context of Russia’s de facto disruption of the ceasefire in the Donbas, as well as the intensification of Moscow’s belligerent rhetoric towards Ukraine and the West. All this directly affects the interests of Ukraine and requires more detailed consideration.

Since the beginning of 2021, the issue of the growing threat of expanding the scale of Russia’s armed aggression against Ukraine has been systematically raised in the political and expert environment of our state and other countries. As you know, this is due to Moscow’s return to an openly aggressive policy towards Ukraine after our state refused to accept Russia’s plan to “settle” the conflict in the Donbas. This position of Ukraine actually thwarted Russia’s intentions to regain control over it after the change of Ukrainian leadership in 2019. Moreover, contrary to Moscow’s expectations, relations between Ukraine and the United States, NATO and the EU have not only weakened, but have reached a qualitatively new level. As a result, the Kremlin’s plans to use Ukraine for its geopolitical purposes, including to strengthen Russia’s positions in the confrontation with the West, were undermined.

In turn, deepening cooperation with Ukraine has allowed the United States, NATO and the EU to gain additional opportunities to deter Russia. At this, the most important aspect for the EU was the increasing role of Ukraine as a buffer zone between Europe and Russia, and for the United States and NATO — to bring their forward military presence closer to Russia’s borders.

In general, these circumstances have led to fundamental changes in the situation around Ukraine, which have negative consequences for Russia and positive — for the West. Today, Moscow is trying to reverse this trend in its favor, and the United States, NATO and the EU are consolidating and developing it. As part of such policies, both sides are “increasing stakes” by moving to larger demonstrations of the possibility of using military force to achieve their goals.

This is exactly what Moscow’s steps to disrupt the ceasefire in the Donbas and provoke military tensions on the border with Ukraine have shown. Due to this, Russia is trying to put pressure on Ukraine over the Donbas and Kyiv’s cooperation with the West. Similarly, Moscow still hopes to intimidate the United States, NATO and the EU by blackmailing them with its military force, as well as the possibility of the conflict in the Donbas escalating into a much larger zone of armed confrontation throughout eastern and southern Ukraine.

So far, such steps by Russia have been largely demonstrative and did not show any signs of direct preparation for a new attack on Ukraine. In particular, even during the peak period of intensification of Russian military activity on the Ukrainian direction in the spring of 2021, Russia did not withdraw its troops to the forward areas to conduct an offensive against Ukraine, nor did it take full measures to deploy necessary infrastructure and stockpile supplies.

Unlike in 2014, there was no mass redeployment of Russian troops from Russia’s rear areas to the border with Ukraine, nor was their second echelon created in the rear areas of the Western and Southern Military Districts of the RF Armed Forces. An exception was the transfer to the Crimea of several battalion tactical groups from the 49th and 58thCombined Arms Armies of the Southern Military District, as well as the 7th and 76th Airborne Assault Divisions of the Russian Armed Forces. Some units from the Central Military District of the Russian Armed Forces were also transferred to one of the training grounds in Voronezh region of Russia. In addition, a unit of marines of the Caspian Flotilla was landed on the coast of the Sea of Azov in Rostov region of the Russian Federation.

Due to such actions, Russia has strengthened its troops, which has been deployed near Ukraine and its occupied and annexed territories since 2014 on a permanent basis. However, it was still not enough for conducting a full-scale offensive against Ukraine. Especially in the conditions of strengthening of Ukraine’s defense, first of all, on the most threatening — Donetsk and Crimean directions. A similar situation took place in the autumn of 2021 during Russia’s exercise “West-2021”, as well as inspections of troops during the summer training period.

At the same time, some limitations of Russia’s military preparations, which were discussed above, do not mean that it does not have intentions or plans to attack Ukraine and actually work them out during the exercises (including in the spring and autumn of 2021). This is exactly what the transfer of some units of the Russian Armed Forces to Voronezh and Rostov regions of Russia and the annexed Crimea showed, which meant larger-scale movements of troops. At this, the possibilities of their transportation and further combat use were checked.

Given the above circumstances, Russia can indeed launch a new attack on Ukraine in the winter or spring of 2022 under the guise of operational and combat training of the Russian Armed Forces during the winter training period (starting on December 1 each year). Through this, Moscow will try to: at least — expand the territories of Ukraine under its control and de facto establish its military presence there (as was done in 2008 in Abkhazia and South Ossetia); at most — to achieve its strategic goals for the disintegration of Ukraine.

Evidence of this is the maintenance of a high level of Russian military activity near Ukraine, as well as the resumption of Moscow’s aggressive political and information campaign accusing Ukraine of preparing to establish control over the “DPR” and “”LPR”. Moscow keeps stating that such intentions are supported by the United States and NATO, which increase the supply of weapons and military equipment for the Ukrainian army and navy, as well as increase pressure on Russia.

Based on the experience of Russia’s armed aggression against Georgia in 2008, such accusations could be used by Moscow as an excuse to expand the scale of the military invasion of Ukraine under the “Ossetia scenario”. This was in fact confirmed by the Foreign Intelligence Service of the Russian Federation, which issued a special statement comparing Ukraine with Georgia in 2008. The statements of representatives of the top state leadership of the Russian Federation regarding “Ukraine’s deliberate escalation of tensions and attempts to present Moscow as a party threatening the peace process in the Donbas” are based on such presumptions. According to the Kremlin, this is “a camouflage to cover up Kyiv’s aggressive intentions towards the Donbas”.

However, so far, the deterrents for Russia remain the inevitability of significant losses of its armed forces, as well as the prospect of a significant increase in losses to the Russian economy due to the strengthening of Western sanctions. However, the Putin regime may neglect this in order to prevent the final loss of Ukraine and its full moving to the sphere of responsibility of the West. At this, Moscow will rely on the totalitarian nature of the Russian government, which will suppress the country’s dissatisfaction with the negative consequences of Russia’s attack on Ukraine. Moreover, such consequences will be used by the Kremlin to consolidate Russian society around itself as it did after the start of the aggression against Ukraine in 2014.

Equally demonstrative are the efforts of the United States, NATO, and the European Union to counter Russia’s aggressive policy. First steps in this direction were taken back in 2014. However, recently they have acquired a qualitatively new meaning. Thus, in 2020, the United States/NATO began conducting strategic exercises such as DEFENDER-Europe, the scale of which actually corresponds to the strategic exercises of the Russian Armed Forces “West” and “Caucasus”. In addition, the United States/NATO resumed large-scale exercises of the Strategic Nuclear Forces. In particular, during the US Global Thunder exercise in November 2021, ten strategic bombers simulated strikes on Russia from the west and east.

In addition, the United States and NATO have adopted a number of new conceptual documents in the field of military deterrence of Russia, launched the deployment of combat units typical of the last Cold War (especially in the Baltic and Black Sea regions), and accelerated the adoption of new weapons (in  particular, nuclear-capable multi-purpose fighters F-35).

All this has allowed the US/NATO to effectively catch up with Russia in terms of the strength of its armed forces in the European Theatre and to take a firm and more consolidated position on it. An example of this was the actions of the West to prevent Russia’s attack on Ukraine in the spring of 2021. As you know, they included massive political pressure on Russia, the announcement of readiness to impose new economic critical sanctions, demonstrations of military force in the Black Sea region and strengthening of military-technical assistance to Ukraine.

The same is happening at the present stage of Moscow’s preparations for a possible attack on Ukraine. Thus, Ukraine’s Western partners have in fact created a “united front” of pressure on Russia in all directions. Besides, assistance to Ukraine in strengthening its defense is increasing. This does not exclude the possibility of transferring new types of lethal weapons, in particular, portable air-defense systems Stinger.

Moreover, some NATO countries are considering deploying their troops on Ukrainian territory. Such plans are not openly disclosed, but are published by the various media. In particular, according to CNN and other media outlets: the United States plans to send military advisers to Kyiv; the United Kingdom — some units from the Special Air Service and the Special Reconnaissance Regiment; Canada — CF-18 fighters, which are currently deployed in Romania. In addition, in December 2021 regular naval exercises of the United States and its allies and partners are planned in the Black Sea with the participation of the American guided missile destroyer USS Arleigh Burke (DDG-51).

Of course, this does not mean the possibility of US/NATO direct military assistance to Ukraine, but it is an additional deterrent for Russia. In fact, the above mentioned US/NATO actions already testify to their consideration of Ukraine as an ally of the North Atlantic Alliance. Despite Moscow’s announcement of new “red lines” regarding the possibility of Ukraine gaining full membership in the Alliance, this fact is already openly acknowledged by Russia.

Thus, Russia really wants to achieve a “final solution to the Ukrainian question” by all possible means, including the use of force. Moscow is really preparing for this and is quite obviously preparing for the implementation of the “Ossetia scenario”.

However, Ukraine is not Georgia at all, and now it is no longer 2008 or 2014. That is why Moscow’s new attack on Ukraine will have catastrophic consequences for Russia itself. By the way, Moscow understands this, in particular, on the example of Ukraine’s using in October 2021 Bayraktar TB2 drone to destroy the artillery battery of Russian troops in the Donbas, which fired on Ukrainian positions.

Like the Nagorno-Karabakh war last autumn, the case reaffirmed the effectiveness of such UAVs (and, in fact, other new weapons received by Ukraine), and is a clear indication of the inevitability of Russia’s critical losses if its aggression against Ukraine expands.

Therefore, it is really possible to restrain Moscow. This requires only maintaining the determination of the positions of Ukraine and its Western partners.