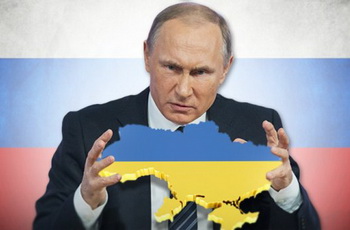 The Russian military aggression committed against Ukraine by the Putin regime in early 2014 produced an irreversible destruction of the existing world order, established in the international relations after 1975 (by the Helsinki Final Act of the Conference on Security and Cooperation in Europe). This destruction affected not only one of the largest countries in Europe — Ukraine, but also the fates of individuals, families and entire nations that lived on Ukrainian land for decades and centuries.

The terrible tragedy of this destruction (as a consequence of Russian aggression) is in the fact that it had split the mind and conscience of millions of people:

It was strange for me to hear and see that many influential, respected politicians get lost among the false notions and definitions (speaking: “internal Ukrainian armed conflict”, “the civil war in Ukraine” etc.). While, for example, the young cadets of the Royal Danish Defense College, with whom I worked for several years, accurately, unmistakably named both the date of the official declaration of war on Ukraine by Russia (March 1, 2014), and the time of its actual commencement, and its real consequences — the capture and occupation of part of the Ukrainian sovereign territory by Russia.

Russia has openly, rudely violated the norms of international law, the fundamental principles of peaceful coexistence and cooperation of the states, the inviolability of their borders, enshrined by the Helsinki Final Act of 1975. Russia also has trampled on other international treaties to which it was a party (such as the Budapest Memorandum of 1994, the so-called “Big” Ukrainian-Russian Treaty on Friendship, Cooperation and Partnership of 1997, and the Agreement on the Status and Conditions of the Black Sea Fleet’s Stay in Ukraine of 1997, etc.).

Everyone in the world understands that Putin threw a very insolent, cheeky challenge to the international world community. At the same time — a very risky (for him) challenge. Therefore, for such actions, there should be very important, weighty reasons, as Putin was undoubtedly aware of the great risk to receive cruel retribution for aggression against peace, for bloodshed, for killings people. So, what were the reasons for this, what were the “driving forces” of these Putin’s actions in early 2014?

Everyone who attentively watched and analyzed the history of Putin’s power, as well as changes in recent years in the economic and political life of Russia, had to notice that during Putin’s time at the top of power, the Russian economy and national wealth were rapidly depleting.

And there were the following main reasons for it:

Even this list, far from being complete, gave reason to believe that Putin’s criminal-KGB’s “team” had no prospects in the nearest future to stay in power and therefore — no prospects of unlimited disposal of the resources of the largest state territory in the world. As well as — no prospects to be able to save in the personal property a huge wealth of criminal origin. At best, this criminal “team” could only have the perspective of going into oblivion and losing its former omnipotence. But at worst case … — I don’t know, I can’t even assume.

Beyond doubt, for Putin’s criminal-KGB’s regime, these reasons were quite enough to go “Va Banque” in their struggle to preserve power. And Ukraine just happened to be at the intersection of three of Putin’s “target designations”, tasks:

Today, the best of all, Putin has succeeded in implementing the second task of his plan. Not so successfully Putin is implementing the third task, as the process of achieving the goal is still ongoing. The West also is “in the process”: it is still looking for relevant solutions. But the West “plays” by its own civilized rules (unlike Putin). It’s difficult today to guess where and when this “game” will stop.

Unfortunately, the only thing that is clear: Ukraine is neither a player in this game nor a chess figure. Ukraine is only a “chessboard” on which Western leaders are still playing chess, but Putin — from the very beginning — played hockey, on this chessboard.

The so-called “Minsk process” is proof of it. The famous “Minsk Agreements” is The Big Lie. Therefore, Putin is the most comfortable with this big lie. The West, European Union are still developing their attitude: to consider “Minsk Agreements” as an achievement (the real, valid, and effective international treaties) or — not. Ukraine is not satisfied with them at all. (If it suits Ukraine at least a little bit, then no more than the 1938 Munich Agreement suited Czechoslovakia before the Second World War).

The international community (especially the European community) must finally face the truth: Putin’s Russia committed an act of military aggression against a European state. The aggressor must be punished, just as the USSR was punished in 1939 for aggression against sovereign Finland. At that time (before the Second World War) the world community excluded the aggressor from the League of Nations. But today, in a global, interconnected world, there are more opportunities and tools for impact on persons and the states, committing crimes, killing thousands of people.

The financial and economic sanctions against Russia because of the military aggression against Ukraine are very far from a commensurate, adequate response to its criminal actions. And they are not the only possible. The West, the Democratic Europe must realize that the aggressor, intoxicated with impunity, is not able to stop until it receives a cruel repulse and inevitable retribution.

In Ukraine, the Russian aggressor still has not stopped and has not been punished for his crimes. Will Europe wait to see who will be chosen by the Putin horde as the next victim of its aggression? This question is very close and similar to the famous Hamlet’s question: “To be or not to be, that is the question?”