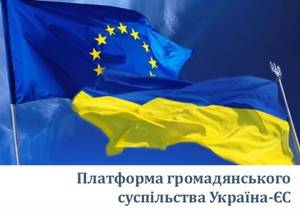 born in 1995,
student of the Institute of International Relations of Kyiv Taras Shevchenko National University,

Among the international agreements concluded by the European Union with other countries and international organizations, a special role in bringing the EU’s partner countries to European integration, is played by Association Agreements. They are one of the most powerful legal instruments allowing these countries together with the EU to create an area of stability and economic, political and legal cooperation. The Association Agreement between Ukraine and the EU was fully signed June 27, 2014 and ratified by both Verkhovna Rada (Ukrainian Parliament) and the European Parliament on 16 September 2014. From January 1, 2016 the Agreement on the so-called “Deep and Comprehensive Free Trade Area” has come into force.

Of particular interest to our research is the Civil Society Platform as it is for the first time that we have to deal with this kind of institution created exclusively for the public. No other international agreement in Ukraine’s or in the EU’s experience provides for creation of an institution with such a role and functions.

So, the Civil Society Platform (CSP) is a civil society body which is established under Articles 469-470 of the AA. It consists of representatives of Ukraine’s civil society, on the one hand, and members of the European Economic and Social Committee (EESC) — on the other (Article 469 of the AA). The CSP is a forum for such representatives’ meetings (held with regularity, chosen by the CSP independently), and exchanging ideas. As for the presidency in the CSP, it carried out in turn, respectively: by representatives of civil society — from the Ukrainian side and by representative of the EESC — in accordance with the provisions of its regulations. 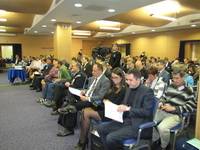 The process of formation of the CSP was launched in May 2014, when the Ukrainian side of the CSP, as a result of public discussion, created the Organizational Committee. November 7, 2014 the Constituent Assembly of the CSP Ukrainian side was held where more than 165 NGOs from across the country chose 15 participants of the CSP Ukrainian side with one-year mandate, representing three sectors: trade unions, employers and other civil society organizations. At this, they are the coordinators of the 15 working groups established under the thematic sections of the Agreement.

The Constituent Assembly of the CSP took place April 16, 2015, so this is the official date of the beginning of this institution’s activity. It was then that the CSP Regulations were approved too. It is envisaged that the Association Committee and Association Parliamentary Committee will carry out regular contacts with representatives of the Civil Society Platform in order to learn their views on achieving the objectives of the Agreement. According to the CSP Regulations, each CSP party is formed of 15 members representing the already mentioned three sectors: trade unions, employers and other civil society organizations.

The European Union’s party consists of nine members of the European Economic and Social Committee (EESC), selected by the competent authorities and not more than six representatives of leading European organizations representing the civil society as permanent observers. It is assumed that if necessary, the EESC in its sole discretion may change the proportional representation of members and observers from the EU, but the total number of members should not exceed 15 people. 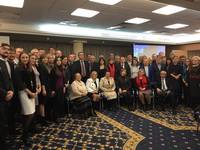 The Ukrainian side consists of 9 members representing organizations of trade unions, employers and other civil society organizations: 3 representatives from each of the sectors that are delegated by their competent authorities according to their own procedures, as well as 6 heads of thematic working groups (in accordance with the structure of the AA), elected by the Assembly. Among the members elected by the Assembly, there should be at least one representative of each of the three sectors.

Apart from regular members and observers, depending on the topics to be discussed during the meetings, other NGOs, experts and representatives of European and international institutions may be invited to participate. Additional experts in different spheres can also be involved in the work.

The list of CSP members and permanent observers changes every 2.5 years, which coincides with the changing the term of office of the EESC members. Members of the Ukrainian side of the CSP cannot be elected for more than two consecutive terms (i.e., the total duration of office is 5 years).

As for the meetings, they are held alternately twice a year — in the EU (EESC Headquarters in Brussels) and in Ukraine. If necessary, the frequency of the meetings can be revised.

Regarding the CSP monitoring mechanism, Article 470 of the AA provides that the CSP should be informed of the Association Council’s decisions and recommendations. Besides, the CSP can express its views within its competence, in the form of recommendations, opinions, statements, assessments, reports, position papers, letters or any other similar means, which it considers appropriate. The Association Committee and the Association Parliamentary Committee must have regular contacts with CSP representatives to learn their opinions (estimates) on achieving/failure to achieve the AA goals. 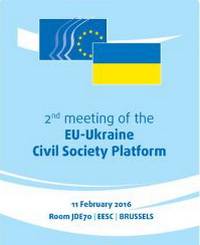 As for the results of the CSP’s work, they are not obvious today, since February 11, 2016 in Brussels there was only the second meeting of the CSP. Its participants discussed the current state of implementation of the Association Agreement and the related reforms, as well as the main obstacles on this way. The meeting heard two thematic reports of the CSP, recognized most important for the CSP’s analysis in 2015 — anti-corruption policy and energy. As a result of all the discussions, the meeting adopted the Joint Declaration. It also made the rotation of the leadership of the Ukrainian side of the CSP — Chairman of the Federation of Trade Unions of Ukraine Hryhoriy Osovyi was elected the head of the CSP for the next 10 months.

Thus, the CSP members stressed the importance of human rights throughout the territory of Ukraine and in particular in the annexed Crimea (first of all, of the Crimean Tatars who suffer from discrimination) and in the districts of Donbas not controlled by Ukraine. It approved the National Strategy on Human Rights and emphasized the lack of positive changes, especially regarding freedom of word, protection of children and people suffering from severe conditions (IDPs), people living in and around the conflict zone). The members of the CSP will ask the EU to increase the aid to IDPs — to protect human rights, especially in remote rural areas.

Besides, it emphasized the need to ensure timely and proper implementation of the Anti-Corruption Strategy for 2014-2017 years together with experts from civil society and international organizations. The CSP members urged the Government of Ukraine to carry out deoligarchisation and demonopolization of the energy sector and to ensure the full application of the rules of transparency and proper management practices (standards of the Organization for Economic Cooperation and Development /OECD/) in companies of the sector in order to increase their potential competitiveness in the energy market.

In the context of the ongoing decentralization reform, the CSP calls on the EU institutions to help regional and local authorities and civil society of Ukraine to intensify the exchange of experiences and best practices with the EU in the sphere of local energy planning and management.

March 24, 2016 was the first meeting of the Deputy Minister of the Cabinet of Ministers of Ukraine — Director of the Government Office for European Integration Natalia Hnydyuk and other Minister Deputies for the European integration, with the Ukrainian side of the CSP and other organizations.

The aim of this meeting was of the constitutive nature and was associated with Ukraine’s commitments under the AA, including a regular dialogue between the executive branch of the government and civil society for professional discussion of the agenda of the implementation of the Association Agreement. According to N. Hnydyuk, it is the civil society that bares a heavy burden of generalization of the authorities’ work — preparation of the complex, professional and analytical assessment of the implementation of the Agreement. Therefore the Government is interested in receiving from the public professional objective assessment/the cost of European integration reforms and qualified analysis of efficiency of Ukraine’s adaptation of the Ukrainian Law to the European Law (EU law), including discussions on certain laws. In their turn, representatives of the CSP Ukrainian side have submitted two reports mentioned above (on the anticorruption policy and energy) and stressed the need for the Ukrainian civil society’s more active participation in shaping the policy both at the national and regional levels.

What Do We Definitely Have? 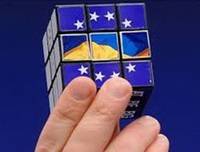 1. The powers of the Civil Society Platform are very limited because it is not the only body that will monitor the implementation of the Association Agreement, as it will produce only one (1) conclusion in six months, while the AA questions cover a wide variety of spheres. Perhaps its competence will be extended under the CSP Regulations revision in 2017, which of course will take place with the consent of the EESC and other bodies set for implementation of the AA.

2. Besides, in accordance with its Regulations, the Civil Society Platform can express its views within the competence only in the form of recommendations, opinions, statements, assessments, reports, position papers, letters or any similar means, which it considers appropriate. That is, as we see, the tools, which the CSP has, are mainly represented by acts of recommendatory nature, but they will be effective if they are taken into consideration by the Government and other bodies established under the Association Agreement.

4. Only having made the European integration reforms a task for the whole of our society, we will make true the full European perspective for Ukraine. However, since this is new for the Ukrainian civil society, we have yet to acquire the European standard democratic procedures, learn to find compromises and understanding on fundamental issues of European integration. As for the results of activity of the Civil Society Platform, we will closely monitor its work and, in turn, assess the efficiency, because we also are an integral part of the civil society in Ukraine!