Now we can state that during the warm winter of 2016/2017 the gas potential of Ukraine was successfully tested. We managed to stop gas withdrawal from underground storage facilities (UGS) and even began to pump it into those storages, actually preparing for the next heating season. In this context, I want to point out that the media and the expert environment almost “did not notice” this time that we for the first time started the latest heating season with a gas reserve slightly larger than 15 billion cubic meters, and not as before — with at least 17–19 billion.

I would like to draw your attention to the fact that until recently Russia demanded from us to have at least 17–19 billion cubic meters of gas in Ukrainian UGS facilities, which should ensure uninterrupted transit of Russian gas through Ukrainian territory. Considering this information, similar demands would come from Europe, including from the EC. Our experts from the gas sphere also agreed with those demands. For example, before the 2009/2010 heating season, at the request of the then President of Ukraine V. Yushchenko, the government informed about the need to have at least 17–19 billion cubic meters of gas in UGS. That is, compared to last year’s reserves, at that time we had to have 2–4 billion cubic meters more gas. To be pumped into Ukrainian UGS, that gas had to be bought. Naftogaz of Ukraine, authorized to purchase all gas, in 2009 had to pay about 1 billion US dollars more for imports than in 2016. This task was solved, as a rule, by lending.

So, before the start of the heating season 2016/2017 in the Ukrainian UGS there were only 15 billion cubic meters of gas (that is, 2–4 billion less than before). And Russians, Europeans, and, accordingly, our experts, quietly agreed to this.

Then the banal question arises: why in order to ensure the transit of Russian gas to Europe at that time, it was necessary to pump more gas into Ukrainian UGS facilities than today? Perhaps, then Russia would take provocative actions to weaken our state and discredit its leadership? It can also be assumed that the “gas workers” of the EC did not want to object to the Russians, etc. But can one believe in such annoying mistakes made by Ukrainian specialists from the gas sector (many of whom have well-deserved world recognition) in calculating the minimum of gas reserves to ensure the transit of Russian gas to Europe, on the basis of which political decisions were taken on gas reserves in our UGS?

Most likely, all the above mentioned and other factors took place. Besides, it is important that European countries have managed to reduce the daily consumption of Russian gas in, in particular, due to the use of energy-saving technologies. 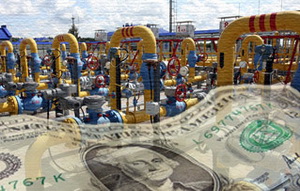 Despite the fact that Ukraine has not been buying Russian gas for more than a year, and the countries of Europe continue this tradition, in the context of this material it is advisable to focus on securing the transit of Russian gas through our territory. There are many parameters that determine certain gas reserves in Ukrainian UGS. Most of them depend on the efficiency of technologies for converting gas into final products (in particular, heat). A radical increase in the effectiveness of “gas” technology in the EU actually began in the late 1990s and continues to this day. So, already in the period of 2005–2009 there could have been less than 17–19 billion cubic meters of gas in Ukrainian UGS to ensure transit of Russian gas to European countries. That is, the amount of borrowing for gas should have been less than it actually was. Unfortunately, accurate estimates were not used to inform political decision-makers about the minimum gas reserves in Ukrainian UGS, and then — about financial borrowing for the fulfillment of our state’s obligations. All specialists (both Russian, European, and Ukrainian) used for this old “Soviet” data. Of course (and unfortunately), without proper updating.