Discussing about the Crimean Tatar electricity blockade of the Crimea in the Verkhovna Rada of Ukraine, November 13, 2015 the Minister of Energy and Coal Industry of Ukraine V. Demchyshyn, among other things, said that Ukraine will not stop supplying electricity to the occupied Crimea. This way he, so to speak, is going to get on the right side of those Crimean residents who believe in Ukraine as their own state. They should not be deprived of Ukrainian electricity. The Minister is both right and wrong.

He is right in that indeed we should not leave without electric power those citizens of Ukraine who live in the Crimea, and believe in our state. In particular, I mean those citizens who see their future with Ukraine, but do not support the current energy blockade of the Crimea.

The Minister is wrong at least because this approach destroys the idea of ​​an energy blockade and turns it into a vapid and even absurd impolitic action not coordinated properly and supported by the leadership of the state. Most likely, the current blockade is limited to preventing smuggling through the Crimea to Russia. But for this, there are other government agencies whose work is paid by the Ukrainian society. Besides, supplying electricity to the Crimea, in particular to industrial consumers, who pay taxes to the Russian budget, that is, pay for the Russian aggression against Ukraine, we ourselves actually support the Russian aggressor.

In this context, the vast majority of problematic issues is relevant today.

First. In general, different political measures, in particular, actions like the blockade, the return of the Crimea and the like — are not the duties of the Ministry of Energy of Ukraine. Its work is to supply, in particular, with electricity all its Ukrainian consumers, without taking into account their political, ethnic, religious, etc. beliefs. Solving political problems and restoring order in the trade are the duties of other structures. This shows, most likely that the Minister of Energy of Ukraine on 13 November in the Verkhovna Rada of Ukraine expressed not his, but someone else’s thoughts.

On the other hand, all this proves once again that Ukraine is not ready for electric power outages in the part of its territory. Apparently, the main reason is the lack of information on electricity consumers and their needs, which is an important component of national security. Besides, it also testifies to the Crimea’s being absolutely unready to do without Ukrainian electricity.

It is obvious that from the international legal point of view, Ukraine long ago (since the occupation of the Crimea by Russia) should have stopped supplying electricity to the Peninsula. But from the moral point of view, we should supply the minimum needed for the survival of the Crimean population amounts of electricity — for maternity homes, hospitals (intensive care wards), veterans’ homes and so on. Comprehensive information about this should have been given to the population of the mainland and the Crimea in Ukraine and abroad. This way Ukraine’s actions would be understood both, in this country itself and in the whole world. This way, Ukraine would have not been ever accused of absence of human ethics and morality. Only then let the Russian occupier (aggressor) “distributes electricity” and try to justify himself in the eyes of the Crimean people and the world. Nobody would understand him. That is, if the Crimean puppet regime and its Russian masters “redistribute electricity”, then it will be on their conscience and honor, if they have them.

As it is, Ukraine until recently (until November 21, 2015) constantly and obediently had been supplying electricity to the Crimea, including businesses, infrastructure and even military units of the occupier-state.

On the other hand, today in Ukraine there is no information on how much exactly electric energy is needed for the survival of the Crimean people. Ukrainian patriots- statesmen at the very beginning of Ukraine’s independence did plan to carry out such an inventory. In 1992, the initiative was put forward by the then People’s Deputy of Ukraine I. Yuhnovskyi. There were also other such ideas. Last time (as far as the author of these lines knows) a comprehensive inventory of our needs and capabilities, including in the electricity sector, was mentioned in 2007-2009. But, unfortunately, the Ukrainian public knows nothing about the conduct and results of this inventory.

If such data are available, it is not a problem within a month to technically arrange the supply of electric power to the Crimea only in volumes needed by the abovementioned consumers that cannot be shut down. That is, to supply to the Crimea only the amount of electricity which is the minimum necessary to sustain life. All this had to be explained in detail with the help of the media to the population of the Peninsula, mainland Ukraine, Europe and the whole world.

At the same time, the persistent blocking of inventory of our needs and capabilities in supplying the electric power is further evidence of existence in Ukraine, in particular, in the energy sector, of a powerful anti-Ukrainian “fifth column.” 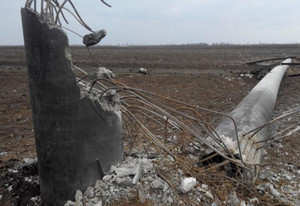 Second. There are various ways to assess and characterize the diversions that took place during the night between the 21st and 22nd of November 2015 on power lines (ETL) from mainland Ukraine to the Crimea. But all this is nothing more than guesswork. Final conclusions can be made only by investigation enjoying peoples’ trusting.

In fact, in my opinion, the accident at the power lines (whether as a result of the explosion or for some other reason) demonstrated the readiness of the Ukrainian energy system to an emergency shutdown of a powerful consumer, which is the Crimea. At first glance, there seems to be no negative consequences either for the energy system, or for the people. All this is another evidence of the high professionalism of the Ukrainian energy engineers and the high technical reliability of our energy system.

But in practice, as it turns out, for the time of the occupation of the Crimea (and even from the beginning of the blockade!), we have not developed specific written instructions for the personnel of generation, distribution, and other involved energy companies on how to act and what to do in case of emergency, etc. That is, the real readiness is out of the question.

In this situation there remains a rhetorical question about what would happen if Russian occupants-saboteurs themselves arranged such a diversion in the occupied territory (for example, in the Crimea or in the Donbas), which is now out of Ukraine’s control? Loosening the Ukrainian energy system, so to speak, from the outside? What if the current blowing up of the ETL in Kherson region is the work of Russian intelligence and subversive groups that by such acts of sabotage on the Ukrainian territory are testing our strength?

Well, the aim of this (the undermining of power lines on the territory of Ukraine) is also not a big secret: to create preconditions for the accident (or, God forbid, an accident!!!) at two nuclear power plants and in such a way to intimidate Europe, and therefore to actually completely turn it away from Ukraine! What for does Europe need such nuclear contagion, which again will move from Ukraine and again to Europe?

That is, you can also confidently say that Ukraine turned out to be absolutely not ready to undermining the power lines at the “entrance” into the Crimea, although the Russian occupation has been for almost two years.

Third. The excitement in the media on November 22 this year, such as “… it is very dangerous for emergency reduction of power demand at nuclear power plants”, “…so many settlements in Kherson and Mykolaiv regions remained without electricity”, “Russia… has stopped supplying anthracite to seven Ukrainian thermal power plants”, and the like, once again indicates the presence in the energy sector of the “fifth column” of which Ukrainian law enforcement authorities should take care.

Fourth. All the unindifferent Ukrainians are surprised that the blockade and actual power outage of the occupied Crimea was initiated purely by the public, not by the Ukrainian state authorities. Special attention should be paid to how this issue is perceived abroad. Because international agencies actively broadcast that solely on the initiative of the Ukrainian public, the electricity supply to the occupied Crimea was stopped. At this, foreign TV “with Russia’s helping hand”, as a rule, shows the “totally unpowered Crimea” and never — de-energized settlements of Kherson and Mykolaiv regions, and comments that “… the Ukrainian state is unable or unwilling to control the situation and, in accordance with its responsibilities, does not seek to control the situation with electric power supply /non-delivery to the occupier /aggressor)”. At the same time, the Ukrainian side neither denies nor explains: why the public with its initiatives (volunteer movement, blocking the occupied Crimea, and so on) is ahead of the government on this issue.

And who will believe and respect us after this?