In connection with the blocking of anthracite coal shipments from occupied territory to the Ukrainian thermal power plants, among other things, the following should be noted:

Firstly, to solve this problem within the time for which there are enough coal reserves at our power plants and thermal power plants, through the supply of anthracite coal from elsewhere (e.g., from South Africa, Vietnam, Australia, USA, etc.) — is not real, because, if nothing else, it takes a relatively longer time than the officials usually report and needs the infrastructure which our country does not have at the moment. And to transfer the thermal power plants to burning the gas group coal instead of anthracite would take one to two years, not to mention the money needed for introduction of appropriate technologies;

Secondly, about half of Ukrainian thermal power stations are equipped to burn anthracite coal group, which is mined only in the occupied territories. Almost all these thermal power plants were designed in Soviet times, with reference to the particular mines;

Thirdly, in many countries, the thermal energy, in contrast to Ukraine with its significant sector of nuclear energy, is the basis of the national electric power, despite the fact that they almost never use hard coal as an energy fuel. They burn coal of gas group. For example, in neighboring Poland, where there are almost twice as many thermal power stations as in Ukraine, they actually do not mine anthracite, but coal of gas group. There the majority of power plants and thermal power plants are equipped to burn coal of both, anthracite and gas groups. Thus, the power plants have a choice: if there is hard coal bought by bargain at low price-good; there is no anthracite, only a gas coal — no problem either. Thus, thermal energy can be adjusted for a certain fuel without imposing emergency and so on. Of course, anthracite coal as a fuel has many advantages: in particular, it is environmentally friendly, with good heat output, etc. But these benefits are not critical where it comes to functioning of the energy sector; 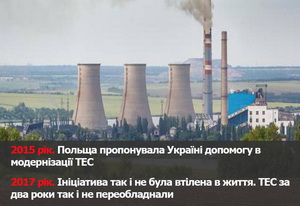 Fourthly, as for the Ukrainian thermal power plants, it has repeatedly been offered to equip the relevant power plants and thermal power plants to burn both types (depending on the situation) coal. At this, the main were economic reasons, because until 2014 no one even had tried to imagine Russia’s occupation. In particular, in 2008, on the initiative of the then Ukrainian President, and in April 2015, when the Polish President during his visit to Kiev, expressed his country’s readiness to allocate for this purpose about 50 million Euros. In general, according to some experts, such additional equipment of our power plants and thermal power plants would cost about 1 billion US dollars. Although some officials then voiced a different sum — 5–6 billion US dollars. Anyway, these proposals were ignored.

Besides, it turns out that the blockade of coal supply from the occupied territory to the Ukrainian power plants and thermal power plants also showed a weak spot in our security strategy. After all, we themselves prompt the enemy that a blockade of supplying anthracite can be a disaster for us. And here we must admit that over the 3 years of the war, we have not prepared for this form of attack! Now it is clear that exactly this will be blocked by our enemies in order to destabilize (“loosen”) Ukraine, exactly what the Kremlin aims at. For the Russian Federation this is cheaper, and safer from the point of view of its violation of international law, for example, than throwing here its “Grads” or tanks. What can we do? Whom to complain to? Would it solve the problem of the Ukrainian energy’s dependence on anthracite?

Besides, it is possible that the current blockers will arrange free delivery of lawfully issued coal, blocking the rest of the goods. They do have similar experience — passenger travels are not blocked. What will then do and say the opponents of the blockade? Who will be responsible for the “horror stories”, etc.? Will this will solve the urgent problem? Will the illegal movement of other goods stop?