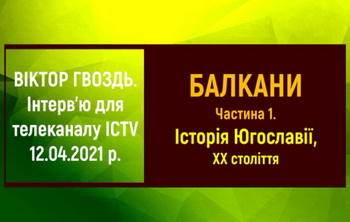 Part 1. The History of the Disintegration of Yugoslavia

Victor Hvozd — the Head of the Foreign Intelligence Service of Ukraine (2014–2016), Lieutenant General, Doctor of Military Sciences — in an interview with ICTV journalist Taras Shako.

To understand the history of the Yugoslav Wars (de facto civil wars) we must turn to the milestones of the historical development of the situation in that country (in the international context included), which had led to the bloody events in the Western Balkans.

The biggest military conflict in Central Europe since World War II. The “Ten Day War” in Slovenia, the wars in Croatia, Bosnia, and Kosovo. The Yugoslav concentration camp on the island of Goli Otok. Mostar: a city at the explosive junction of three cultures. The Battle of Vukovar. The United Nations Protection Force (UNPROFOR), its role in protecting peace and security in the Balkans. Chronology of the disintegration of Yugoslavia.

The first part of this story (in Ukrainian):

Part 2. Ukrainian Peacekeepers in the Balkans