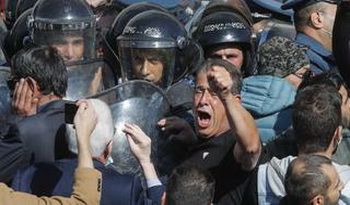 The German newspaper Tagesschau offered readers an article on the consequences for Armenia of signing the agreement on a peaceful settlement of the war in Nagorno-Karabakh.

It points out that the peace agreement partially alleviate the situation for Armenia, but only regarding the front’s situation. While the irritation surrounding Prime Minister Nikol Pashinyan, the problems caused by the large number of refugees, and the coronavirus pandemic have pushed the country to its limits.

Everything that is happening, including the end of the Nagorno-Karabakh war, shows Europe’s inability to use traditional instruments to control the situation in explosive areas or to prevent escalating tensions.

The Russian-led system of collective security in the post-Soviet space shows that it cannot guarantee this security to its partners, or at least does not want to. With bringing its peacekeeping contingent to Nagorno-Karabakh, Russia has somewhat benefited from the a tactical point of view. But from a strategic point of view, that is, geopolitically, it still loses. Like Armenia, which has suffered heavy losses and actually lost the war.