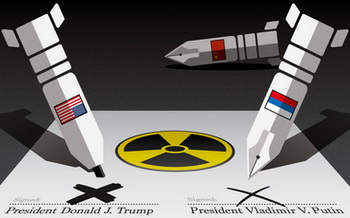 The Treaty on the Prohibition of Nuclear Weapons in the context of the interests of the United States, Russia and China

At the end of the year, a German-language news magazine Focus published a material on global control of strategic nuclear weapons. This refers to the Strategic Arms Reduction Treaty (New START) between Russia and the United States, which expires on February 5, 2021. Negotiations between the leaders of both countries on its continuation are still unsuccessful.

One of the stumbling rocks in the negotiations between Moscow and Washington on this issue was US President D. Trump’s attempt to include China in the text of the Treaty as a country with nuclear weapons which can build it up fairly quickly. If the situation develops in this way, we will find out that for the first time in half a century, there will be no nuclear arms restrictions between the United States and Russia, which together hold 90 % of the world’s nuclear arsenal.

The article reminds that in 2021 a new international agreement on the prohibition of nuclear weapons should also enter into force. The current Treaty on the Prohibition of Nuclear Weapons (TPNW), which has been ratified by the national parliaments of many countries, obliges signatory states not to develop or possess such weapons. However, great nuclear powers are not even thinking about signing this document. Therefore, we can assume that a new year of nuclear uncertainty is approaching, in which complications from a certain intensity of the conflicts to a probable global crisis are possible.

The German publication tries to predict the development of the nuclear crisis in 2021, reminding that the list of possible triggers is alarmingly long. In particular, mistakes and accidents, cyberattacks, reckless demonstrations of force, resumption of nuclear tests in North Korea, escalation of tensions and hostilities between India and China, escalation in the Kashmir conflict between Pakistan and India, further attempts to contain Iran are quite possible. Plus the growing threat of terrorist attacks using “dirty bombs”. In 2020, the world did not see any risks of a global pandemic. The same mistake should not be repeated in 2021 regarding nuclear weapons.