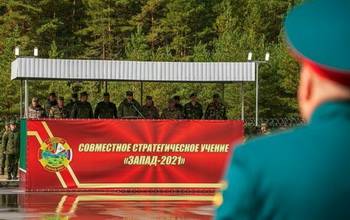 On our website, we have already raised issues related to the strategic command and post exercise (SCPE) of the armed forces of Russia and Belarus “West-2021”. In particular, we spoke about Moscow’s preparations for the exercise and the threats they posed to Ukraine. The topic of the “West-2021” SCPE will be more widely covered in our Journal of Geopolitical Analytics “BINTEL” for the third quarter of 2021. However, I would like to provide a brief assessment of the exercise and make some conclusions and forecasts.

As you know, the main phase of the strategic command and post exercise (SCPE) of the Armed Forces of Russia and Belarus “West-2021” was held in the period from 10 to 16 September 2021 on the territory of the Russian Federation and the Republic of Belarus under the leadership of the Chiefs of General Staff of the two countries.

According to the Russian leadership’s official statement, the plan of the exercise provided for the development of a scenario of aggravation of relations and an armed conflict between two coalitions of conditional states, namely — “Polar Republic” and “Central Federation”. According to the SCPE’s scenario, the “Polar Republic”, with its prepared armed forces, attempted to use force against the “Central Federation”. This situation is escalated into an armed conflict between them.

According to Moscow, the exercise was not directed against any of the countries but was defensive in nature. At the same time, based on the SCPE’s scenario and the peculiarities of the military-political situation in the world (first of all, the actual new Cold War between Moscow and the West), it was quite obvious that the ”Polar Republic” meant Poland, the Baltic states and other NATO members, while “Central Federation” meant Russia, Belarus and their CSTO allies.

Based on the analysis of the practical actions of the participants of the SCPE, the strategic offensive operation involved Russian troops’ breakthrough to the Kaliningrad region of the Russian Federation with further occupation of the Baltic states and part of Poland. According to the exercise’s scenario, the offensive began in the Grodno region of Belarus through the so-called Suwalki Gap, which runs along the border between Poland and Lithuania.

In turn, the main element of the strategic defense operation in the South-Western direction was “repulsing Ukraine’s attempt, with US/NATO support, to regain control of Crimea”. At the same time, the issues of conducting offensive operations against Ukraine, which may have different scales depending on the situation, were worked out.

Strategic command and post exercise was conducted on the basis of troops (forces) of the Western and partially Southern Military Districts of the RF Armed Forces with the participation of units of the Armed Forces of Belarus. In addition, forces and equipment of other services and branches of the Russian Armed Forces were involved in the exercise, including airborne troops, Aerospace Forces (including long-range/strategic aviation), the Black Sea, Baltic and Northern Fleets.

Military contingents from Russia’s CSTO allies: Armenia, Kazakhstan, Tajikistan and Kyrgyzstan, as well as its partners — India, Mongolia, Serbia and Sri Lanka, were invited to participate in the SCPE. The armed forces of China, Vietnam, Myanmar, Pakistan and Uzbekistan were presented by military observers.

In total, 200,000 soldiers and officers, about 80 planes and helicopters and up to 760 pieces of military equipment, including 290 tanks, 240 pieces of barrel and jet artillery and up to 15 warships, were involved in the “West-2021” SCPE. According to the leadership of the Ministry of Defense of the Russian Federation, the number of participants of the SCPE, who took part in its main phase, did not exceed 6.4 thousand people, which corresponds to the OSCE Vienna Document of 2011, which restricts military activity of member countries in Europe. The total number of servicemen from the partner countries of Russia and Belarus was about 500.

As stated by the Russian leadership, based on Moscow’s unilateral commitments to move the training areas away from the borders of NATO member states, the main phase of the “West-2021” was conducted at the Mulino training ground in Nizhny Novgorod region of the Russian Federation and at the Lyada training ground in Tambov region.

However, this was not true and was part of Moscow’s information campaign to cover up the true content of the exercise. For example, nine training grounds in the Western Military District of the RF Armed Forces and four training grounds in Belarus were used for practical trainings of the troops.

The rehearsal of practical actions of naval forces was held in the southern part of the Baltic Sea and the Gulf of Finland.

At the first stage (for three days) the commanders of the armed forces of Russia and Belarus fulfilled the task of deploying the relevant troops (in fact, already created in the spring of 2021), as well as units and forces’ command and control in repulsing an armed aggression against Belarus and countering military invasion of the enemy in the Kaliningrad region of Russia.

At the second stage (for four days) command and control tasks of the coalition of troops of the “Central Federation” during the transition to a counteroffensive to restore the territorial integrity of Belarus and repulse the enemy’s invasion of the Kaliningrad region of Russia were worked out. This was the cover for Moscow’s preparations for the realization of its aggressive intentions towards Poland and the Baltic states.

On the eve of the SCPE and during its conduct, separate units of the 1st Tank and 20th Combined Arms Armies of the Western Military District, as well as the 76th Airborne Assault Division and 106th Airborne Division and the 31st Separate Airborne Assault Brigade of the RF Armed Forces were deployed to Belarus. In addition, tactical aircraft from the 6th Army of the Air Force and Air Defense, as well as strategic bombers from the long-range (strategic) aviation of the Russian Aerospace Forces, operated in the airspace.

Exercises of the Southern Military District, the Black Sea and Northern Fleets and their coastal troops, as well as Russian troops and military bases in the occupied territories of the Donbas and in the annexed Crimea, in Transdniestria, Abkhazia and South Ossetia were conducted against a single operational background with the “West-2021” SCPE. Formally, the mentioned exercises were not directly related to the “West-2021” SCPE, however, in fact, they were its constituent parts within the framework of testing the actions of the RF Armed Forces in other important areas, primarily against Ukraine and Georgia.

Significant is the fact that in the current year the involvement of the troops of the Central Military District of the Russian Armed Forces in the “West-2021” SCPE had a limited scale. This was probably due to the reorientation of Central Military District’s forces to counter the growing threat of Islamic extremism to Russia from Central Asia after the US withdrawal from Afghanistan and the seizure of power in that country by the Taliban.

In general, these circumstances allow us to draw the following conclusions.

The “West-2021” SCPE of the Armed Forces of Russia and Belarus, with the participation of their allies and partners, have become another set of actions by Moscow to demonstrate military force to the United States, NATO and Ukraine. At this, the main goal of the Putin regime was to show its readiness to implement its foreign policy by all possible means, including military ones.

The main element of the exercise was working out the capture of the Baltic states and part of Poland, as well as expanding the scale of the armed aggression against Ukraine, which is a reflection of the Kremlin’s neo-imperial course to revive a new form of the USSR or the Russian Empire.

However, a powerful deterrent for Moscow is the US and NATO’s steps to increase their military activity in Europe, which are no longer inferior to Russia’s corresponding actions in the European theater of operations. A new problem for Russia, which is scattering its efforts, is the consequences of the US decision to withdraw its troops from Afghanistan, which has significantly increased the threat of Islamic extremism’s to Russia from Central Asia.

Against this background, Beijing, which is considered Moscow’s main strategic partner, is in no way really going to side with Russia in its confrontation with the United States and NATO, but pursues solely its own interests. Given the similar positions of other partners of Moscow and even members of the CSTO, Belarus remains the only real ally of Russia. At this, in exchange for support from the Kremlin, the Belarusian leadership, in fact, turned it into Russia’s frontier on the European theatre.

During the preparation and conduct of the “West-2021” SCPE, there was a real threat of Russia’s new armed attack on Ukraine. However, such an attack was never carried out by Moscow for two reasons — strengthening of Ukraine’s defense potential and the actions of the United States and NATO to demonstrate support for our country.

However, this threat persists and will exist. After the completion of the main phase of the “West-2021” SCPE, Russian troops were not withdrawn from the Ukrainian border, but only returned from the training grounds to the places of permanent deployment as part of the armed formations created by Russia in the Ukrainian direction. Moreover, the end of September 2021 saw launching of a new series of exercises of the troops of the Southern Military District of the RF Armed Forces near Ukraine.

At this, Moscow has once again intensified campaign of accusing Ukraine of “resuming aggressive actions” against the “DPR” and “LPR” (in particular, “striking their energy facilities, as the US/NATO did during the 1999 attack on the Federal Republic of Yugoslavia”). As before, Russian propaganda claimed “US and NATO support for such actions by Ukraine”.

The intensification and expansion of military exercises between Russia and the United States/NATO, which are being held simultaneously in the same regions of the European theatre, increases the risk of military clashes between them, including accidental or mutual provocations. Given Ukraine’s geographical location and its being at the intersection of the interests of the West and the East, it will inevitably be drawn into such a conflict as one of the main battlefields.