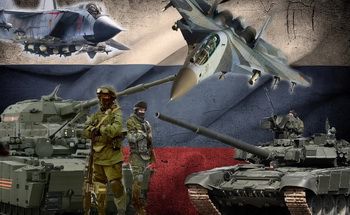 One of the main sources of threats to Ukraine’s security this year was the intensification of Russia’s military activity near Ukraine’s borders during the preparation and conduct of the strategic command and post exercise (SCPE) “West-2021”. Such activity by Moscow was seen in Ukraine as a possibility of Russia’s new attack. As you know, due to the strong pressure from the United States, NATO and the EU on the Russian Federation, it did not dare to take such a step. The completion of the “West-2021” SCPE in no way means a reduction in the level of Russian threats to Ukraine. In the second half of September 2021 Moscow launched another series of military exercises in the Ukrainian direction, accompanied by nuclear blackmailing the United States and NATO. Russia also has stepped up pressure on Ukraine and its Western partners in the political and economic spheres.

In the spring and summer of 2021 we already analyzed Russia’s response to the US/NATO DEFENDER-Europe 21 exercise and the naval maneuvers of Ukraine and its Western partners Sea Breeze-2021. In response to these exercises, Moscow has significantly increased its military activity in the Ukrainian direction and in the Black Sea region, including on the occupied and annexed territories of Ukraine. All this was accompanied by a large-scale information campaign accusing the United States and NATO of pursuing an aggressive policy toward Russia, as well as allegations that Ukraine was preparing an attack on the “DPR” and “LPR”.

A similar reaction was demonstrated by Russia at the SCPE of the Armed Forces of Ukraine Joint Endeavour-2021 (September 22–30, 2021), as well as international maneuvers Rapid Trident-2021 (September 20 – October 1, 2021) with the participation of military units of Ukraine and our state’s partner countries.

For example, on September 20, 2021 battalion and regimental tactical exercises with the participation of troops of the 8th, 49th and 58th Combined Arms Armies were launched at several training grounds of the Southern Military District of the RF Armed Forces in Rostov region, Krasnodar and Stavropol Territories, as well as in the annexed Crimea. The 22nd Army Corps of the Coastal Troops of the Russian Black Sea Fleet, as well as the 7th Airborne Assault Division (Novorossiysk). All in all, about ten such exercises had been held by the end of the month.

In total, about 15,000 servicemen and 900 pieces of armaments and military equipment (including tanks, infantry fighting vehicles, barrel and jet artillery) were involved in the exercises. In the interests of inter-forces interaction, more than 40 aircrafts and helicopters from the 4th Army of the Air Force and Air Defense (operatively subordinated to the Southern Military District) were involved.

In terms of their scale, these exercises actually outnumbered the forces and means of Russia and its allies, which took part in the active phase of the “West-2021” SCPE. In particular, it involved only 6.4 thousand servicemen, 750 pieces of military equipment, 80 aircrafts and up to 15 ships.

Besides, in September of 2021 the military commissariats of the Southern Military District called up about a thousand conscripts to the combat army reserve. Due to them, combat units were replenished and territorial defense units of the 8th Combined Arms Army of the Southern Military District were formed (deployed in Rostov region of the Russian Federation near the Donbas conflict zone and is the second echelon of Russian troops in the occupied territories of Ukraine). In the spring and summer of 2014, detachments of Russian mercenaries were sent in a similar way to Donetsk and Luhansk regions.

Of the operational and combat training measures carried out by the Russian Armed Forces in the Ukrainian-Black Sea direction in September of 2021, the most dangerous for Ukraine were regimental and battalion tactical exercises of the 150th and 20th Motorized Rifle Divisions of the 8th Army of the Southern Military District and the exercise of the 7th Airborne Assault Division in Crimea. Thus, bilateral regimental tactical exercise of the 150th Motorized Rifle Division was conducted at the “Kadamovsky” and “Kuzminsky” training grounds in Rostov region of the Russian Federation with the participation of two reinforced battalion tactical groups. They rehearsed offensive operations in order to support the 1st and 2nd Operational and Tactical Commands (former 1st and 2nd Army Corps) in the “DPR” and “LPR”. T-72B3 tanks, BMP-3 infantry fighting vehicles, multiple rocket launchers and artillery guns were involved in the training battle. A squadron of transport-combat helicopters “Terminator” Mi-8AMTSH was used to make a tactical landing on a strategically advantageous line in the rear of the enemy’s defense.

During the same period, combat readiness was increased and a number of measures of operational and combat training of the 1st and 2nd Operational and Tactical Commands of the RF Armed Forces and mercenary detachments in the “DPR” and “LPR” were carried out. Practical tasks were worked out directly on the front line, which led to an escalation of tensions in the conflict zone. In addition, reserve trainings were announced in the “DPR” and “LPR”.

In turn, as part of the training of the 7th Airborne Assault Division, the scenario of strengthening the 22nd Army Corps of the Black Sea Fleet was worked out during an operation to “repulse the enemy’s actions to capture Crimean peninsula”. Ukraine, which allegedly tried to “regain control of Crimea”, as well as the United States and NATO, which “supported the actions of the Ukrainian Armed Forces”, were openly declared as such adversaries.

According to the training plan, more than 2,000 servicemen and 100 pieces of combat and special equipment from the 108th Airborne Assault Regiment (Novorossiysk) and the 1141st Artillery Regiment (Anapa) were deployed to Crimea, as were a number of other units of the 7th Airborne Assault Division. After the arrival of the mentioned troops at the “Opuk” training ground in Crimea, an episode of the liquidation of the enemy’s bridgehead on the coast of the peninsula, was rehearsed.

They also worked out breaking through the enemy’s defenses, defeating its forces on the second front line and capturing positions in the coastal zone in order to repulse the second wave of enemy landings. The actions of the 7th Airborne Assault Division were supported by tactical aircrafts and helicopters of the 4th Air Force and Air Defense Army, as well as by the naval and aviation forces of the Black Sea Fleet.

Despite the Russian military command’s statement about the “defensive nature” of the training of the 7th Airborne Assault Division, it was purely offensive, which once again confirmed the possibility of its involvement in Russia’s attack on Ukraine from the territory of Crimea.

Already in October of 2021, under the guise of a control inspection of the troops of the Southern Military District of the RF Armed Forces, another series of operational and combat trainings began at training grounds in Rostov region, North Caucasus and the annexed Crimea. In particular, from October 4, 2021, bilateral tactical training of the 810th Separate Marine Brigade from the 22nd Army Corps of the Russian Black Sea Fleet is being held at the “Opuk” training ground in Crimea. Warships, naval aircrafts and helicopters, air defense systems, and engineering units are also involved in the training.

According to the official statement of the Russian military command, conducting an anti-amphibious operation is being worked out. However, the idea of the training includes both defensive and offensive elements.

Against this background, in order to exert military pressure on Ukraine’s Western partners and intimidate and nuclear blackmail them, Russia conducted a series of demonstration exercises on all three components of its strategic nuclear forces.

September 22, 2021 two strategic bombers Tu-160 of the Russian long-range (strategic) aviation performed a demonstration flight in the airspace over the Baltic Sea. The bombers were accompanied by Su-35S fighters from the 6th Air Force and Air Defense Army and Su-27 of the naval aviation of the Baltic Fleet of the Russian Federation.

And on September 27, 2021, in Sverdlovsk region of the Russian Federation, large-scale command and post exercise of the 42nd Missile Division of the 31st Missile Army (HQ — Orenburg) was launched. As part of the exercise, several RS-24 “Yars” mobile ballistic missile systems were deployed to field areas for combat duty.

As in the spring of 2021, the above-mentioned actions of Russia are again accompanied by Moscow’s accusing Ukraine of preparing an attack on the “DPR” and “LPR”. Thus, according to the RF Deputy Foreign Minister A. Rudenko, “Moscow takes into account the rhetoric of the Ukrainian authorities regarding a possible military confrontation and knows about Kyiv’s military preparations with the help of its Western partners”. At this, he did not rule out the possibility of a “military scenario in the development of Russian-Ukrainian relations”, and also pointed out that “the Russian military budget already has a corresponding item of expenditure”.

In addition to demonstrating military force, Russia has stepped up other measures of pressure on Ukraine and its Western partners. In particular, Moscow has provoked a sharp rise in gas prices in Europe, which the Kremlin is using to promote its Nord Stream 2 project. As you know, the new Russian gas pipeline is seen by Russia as a means of energy pressure on Europe and Ukraine. In addition, Russia is deliberately fomenting contradictions in relations between the United States and Europe. One recent manifestation of Moscow’s efforts has been an active information campaign on the problems that have arisen between the United States and France over Australia’s decision not to purchase French submarines and to transfer orders to American manufacturers.

In general, these circumstances show that Moscow continues to pursue an active and aggressive policy aimed at establishing Russian control over Ukraine. At this, the Kremlin is extremely nervous about all the steps taken by Ukraine to strengthen its Armed Forces and develop military cooperation with the United States and NATO, which objectively complicates the implementation of Russian plans. The same applies to the Kremlin’s response to the USA, NATO and the EU’s measures to curb Russian expansion in the Baltic and Black Sea regions and, more generally, in the European direction. The consequence of this is an increase in the level of military threats to Ukraine from Russia, which may launch a new aggression against Ukraine before our country has gained sufficient strength to guarantee a repulse of the Russian attack.