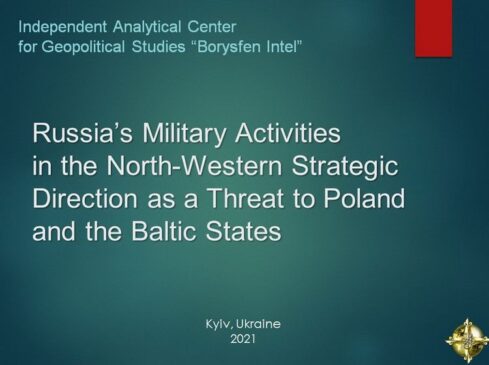 Military Threats to Poland and the Baltic States

The Baltic region is strategically important for the Russian Federation as an exit to North-Western Europe and Northern Atlantic. Besides, despite Poland and the Baltic States’ being members of NATO and the European Union, Russia continues to consider them its “historic” and “lost” territories. That is why, Moscow will never give up its attempts to regain control over the Baltic region.

This is the main reason for Russia’s active hybrid wars against European countries, especially against Poland and the Baltic States. At this, the Russian leadership does not exclude the possibility of a military way of achieving its goals in the Baltic region in case of favorable circumstances. The main of such circumstances would be a spread of unrest in the Baltic countries against the background of NATO’s critical weakening as a result of the intensification of internal problems in the Alliance or its efforts being diverted to other conflict regions.

Russia’s armed aggressions against Georgia (2008) and Ukraine (2014), as well as the deployment of the main attack forces in Western regions of the RF, testify to the Kremlin’s readiness to use military force to realize its external interests. Thus, since 2014, in the North-Western (Baltic), Western (Central-European and Ukrainian) and South-Western (Black Sea) strategic directions Russia has formed the following:

At the same time, in the occupied territories of Ukraine — there are the 1st and 2nd Operational and Tactical Commands (former 1st and 2nd Army Corps of the 8th Combined Arms Army; they were reformed in the spring of 2021, which actually raised their status to the level of combined arms armies) — on the territory of the “DPR” and “LPR” (in total — up to six motorized rifle brigades, two tank brigades/regiments and two artillery brigades), as well as a number of formations and units in the occupied Crimea, including the 126th Separate Brigade of Coastal Defense (Perevalne), an artillery-missile brigade of coastal defense and the 8th Artillery Regiment of Coastal Defense.

Taking into account the above-mentioned, as of today, the Russian troops in Western regions of the RF include:

Today, mastering the above-mentioned tasks is the basis of military exercises of the troops of the Western and Southern Military Districts of the RF Armed Forces. Thus, during the Strategic Command and Post Exercise (SCPE) “Caucasus-2020”, in autumn of 2020, a scenario for simultaneous offensive operation in the South-Western strategic direction and defense operation in the North-Western strategic direction was worked out. At the same time, the task of creating a land corridor from the territory of Russia to the Crimean Peninsula along the northern Black Sea coast was worked on.

Besides, the difference between the official versions of the scenarios of the exercises “West-2021” and “West-2017” became frankly significant. Thus, in 2017, only “an anti-terrorist operation against terrorist groups that invaded the territory of Belarus with the support of neighboring countries” was declared. In 2021, during the “West-2021” exercise, the strategic offensive operation with a breakthrough of Russian troops to the Kaliningrad region of the Russian Federation with further occupation of the Baltic States and part of Poland, was worked out. This showed that Russia is choosing a tougher confrontational policy in its relations with the West and is openly demonstrating its readiness to use military force in order to achieve its foreign policy goals.

However, in reality, the “West-2021” and “West-2017” exercises are virtually identical and had to rehearse the practicing of strategic offensive and defense operations during the armed conflict (war) between Russia and the United States/NATO.

Proceeding from the content of the “West”-type SCPEs, the basis of the main attack forces in the North-Western (Baltic) strategic direction will be the 1st Tank Army and the 20th Combined Arms Army (after their redeployment and concentration in the North-Western region of Russia), 76th Airborne Assault Division (Pskov), 98th (Ivanovo) and 106th (Tula) Airborne Divisions, 45th Separate Special Forces Brigade (Kubinka, Moscow), the units of the 6th Army of the Air Force and the Air Defense of the Russian Aerospace Forces (HQ in St. Petersburg; operationally subordinated to the Western Military District), the forces of the Baltic Fleet, as well as forces and units from other military districts of the RF Armed Forces, including one tank division, four or five motorized rifle brigades, three to four artillery and missile brigades, two or three fighters regiments and two or three bombers regiments. Besides, the aircrafts of the long-range (strategic) aviation of the Russian Aerospace Forces will be used.

The scenario of Russia’s strategic offensive military operation in the North-Western (Baltic) direction, most likely, may include following multiple strikes:

Having established control over Suwalki Gap, the main forces of the 1st Tank Army can be deployed towards South-West to repel the NATO troops’ possible counterattack from the territory of Poland;

The attack will be accompanied by the airborne landings in the main directions of attack, as well as by the amphibious landings of the marines of the Baltic and Northern Fleets on the coast of the Baltic States and Poland.

The actions of the main forces will be supported by the units of the second echelon from the troops of the Central and Eastern Military Districts of the RF Armed Forces.

The main forces will be followed by up to three divisions/brigades of the “Rosgvardia” (one for each of the Baltic States), in order to “sweep” the captured territories, with the support of the units/teams of collaborators from among the Russian and Russian-speaking population.

Further on Russians can conduct raids (operations) by tank and mechanized units in the rear regions of Poland, as well as in the territories of a number of Northern European and Central European countries for the purpose of destruction (or capture) of important military objects (or critical infrastructure) and violating the functioning of the objects of the rear and communications.

These raid operations will be accompanied and supported by subversive actions of airborne, reconnaissance and special task forces.

The organization and conduct of raids (operations) in the rear of NATO countries will be based on the concept of “deep operations”, or to be exact, the concept of the use of “operational maneuvering groups” (“OMG”) of the fronts (armies) developed by the USSR Armed Forces back in the 1980’s mainly on the experience of operations of the Second World War and the new capabilities of mechanized troops.

At this, the Armed Forces of Belarus (five to six motorized rifle brigades and an airborne brigade) will ensure defense of the Western direction from NATO troops’ possible counterattack from the territory of Poland.

At this time, some forces of the 6th Combined Arms Army (HQ in St. Petersburg) of the Western Military District and of the coastal troops of the Northern Fleet (in total, up to 3–4 motorized rifle brigades and a marine brigade) will be blocking NATO’s possible counter-offensives against Russia in the Baltic and Arctic directions (including in the Leningrad region, as well as on the Kolskiy Peninsula, near Murmansk and Arkhangelsk).

In addition, the forces of the Baltic and Northern Fleets of the RF Armed Forces will be blocking the Danish straits and routes of transfer of reserves from the USA through the Northern Atlantic. In turn, long-range (strategic) aviation of the Russian Aerospace Forces will be conducting non-nuclear missile attacks on important objects in the Baltic States, in the Danish straits’ zone and in the rear zone of NATO (including from the Northern direction).

At this, the possibility of Russia’s use of tactical and strategic nuclear weapons is not ruled out. These tasks are being worked out in the course of the “West” and “Caucasus” SCPEs, as well as during exercises of the Russian strategic nuclear forces.

In conclusion, given the strategic importance of the Baltic region for the Russian Federation, Moscow will never give up its attempts to regain control over it. At this, the Russian leadership does not exclude the possibility of a military way of achieving its goals in the Baltic region. This is also confirmed by Russia’s active hybrid operations against the countries of the region. Taking into consideration this, as well as the unpredictability of Russian foreign policy, the threat of Russia’s aggression against the countries of the region is remaining quite real.