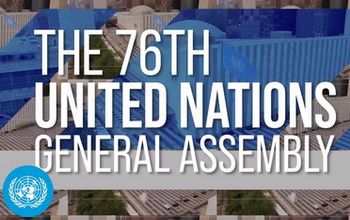 In the summer of 2021, we began the practice of identifying and clarifying the main trends in the situation in the world and individual regions as a result of key international events. I would like to continue this practice based on the results of the 76th session of the UN General Assembly in September 2021. Moreover, US President J. Biden (for the first time in this post) and President of Ukraine V. Zelenskyi took part in its work.

In general, the speeches of the participants of the Assembly confirmed the conclusions made earlier and allowed to identify a number of new aspects concerning the interests of Ukraine.

At the 76th Session of the UN General Assembly, leaders and representatives of leading countries and international organizations, as well as individual countries, including Ukraine, expressed their views on the current international situation and ways to address the most important global and regional issues. Quite significant was the fact of a common vision of the nature of such problems and the need to unite efforts of the world community in their solution. First of all, in this context, was pointed out the need to restore the importance of the UN as an effective international organization. However, as before, in many cases the participants of the Assembly expressed diametrically opposite views on the reasons for threats to global and regional security, as well as ways to overcome them.

Of course, it is impossible to cover all aspects of international issues discussed during the UN General Assembly session in one article. Therefore, we will focus only on most important ones that directly affect the interests of our state.

As last year, the main threats to global security are the consequences of the COVID-19 pandemic and global climate change, which affect the interests of all countries and hinder the development of the world economy.

At the same time, there are still differences between the United States and China over the causes of the pandemic. During the Session of the UN General Assembly, such contradictions were not openly voiced, however, they were reflected in the publications of the American and Chinese media and statements of politicians. Washington continued to blame China for the pandemic, while Beijing categorically rejected such allegations by the United States and said they were aimed solely at undermining China’s position in the US-China confrontation. In turn, most other countries and international organizations urged not to politicize the situation around the pandemic and focus on fighting it.

Quite complicated is also the situation in the fight against global climate change. Despite the world’s leading states’ joining the relevant international agreements, they do not always fully comply with their provisions.

Along with the mentioned threats, the confrontation between the world’s leading states —the United States and Russia with China — is considered a critical problem at the global level. However, these countries again differently assess the reasons for this trend.

For example, according to US President J. Biden in his address at the Assembly, the main reason for this is the attempts of strong countries to dominate the weaker ones, which forces Washington and its allies to oppose it.

For his part, Russian Foreign Minister S. Lavrov accused the West of: trying to exclude from the process of global decision-making those subjects of international law who have a different point of view; imposing its will on other countries and putting pressure on them; withdrawal from agreements in the sphere of the world strategic security; opposing Russia’s legitimate interests, including in the post-Soviet space.

In contrast, Chinese President Xi Jinping refrained from open criticism of the West and focused on countering COVID-19 and ways to restore the world economy and to build a peaceful, open and democratic world. At the same time, a number of Chinese media outlets actually supported Lavrov’s speech.

Despite the emergence of new problems in the world, the situation around Ukraine remains in the spotlight of the world community. In particular, during the 76th Session of the UN General Assembly, the Ukrainian issue was raised in the speeches of the leadership of the UN, the United States, the EU, Canada and many other Western countries, Turkey and Russia.

One of the issues on the agenda of the Assembly was the situation in the temporarily occupied territories of Ukraine. At this, Western countries and international organizations reaffirmed the unanimity of their positions in support of Ukraine and non-recognition of Russia’s annexation of Crimea, as well as condemned Moscow’s policy on the Ukrainian direction. Besides, emphasis was placed on the illegality of the Russian parliamentary elections on the Crimean peninsula and the occupied territories of the Donbas.

In contrast, during the UN General Assembly, the RF Foreign Minister S. Lavrov again tried to deny Russia’s involvement in the events in the Donbas (calling it an “internal conflict in Ukraine”) and accused Ukraine of failing to implement the Minsk Agreements. He expressed Moscow’s sharply negative attitude to the decisions of Western countries not to recognize the Russian elections in Crimea, which was called the application of “double standards” in recognizing the rights of nations to self-determination. Russia actually expressed claims to a new repartition of the world, as it was done by the United States and the Soviet Union at the Yalta Conference in 1945 at the end of World War II.

Maintaining the support of Ukraine by Western countries and international organizations is of positive importance for our country. At the same time, based on the speeches of the participants of the Assembly, there is a certain decrease in attention to it, which is caused by the emergence of new problems and conflicts in the world.

At this, there are changes in US priorities, which plan to intensify efforts to: counter COVID-19; increase aid to countries affected by global climate change; promote of democracy in the world; prevent Iran from developing nuclear weapons and denuclearize North Korea; protect American interests in the Indo-Pacific. One more priority for the United States is to support Israel in its confrontation with the Arab world.

Of course, the United States continues to put pressure on Russia as part of its sanctions policy, does not give up its support for Ukraine and increases military and military-technical cooperation with it, as well as takes active measures to demonstrate military force at the European theatre. However, Washington is trying to avoid overcomplicating relations with Moscow.

In fact, the same positions are held by other Western countries, including Germany and France as members of the “Normandy” group, as well as Poland, Lithuania, Latvia and Estonia as Ukraine’s main partners in Central and Eastern Europe and the Baltics. The same applies to NATO and EU leadership. In fact, during the Assembly, all of them limited themselves to statements in support of Ukraine and negative declarations against Russia, but did not express any intention to increase the pressure on it.

All this allows Moscow to continue an openly aggressive policy towards Ukraine, including the possibility of expanding the scale of the armed aggression against our state. In particular, with the start of the 76th Session of the UN General Assembly, Russia has resumed another series of large-scale military exercises near Ukrainian borders.

Along with global problems, the attention of the world community is drawn to armed conflicts in a number of regions of the world. At this, there is a possibility of expanding their scale, as well as the negative impact on neighboring regions.

In particular, one of the main topics of debates at the UN General Assembly was the situation in Afghanistan after the withdrawal of US troops. In this regard, representatives of the United Nations and Western countries pointed out the negative consequences of the Taliban’s seizure of power in Afghanistan, primarily their mass repression of their opponents and human rights violations. In turn, speeches and appeals by Central Asian leaders expressed concern about the exodus of refugees from Afghanistan and the possibility of spread of Islamic extremists from its territory. In particular, contrary to its previous promises not to expand in the north, the Taliban has already accused Tajikistan of interfering in its internal affairs and has threatened to respond. In light of these circumstances, a number of countries, including US allies and partners, have condemned the withdrawal of US troops from Afghanistan, which was another blow to America’s reputation in the world.

At the same time, the situation in the conflict zones in the Caucasus, the Middle East, North and Central Asia, as well as in the Indo-Pacific region were raised. At this, both the representatives of the warring parties and their foreign partners demonstrated a fundamentally different view of the nature of these conflicts, which confirmed the actual impossibility of their peaceful settlement (as well as the conflict in the Donbas). All these are the factors that distract the world community’s attention from Ukraine.

As a separate aspect of the 76th Session of the UN General Assembly, we may point out the confirmation of the final division of the former Soviet Union into several groups of countries with completely different interests, which makes it impossible to implement Russia’s attempts to restore it in a new form.

For example, President of Ukraine V. Zelenskyi and Prime Minister of Georgia I. Garibashvili, as leaders of the former Soviet republics of European and Euro-Atlantic choice, confirmed the European course of their countries, expressed their intention to continue countering Russia’s armed aggression and to liberate their occupied territories, and demonstrated readiness to fully participate in the efforts of the world community to address global and regional issues. In particular, I. Garibashvili put forward a “Peaceful Neighborhood Initiative” for the Black Sea region.

The Prime Minister of Belarus — Russia’s main ally — V. Makey basically repeated the theses of Lavrov’s speech, and also accused the West of putting pressure on Belarus and trying to change its power by organizing a “colour” revolution. Referring to this, he outlined Belarus’ plans to deepen integration with Russia.

President of Uzbekistan Sh. Mirziyoyev and President of Turkmenistan G. Berdimuhamedov, as leaders of the countries of the former USSR pursuing a neutral policy, focused on supporting international efforts on the above issues, as well as economic development and security in Central Asia. In this regard, they put forward the initiatives to: adopt a special UN resolution to strengthen the interconnectivity of Central and South Asia; hold an international conference on the recovery of the world economy in Tashkent; create a zone of peace, trust and cooperation in the Central Asia and the Caspian region. At the same time, not a word was said about the development of relations with Russia.

A “verbal altercation” between President of Azerbaijan I. Aliyev and Prime Minister of Armenia N. Pashinyan over Nagorno-Karabakh also took place on the sidelines of the UN General Assembly.

Following the 76th Session of the UN General Assembly, a final resolution was adopted, outlining the main international and regional challenges, and calling for a concerted effort by the world community to address them. However, in fact, no specific ways to resolve this problem have been proposed. This once again showed the actual transformation of the UN into a “discussion club” and its loss of its importance as an effective international organization.

That is why Ukraine can only count on the UN as an international platform to discuss issues related to Russia’s armed aggression and its annexation of Crimea and the occupied territories of Ukraine’s Donbas. However, such negotiations are unlikely to have any practical consequences. Nevertheless, Ukraine’s use of various UN platforms for these purposes will allow it to keep the spotlight of world attention on the Ukrainian issue, as well as to systematically demonstrate to the world the negative nature of Moscow’s policy.