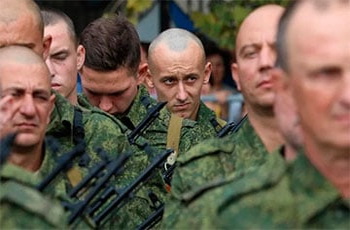 The Russian troops’ retreating from Kherson became another turning point in Russia’s war against Ukraine in our favor. This, of course, is understood by Moscow, which is trying to do at least something to change the situation. As always, this “at least something” resulted only in a new recruitment of soldiers to the Russian army, which is carried out in the forms of open or covert mobilization. At this, most of the mobilized die, get wounded or surrender a few days after arriving at the front. And this is just the “tip of the iceberg’” of Russian problems. The much larger submerged part of that “iceberg” actually poses a mortal threat to the Russian Federation itself.

The situation at the front in Ukraine is becoming more and more paradoxical. For example, since July 2022, Russia has been trying to break through our defense near Bakhmut, Avdiivka and Maryinka in Donetsk region. None of this works for it.

Instead, it works for us. As you know, from the same time, Ukrainian troops liberated the eastern part of Kharkiv region and the western (right-bank) part of Kherson region. And they recaptured more than ten settlements in our Luhansk region.

One and only conclusion can be drawn from this. The problems of the Armed Forces of Russia have acquired a global dimension. And what is happening at the front is becoming a real horror for Russians, which is not even hidden by the Russian mass media.

Everyone knows that conscripts, mobilized to the army are forced to buy military uniforms, ammunition and field rations for their own money. This can still be somehow understood. However, in the military units at the front, where they arrive after two or three days, it is all taken away from them. Instead, they are given uniforms and ammunition taken from the dead or wounded. On the Internet there is an instruction from the times of the Second World War, how this was done on the battlefields at that time.

About the same is going on in the training camps where some of the mobilized are sent. There, non-statutory relations manifest themselves in full force. Fights between different categories of servicemen have long been no news. Russian mass media systematically report on how those who are maimed during such fights are sent home. Many people die there, but this does not spoil the “official statistics” of the Ministry of Defense of the Russian Federation.

However, recently there was an armed incident at a training ground in Belgorod region on the basis of inter-religious conflicts. 12 servicemen called up from the reserve, as well as a personnel officer, died. All of them were killed by a citizen of Tajikistan. A good question arises: how did he end up in the Russian army and also as part of the preparation of its new units for the war against Ukraine?

The Ministry of Defense of Russia has long shifted its responsibility for the provision of mobilized persons to themselves and to local authorities. We have already written how they provide for themselves. The leadership of Russian regions and other territories shows readiness to provide them with all kinds of assistance. However, this is nothing more than self-publicity and a cover for corrupt activities, and even openly criminal activities.

Appropriate funds are allocated to regions and territories from the federal budget. Instead of purchasing or producing quality items for Russian servicemen, all sorts of junk is purchased. In particular, Chinese rubber galoshes with artificial insulation, which are claimed to be “the best Russian-made military boots”. And funds allocated from the state budget… are simply stolen.

The aid sent from the rear of Russia for mobilized persons is also looted. Let us cite just one fact. A consignment of clothes, thermal clothing, shoes and food was sent from the Republic of Komi to the military units in Belgorod region. On the way, what was sent was stolen and replaced with rags, which arrived at the destination.

The activity of the so-called Russian volunteers is a complete fiction. They supposedly collect aid for the military. But the collected aid is mostly “secondhand” that no one needs.

Even bigger problems occur in the units of the private company “Wagner”. As Russian human rights defenders write, regular extrajudicial executions take place there, including the most barbaric methods with the use of a sledgehammer… According to confirmed data alone, more than 40 people were killed, who were accused of desertion or surrender.

Currently, most of “Wagner”’s fighters are ex-prisoners who are actually forcibly recruited into the army from prisons and correctional facilities. To ensure this possibility, appropriate changes were made to the Russian legislation. According to the new version of the law on mobilization, which was adopted by the legislative assembly of the Russian Federation and approved by V. Putin in October 2022, from now on it is allowed to recruit everyone: murderers, robbers and rapists.

An exception is made only for persons convicted of terrorism, participation in hostilities against Russia and all sorts of other anti-Russian, or more precisely, anti-Putin activities. And this is quite clear. If you give them weapons, they will most likely turn them against the Putin regime itself. As a result, the Russian Armed Forces have already turned into a large “penal company”, which mostly includes scum and is a product and reflection of Putin’s power.

But then, even without that, the Putin regime is on the verge of collapse. We already wrote that with five competing “armies” operate in one country, the Russian Armed Forces under no circumstances are able to win. The first two were mentioned above. As you know, the third and fourth of them are Kadyrovites and, separately, other “individual” or national battalions formed in Russian regions.

Everything is clear with Kadyrovites. They mainly perform the functions of anti-retreat units and engage in robberies of the civilian population of Ukraine. Directly at the front, they have no value, because they cannot really fight and only portray themselves as “cool fighters”. We witnessed this back in March 2022, when they were escaping from our territorial defense fighters near Kyiv.

The situation with “individual” or national battalions is somewhat more complicated. Formally, they are part of regular formations and units of the Armed Forces of the Russian Federation — brigades and regiments. But, in reality, they occupy a semi-independent position, act according to some of their own plans and, in fact, are gangster formations, which is openly recognized by the Russian mass media.

Like the Kadyrovites, they are mostly only capable of atrocities against civilians and do not exert any positive for Russia influence on the situation in the war. On the contrary, they complicate it even more with constant quarrels among themselves. Because representatives of different nationalities of the Russian Federation have always hated and continue to hate each other. An example of this was a series of armed conflicts in the North Caucasus in the 1990s, as well as the spread of separatism in a number of Russian regions with a predominant indigenous population, in particular, in Tatarstan.

The fifth “army” is Rosgvardiya. In terms of its number, it is actually equal to the ground forces of the Russian Armed Forces, but it cannot change the situation at the front either. But then, Rosgvardiya is not intended for this. Its main task is to protect the Putin regime. In the occupied territories of Ukraine, it performs the same police functions as in Russia itself. Although it is much more difficult for Rosgvardiya to do it here than at home.

All the might of the Rosgvardiya could not overcome the movement of resistance of Ukrainians either in the north or in the south of our country. That is why the occupiers were forced to retreat from Kyiv, Chernihiv, Sumy, and Kharkiv regions, and now from the right-bank part of Kherson region. The Rosgvardiya cannot neutralize our special forces and partisans in the south of Zaporizhzhia region. As well as in Crimea and in the Russian Federation itself, including in Bryansk, Kursk, Belgorod, Voronezh and Rostov regions.

All these five “armies” are quite different, but they share several common features. No one really trains their personnel or provides effective material and technical support. Not to mention the morale and fighting spirit of all Russian servicemen…

And in conclusion. To date, two-thirds of Russia’s armored vehicles have already been destroyed at the front in Ukraine. Roughly the same happened with Russian tactical and army aviation. In fact, the Black Sea Fleet, which was the “pride” of the Kremlin and the object of its increased attention, especially since 2014 — after the Russian annexation of Crimea, has also been liquidated.

Besides, the mass mobilization of people into the army causes real damage to the Russian economy, which is caused by the need for significant additional costs and a shortage of labor. In order to replenish them, the government of the Russian Federation made decisions regarding the actual introduction of compulsory labor for students.

That is why Russia has moved to massive missile attacks on the critically important infrastructure of Ukraine. It cannot defeat us at the front. Therefore, it is trying to force Ukraine to surrender by terrorist and other barbaric methods. However, this will not help it, because it unites Ukrainians even more in the confrontation with the aggressor.