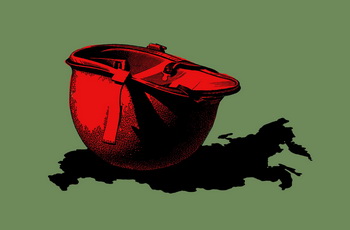 For Russia, 2022 will end in a military dictatorship, because it still rests on the old developments, while the real horrors of this country are still ahead. Many analysts compare the events in the Russian Federation with the last months of the tsarist regime. They do have grounds for it. Therefore, later we will see explosions of public discontent, rolling waves of protest throughout the country, against which the federal vessel will crash.

Ukrainian defenders have already turned the tide of the war in our favor. In most of the directions, they not only stopped the enemy’s offensive, but also went on a counterattack. As you know, after the occupiers were driven from the north of Ukraine and Kharkiv region, our troops have already liberated almost half of the right-bank part of Kherson region and began to liberate the northern part of Luhansk region. However, the importance of the achievements of the Ukrainian troops is much greater. Because they have already changed the world. Namely, they demonstrated how democracy can successfully resist totalitarianism and even defeat it. This is the most important thing.

We have repeatedly written about the geopolitical and other consequences of Russia’s war against Ukraine. I would like to raise this topic again in the context of the Day of Defenders of Ukraine, which was celebrated last week. Especially as the holiday is worth it. Recently, we have had impressive achievements, while Russia has suffered catastrophic losses for itself. Let’s analyze them in more detail.

Currently, the Defense Forces of Ukraine have become one of the strongest armies in modern history. They managed to successfully resist the “second army of the world”, which was considered the Armed Forces of Russia, and defeat that army on the fronts. Some say that Russia is still a “great power”. No more! We have deprived it of that status. After retreating from the north of Ukraine and Kharkiv region, Moscow is already evacuating its “state institutions”, military command points, ammunition depots and hospitals from the front line in Luhansk region and from the right-bank part of Kherson region. Next in line is the south of Zaporizhzhia region.

Of course, the Russian Federation can still significantly harm us. Which it is trying to do by launching missile strikes on the territory of Ukraine. And also — using unmanned aerial vehicles of Iranian production, because it is no longer able to produce its own. The strikes are mainly being inflicted on Ukrainian critical infrastructure, because this is how Moscow is trying to compensate for its defeats at the front.

We are not yet able to repel all of these strikes, but step by step we are changing the situation. At the beginning of a full-scale war, we appealed to our Western partners with a request to close the Ukrainian sky. Unfortunately, at that time this could not be done. Because the United States, together with European countries, tried to prevent an excessive aggravation of relations with Russia, and therefore were in no hurry to provide us with the necessary weapons.

Now this problem has already been removed from the agenda. After Russia’s military defeats, our Western partners no longer fear it. We get almost everything we need. Germany has provided us with modern IRIS-T air defense systems, which even its own army does not possess yet. Spain — with Hawk missile systems, which are somewhat outdated, but no more than the vast majority of missiles that Russia launches against Ukraine. As for the rest, in the near future we will have American NASAMS air defense systems. According to the leadership of Ukraine, our air defense is entering a new era. It is becoming increasingly powerful and consists of many echelons — from the front line to the deep rear.

The processes observed in Russia are absolutely different. Unlike Ukraine, which the war turned into a single nation, the war split Russia. From Putin’s environment, to ordinary Russians. Some of them support the continuation of the war against Ukraine, some are against it. And the latter are becoming more numerous. Especially after the announcement of “partial” mobilization in Russia. According to different sources, from 500 to 700 thousand people who were subject to mobilization have already fled the country.

This is much more than those who could not avoid mobilization. In total, about 90 thousand people were taken to the army out of the planned 300 thousand. Most of them are forced to purchase military uniforms and equipment at their own cost — at those 100 thousand rubles, which the mobilized receive as a support allowance. For this money they even buy 24 hour ration packs from private traders for 900–1200 rubles. Although on the packs one can read: “Not for sale”. But then, who cares?

But that is not the biggest problem for the Russian army. It has long lost its unity, which is the greatest horror for the military sphere of any country.

Let me remind you that the Defense Forces of Ukraine also consist of several components. These are purely the Armed Forces, the National Guard, Territorial Defense and special units of the Ministry of Internal Affairs and the Security Service of Ukraine. They act according to common plans and there are no contradictions between them.

In Russia, as always, everything is different.

There are several armies there and they compete fiercely with each other. The first is the Armed Forces of the Russian Federation. They are currently consist of reservists who have no desire to fight. Formally, the Armed Forces include the so-called national battalions created in the regions of Russia. In fact, they are local armed groups. This is especially true for Chechnya, where such battalions are Kadyrov’s own “army”. At the front, it performs the tasks of anti-retreat units that prevent the Russian military from escaping from the war zone. Because Kadyrov’s units are not capable of anything else.

Another “army” is mercenaries from Prigozhin’s PMC “Wagner”. Since normal people have no desire to serve there, most of the Wagnerians consist of prisoners. They are promised an amnesty in six months and are sent to the front line to the suicide assault squads. However, they do not receive the status of Russian military servicemen.

In addition to the above, Russia still has its Rosgvardia. Those are the former internal troops of the Ministry of Internal Affairs, which in their number and composition are not inferior to the Ground Forces of the RF Armed Forces. It is also “fighting” in Ukraine. But its main task remains to counter anti-government unrest in the Russian Federation itself. Besides, Rosgvardia is used by the Kremlin as a counterweight to the Russian Armed Forces in order to prevent their becoming out of the Kremlin’s control.

That is why there are already clashes between all those “armies” both at the front line and in the rear. In the first case, we are talking about the distribution of property looted in Ukraine, as well as the actions of anti-retreat units to prevent soldiers’ attempts to run away from the war zone. In the second case, — about various kinds of interethnic and interreligious problems in Russia and the Putin regime’s actions to cause confrontation between power structures.

Here are just two examples. According to official reports, on October 15, 2022, two Tajiks shot dead 11 and wounded 15 Russians at a training ground in Belgorod region. According to other data, 22 and 35 people — respectively. And a few days before that — on October 8 — units of the Rosgvardia’s Dzerzhinsky Division were sent to the center of Moscow to block the buildings of the Ministry of Defense and the General Staff of the RF Armed Forces. As it was reported, it was all about removing from office Minister of Defense of Russia Sergei Shoigu and Chief  of the General Staff Valery Gerasimov, who “fought back” by putting military units of the RF Armed Forces near Moscow at high alert. They managed to keep their posts. However, the Armed Forces of Russia and Rosgvardia finally became enemies.

Such a Russian army under no circumstances is able to win.

And finally, a few more conclusions about the situation around Ukraine.

Moscow’s attempts to annex Ukrainian territories further consolidated the entire civilized world around our state. No one recognized the annexation, 143 of the 193 UN member states voted for the adoption of the relevant resolution. The UN General Assembly condemned Russia’s “referendums” and attempts to annex Ukrainian territories. As usual, except for the same rogue states, like Russia itself — Belarus, Syria, North Korea and Nicaragua.

Nuclear blackmail by Moscow not only did not scare the United States and NATO, but, on the contrary, contributed to the complete renewal or the “reset” of the North Atlantic Alliance. In fact, it has strengthened its unity and collective capacity. And NATO leaders have made it clear to Russia that they would resolutely respond to the use of nuclear weapons against Ukraine. This was most clearly demonstrated by the United Kingdom. According to its leadership, London can respond even without consultations with NATO. Moscow was warned about the inadmissibility of a nuclear strike on Ukraine even by its alleged “strategic partner” — China.

Against this background, discontent of the population is growing in Russia: the unsuccessful and meaningless “SMO”; wild in nature “’partial” mobilization and its practical implementation; the slogan “There Are No Losses” amid funerals across the country; the Kremlin’s failure to fulfill the promises regarding the money promised to the mobilized and military; rising prices and shortages of goods, etc. Everything goes to the establishment of a military dictatorship. And the introduction of martial law on almost the entire territory of the Russian Federation is only the beginning. Therefore, Russia is to face public explosions, protests throughout the country. How any dictatorship ends is known to everyone from history. So the real horrors for Russia are still ahead.

And, as has been repeatedly mentioned, Russia’s aggressive war against Ukraine consolidated our society and made it a single nation. And no terrorist strikes by the Russian Federation will change this.

Together we will win.