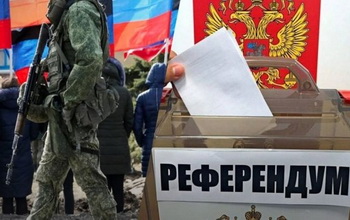 Their Importance for Russia and Consequences for Ukraine

As you know, September 23–27, 2022, in the occupied territories of Ukraine, so-called referendums were held on their entry into Russia. According to Russian propagandists, the “vast majority” of the local population supported the issue. Needless to remind the absence of any legal grounds for those “referendums”, or how the “voting” under the muzzles of Russian machine guns was carried out, or the outright falsification of their results. All this is well known. Let’s better have a look at why Russia held the mentioned “referendums”, how it can use their results and what consequences they will have for Ukraine.

As we have already noted in the previous articles, the so-called referendums in the occupied territories of the former USSR on their “independence” or “accession to Russia” is one of the main elements of Moscow’s neo-imperial policy. With the help of such actions in the post-Soviet countries, separatist pro-Russian state entities are created, which are completely subordinate to Russia.

This allows the Russian Federation to exert pressure on the former Soviet Union republics and maintain Russia’s military presence in their territory in the form of “peacekeeping forces” or military bases in quasi-state entities. Come the need, Russia simply annexes such entities. In the early 1990s, similar mechanisms were used by Russia in Moldova, Georgia and Azerbaijan, in 2014 — in the Donbas and in Crimea, and now — in the “L/DPR” and in the occupied territories of southern Ukraine.

In all such cases, no one except Russia and similar to it rogue states (such as North Korea, Syria and Nicaragua), recognized self-proclaimed republics, or the “legality” of the annexation of Crimea. It is obvious that the same will happen to new “referendums” organized by Moscow in the Donbas and south of Ukraine. Nevertheless, Russia will use them for its purposes to resolve several important issues.

Firstly, Moscow will interpret the results of “referendums” as evidence of “support” of Russia by the population of the Donbas and south of Ukraine. This is already used by the Kremlin as an additional argument for justifying its full-scale aggression against Ukraine within the Russian Federation itself, as well as in the international arena.

Secondly, Russia will declare its ownership over occupied Ukrainian territories. After that, Ukraine’s actions to liberate them will be called by the Kremlin an “attack” on Russia, which will “remove any restrictions” on the methods of warfare (including the use of nuclear weapons).

Thirdly, the Kremlin will receive formal grounds for declaring mobilization in the occupied territories of the south of Ukraine, as it has been done in the “L/DPR” since 2014. In this way, Russia will receive an additional mobilization resource, which will partially compensate for the losses of personnel, increase the number of its troops on the southern front and in some ways reduce the scale of mobilization in its own territory.

Fourthly, on the basis of the very fact of “referendums” and their declared “results” Moscow is building a large-scale information campaign aimed at enhancing the moral spirit of Russian society and masking failures at the front. Today, this issue is of particular importance for the Russian leadership, because of the spread of anti-war moods in the Russian society and dissatisfaction with mobilization.

And finally, the results of the “referendums” declared by Russia can be used to annex the occupied territories of Ukraine. V. Putin is expected to announce this in his speech on September 30. On October 4, 2022, a meeting of the Federation Council of the Russian Federation on the mentioned issue is planned. As it was staged in Crimea and the Donbas in 2014, Russian puppet authorities in the occupied territories of Ukraine have already asked Moscow to “accept these territories as part of the Russian Federation”.

What will all this mean for Ukraine? In fact, nothing new, except that it will finally confirm the impossibility of peace talks with Russia. But then, they have not been conducted since the spring of 2022 after the discovery of Russian troops’ atrocities in Irpin and Bucha. The position of Ukraine remains clear: no peace talks until Russia leaves the occupied territories of Ukraine, or until we have liberated them ourselves. Regarding the themes of future negotiations, they are limited to such issues as the payment of contributions by Russia to Ukraine for damage caused, the return of forcibly transferred to Russia citizens of Ukraine, as well as extradition of war criminals.

At this, the Kremlin’s possible renaming its “special operation” against Ukraine, and threatening to remove any restrictions on the methods of warfare, will mean nothing either. Russia is already waging a full-scale war against Ukraine in all possible ways with the use of all possible means, except nuclear munitions. However, step by step it loses the war, as proven by the situation at the front. At present, Russia’s armed forces are capable only of limited offensive actions in Donetsk region, while Ukrainian troops continue to carry out a successful counter-offensive operation.

We have long been striking on Russian military sites in Crimea, which Moscow calls its territory. It is believed that the same thing happens in Bryansk, Kursk, Belgorod, Voronezh and Rostov regions of the Russian Federation, where Ukrainian partisan and sabotage groups are active. How does Moscow react to this? With vague accusations and regular threats to Ukraine… The same will be in case of Russia’s annexation of occupied territories of Ukraine.

Pointless will also be Russia’s attempts to use the declared “results of the referendums” to justify the attack on Ukraine. This can play a role exclusively in the Russian Federation itself, with its “zombified” population. Although the latter begins to understand what war against Ukraine is about and what consequences it has not only for Russia itself, but also for them.

And finally, I cannot understand what Moscow hopes for planning mobilization in the occupied territories of southern Ukraine? Even people from the pro-Russian population of Crimea and “L/DPR” do not want to go to the war. Russia mobilizes them by force, after which many of them voluntarily become prisoners of war. The population of the south of Ukraine is dominated by pro-Ukrainian moods. Remember how Russian invaders were met in Kherson, Melitopol or Berdiansk in the spring of 2022? Not with flowers, but with protests under yellow-blue flags. Well, Russia will carry out forced mobilization in those cities. Will form some military units. They will immediately come to the side of Ukraine. By the way, with Russian weapons…

At the end of the article, I would like to say that the holding of “referendums” in the occupied territories of Ukraine and their annexation can still have real consequences: tightening sanctions on Russia and increase in the volume of military assistance to Ukraine. And who will be better off after this, and who will be worse?