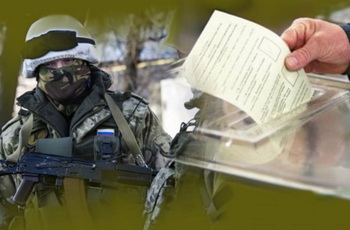 What Moscow Wanted and What It Could Not Achieve

Since the beginning of Russia’s full-scale war against Ukraine, the Kremlin has constantly raised the issue of holding so-called referendums on the occupied territories of our country. The aim of such plans is completely clear and involves creating the impression that Ukrainians allegedly support Moscow’s actions. And also — providing its own legal basis for the annexation of what it seized in Ukraine. The Kremlin somehow hopes that this will prevent us from restoring the territorial integrity of our country. It won’t. We have been launching missile strikes on Russian military facilities in our Crimea, which Russia calls “its own” for a long time. And not Crimea alone. As we have already written, not only the regions of Russia adjacent to Ukraine, but also those beyond them, have turned into a war zone. And all the Russian Armed Forces with its military doctrine on the right to use nuclear weapons could not prevent this. What for are all these referendums now? But then, they still remain an ideological weapon of Moscow and need our attention. Let’s look at this in the context of the modern history of Russian neo-imperialism and the counteroffensive of Ukrainian Armed Forces.

The principle of “divide and rule” has always been at the heart of Russia’s foreign policy. In recent history — since the beginning of the collapse of the USSR — the above-mentioned principle has been used by Moscow to maintain control over the former Soviet republics, and today — over the independent states that were formed in the post-Soviet space.

The main instrument of such actions of Moscow is provoking separatism with its subsequent reinforcement by pseudo-referendums in the occupied territories. In this way, Russia is trying to secure them under the pretext of “manifesting the will” of the local population, as well as “bringing” these territories under the Russian domestic legislation, which allows for the possibility of using nuclear weapons in the event of “violation of the territorial integrity of the Russian Federation”.

For the first time, such a practice was used by Moscow at the end of 1988 in Nagorno-Karabakh in Azerbaijan, where the then leadership of the USSR provoked the Armenian-Azerbaijani conflict. At that time, the Kremlin involved Soviet troops on the side of Armenia, which made it possible to create the so-called Nagorno-Karabakh Republic (NKR). Under the auspices of Moscow and under the protection of its troops, a “referendum” was held in December 1991 on the “independence” of that so-called state entity. In February 2017, another so-called constitutional referendum was held in the “NKR”.

And in the autumn of 2020, Azerbaijan, with the help of Turkey, regained control over most of Nagorno-Karabakh. The main role in this was played by both the high level of training of the Azerbaijani army and the Turkish Bayraktar TB2 UAVs in its arsenal. Russia prevented the complete liquidation of the “NKR” “with the help” of the provocative destruction of its own military helicopter from the 102nd Military Base of the Russian Armed Forces in Armenia on the Armenian-Azerbaijani border.

Then Moscow issued an ultimatum to Baku to stop hostilities in the “NKR”, threatening with a full-scale military attack on Azerbaijan. Russian “peacekeeping forces” were brought to the remnants of the territory of the “NKR”.

In the summer of 2022, Russia was forced to withdraw most of its troops from Armenia and Nagorno-Karabakh and transfer them to the front in Ukraine. Where they were successfully destroyed…

In the same way, in 1989–1992, Russia provoked an armed conflict in the Transdniestrian region of the Republic of Moldova. On the side of the separatists, Russian troops from the 14th Army intervened, which allowed Moscow to create the so-called Transdniestrian Moldavian Republic.

In 2022, Moscow tried to involve the armed formations of the “Transdniestrian Moldavian Republic” in the war against Ukraine. It did not work. Such formations only tried to organize provocations on the border with Ukraine, which were successfully restrained by the Ukrainian Armed Forces. The Kremlin’s plans to mobilize Transdniestrians into the Russian army also failed. There were no fools. Even for the money offered by Russia.

During the mentioned period, Moscow organized armed conflicts in Abkhazia and South Ossetia in Georgia with similar intervention by Soviet and later Russian troops on the side of the separatists. As a result, the so-called Republic of Abkhazia and the Republic of South Ossetia emerged. A “referendum” on “independence” of the former was held in October 1999, and similar “referendums” on the “independence” of the latter were held in 1992 and 2006. In August 2008, after the attack on Georgia, Russia recognized their status as “independent states”, officially established diplomatic relations with them and created its military bases on their territories.

In July 2022, in South Ossetia was scheduled to hold a “referendum” on joining Russia and unification with North Ossetia. However, due to the political crisis in the self-proclaimed republic, it was postponed to September 2022. However, this all means absolutely nothing. The servicemen of the Russian military base in South Ossetia, who are mainly local Ossetians and were sent to the war in Ukraine, have fled the front line en masse and returned home in appropriate spirits.

During the times of the USSR, about 150,000 people lived in South Ossetia. After the first armed conflict in the late 1980s and early 1990s, 50,000 people remained there. And after Russia’s war against Georgia in August 2008 — only 15 thousand. For comparison: up to 200,000 ethnic Ossetians live in Tbilisi alone, including refugees from the self-proclaimed republic. So what, even imaginary, legitimacy can a Russian referendum have in occupied South Ossetia?

As you know, having captured the Ukrainian Crimean Peninsula Russia also held a “referendum” there, which took place in March 2014 under the muzzles of Russian machine guns and with the mass participation of imported “visitors” from the aggressor country. At the “referendum” questions were asked about “reunification of Crimea with Russia with all the rights of the federal subject of the Russian Federation” or “restoration of the 1992 Constitution of the Republic of Crimea and the status of Crimea as part of Ukraine”.

As expected, Moscow reported that “96.77 % of the referendum participants voted for the accession of Crimea to Russia”. However, as Wikipedia reports, on the website of the Council under the President of the Russian Federation for the Development of Civil Society and Human Rights (it is surprising that such an institution exists there, because what civil society and human rights can be in Russia?) for a short time, a completely different information appeared. It was recognized that no more than 30 % of Crimeans participated in the “referendum”, of which only 50 % voted for the annexation of the peninsula by the Russian Federation. Approximately the same data were provided by the Mejlis of the Crimean Tatar people.

That is, the “referendum” in Crimea also had no legitimacy. Nevertheless, in March 2014, President of the Russian Federation V. Putin and a handful of local “leaders” (including a Russian citizen — a representative of the separatist leadership of Sevastopol) signed the so-called agreement on the Crimea ‘s becoming part of Russia. After that, the “agreement” was ratified by the State Duma and the Federation Council of the Russian Federation, and in April 2014, corresponding changes were made to the Russian Constitution.

Well, how did it help the aggressor? Since the end of July 2022, the Armed Forces of Ukraine began to carry out systematic attacks on Russian military bases on the occupied peninsula. The high-precision, long-range and mobile weapons received by Ukraine from our Western and other partners enabled this.

And in August-September of 2022, missile strikes were carried out on all airfields of the 4th Army of the Air Force and Air Defense of the Russian Aerospace Forces and naval aviation of the Black Sea Fleet in Crimea, as well as military camps, air defense positions and warehouses of Russian troops on the peninsula. 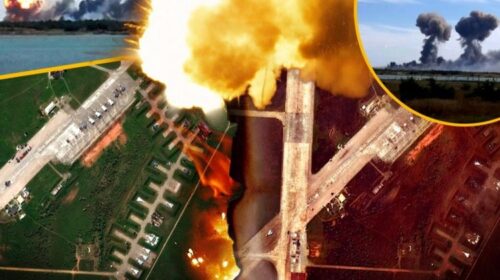 And all the Armed Forces of the Russian Federation, together with their military doctrine, which foresees the possibility of using nuclear weapons, could not prevent this. As a result, Moscow was forced to redeploy most of the warships of the Black Sea Fleet to Novorossiysk, and the aircrafts — to airfields in the North Caucasus.

The next act of Moscow’s attack on Ukraine in 2014 was the provocation of an armed conflict in the Ukrainian Donbas. In April 2014, the so-called DPR/LPR were created in the Russian-occupied territories of Donetsk and Luhansk regions. And in May 2014, “referendums” were held on their status. The question was put to the vote: “Do you support the acts on the state independence of the Donetsk/Luhansk People’s Republics?” According to the statements of the “referendum” organizers, about 75 % of the population took part in the “referendum”; 90 % of them gave a positive answer to the mentioned questions.

By that time, up to 30 % of local residents had already left Donetsk and Luhansk regions, mostly to the territories of Ukraine controlled by Kyiv. Again, what legitimacy could the “referendums” in the “DPR/LPR” have? They did not have it. As in all other cases of the above-mentioned “referendums”, no one recognized them, except for such rogue countries as Russia and North Korea.

They meant nothing. Back in April 2014, Ukraine began an anti-terrorist operation in the Donbas. By mid-August of 2014, two-thirds of the occupied territories were liberated. And only the direct military invasion of Russian troops in the Donbas at the end of August 2014 allowed Moscow to preserve the remnants of the “DPR/LPR”.

In February 2022, V. Putin recognized their “independence” and launched a full-scale war against our state under the pretext of “protecting the DPR and LPR”, “ensuring the security of Russia by preventing the expansion of NATO to the east”, as well as “denazification and demilitarization of Ukraine”.

How did it all end? At the first stage of the war, Moscow really managed to achieve certain successes, namely, to occupy part of the northern, additional eastern and southern territories of Ukraine. “Referendums” regarding their “independence with subsequent incorporation into Russia” were also being prepared there.

The occupiers have already been expelled from the north of Ukraine. Now they are being actively expelled from the Kharkiv region. Such key cities as Balakliya, Kupyansk, Izyum and Kozacha Lopan have already been completely or partially liberated from the occupiers, as a result of which they lost the opportunity to capture the western part of Donetsk region. At the moment, the invaders have also begun to flee Luhansk region. Kherson region and the south of Zaporizhzhia region are next, where counteroffensive operations are also being conducted.

What “organized referendums” can be there now? 90 % of Ukrainians who remained in the territories of Ukraine occupied by Russia since February 2022 categorically refuse to participate in them. Besides, the Armed Forces of Ukraine and Ukrainian partisans are actively destroying both collaborators and Russian “polling stations”.

Does Moscow understand this? It has finally understood, just as it has understood the futility of holding any “referendums” in Ukraine, even if they were completely falsified, as was done before. As a result, they were first postponed, and then actually abolished, replaced by “surveys”.

But then, as experience shows, even if Russia tries to conduct them, they will not have any real consequences. We will definitely restore the territorial integrity of our country, and then we will begin the liberation of the “fraternal Russian people” from the Rashists.