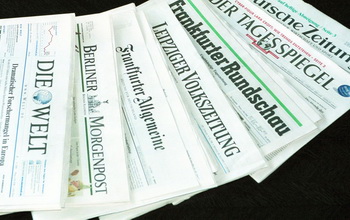 Germany’s elections to the Bundestag are to take place in the autumn of this year, after which the long-term leadership of Chancellor Angela Merkel, who embodied the stability and political reliability of German policy, will end. That is why the political struggle between the German parties is unfolding today, which is complicated by the pandemic, domestic political processes, as well as influences on the geopolitical world stage, including from China and Russia. Which, in turn, is reflected in the media.

Relations between the founders, owners of media holdings, leaders of political forces, top management are quite specific and difficult. This can be confirmed by a brief overview of Germany’s most popular print media, which are also affected by the political situation.

As for the German print media market, national newspapers there are few, but there is a well-developed local press. This is because the German media landscape was formed in the post-war years, when the Western Allies closed all existing media in Nazi Germany and created new media, focusing on the printed publications for occupation zones. Therefore, national newspapers in Germany, as noted above, are relatively few, and others appeared after 1949, i.e. after the termination of the formal occupation status of West Germany and the formation of the FRG.