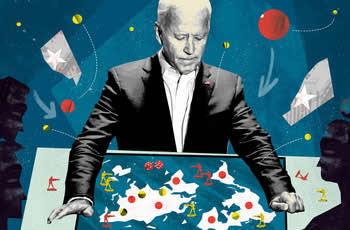 The new US administration, led by J. Biden, began to actively change the country’s foreign policy. This is also relevant for Ukraine, as the support provided by the United States can be called extraordinary, which is confirmed almost daily, and which was discussed in my previous articles.

At the same time, despite the rather obvious nature of J. Biden’s practical foreign policy’s steps, they are assessed ambiguously. And in some cases, I would call some assessments outright insinuations, which are used by certain political forces and even some countries in their interests, against Ukraine — included. What can be called the statements of some Russian and American media about “the readiness of the United States to return Ukraine to the sphere of Russian influence in order to establish American-Russian relations, as a counterweight to the rapprochement of Moscow and Beijing”?..

So, let`s analyze once again J. Biden’s first political steps and other countries’ reaction. This concerns the concretization and official consolidation of the main directions of J. Biden’s election program, as well as a number of resonant events in relations between the United States and China/Russia.

It should be recalled how after his inauguration as President of the United States, in his first foreign policy speech on February 4, 2021 J. Biden outlined the main directions of American policy, and on March 3, 2021 they were specified by US Secretary of State A. Blinken. The Interim National Security Strategic Guidance was published, which became the first official document of the new US administration in this sphere. Based on the principles declared by the new American leadership, the main goal of the United States remains to maintain its dominance in the world, as well as to guarantee its security and economic prosperity. At this, the main challenges and threats to the United States, including in achieving these goals, are:

In general, the views of the new and previous American leaderships on the geopolitical goals, interests and security of the United States are almost the same. However, their actions in these spheres differ greatly. J. Biden’s main approaches assume:

According to this approach, the new US administration not only does not rule out the possibility of constructive cooperation with China in the trade and economic sphere, but is for deeper cooperation between the countries. Because it is aware of the necessity and benefit of such a course, which meets the interests not only of both countries, but also, in general, of the world economy;

In its actions against the Russians, Washington takes into consideration the real situation, namely, their having no effective levers of influence (pressure) on the United States. Today, Moscow’s only such “tool” is its nuclear weapons. However, those weapons could not be used by the Russians, as that would have catastrophic consequences for the Russian Federation;

The new US administration also promises to finance the development of the US Armed Forces in order to maintain their potential at the highest level in the world. At the same time, it demonstrates the readiness to peacefully resolve the problems in the relations between the United States and its opponents and to continue the process of nuclear disarmament.

Since J. Biden took office as President of the United States in January this year, his practical steps fully correspond to the declared directions of the country’s foreign policy. In particular, this is evidenced by the meetings in March 2021 between representatives of the US and Chinese Foreign Ministries and the diplomatic scandal between Washington and Moscow. On the one hand, such events show the readiness of the United States and China, as the two leading centers of power in the world, to improve their relations. On the other hand, they reaffirmed Washington’s attitude to Russia as a secondary country that is not a decisive factor to the United States. And even more, J. Biden, addressing Chinese President Xi Jinping with emphasized respect, in fact demonstrated contempt for V. Putin. In addition, the United States has launched a process of imposing new sanctions on Russia for interfering in the US election.

March 18–19, 2021, at the initiative of Washington, the first meeting of representatives of the United States and China at the level of Foreign Ministers took place. The parties reaffirmed their mutual claims on key issues in their relationship. Nevertheless, they recognized that it is important to resume the strategic dialogue between the United States and China. As a result of the meeting, an agreement was reached to avoid misunderstandings and conflicts, as well as to continue contacts at the highest level. In addition, common positions were declared on a number of issues, including the negative effects of global climate change and the need to join forces to combat it.

Washington has shown a completely different attitude to Russia. March 16, 2021, in connection with the release of US intelligence data on Moscow’s interference in the US elections and the use of chemical weapons against opponents of the Russian government, J. Biden publicly agreed that V. Putin is a “killer,” and said that “he will pay a price”. Although this resulted in a diplomatic crisis in relations between Russia and the United States, J. Biden did not give up his words and intentions.

In line with the new principles of American policy, J. Biden is also taking steps in relations with European allies and partners of the United States. As you know, in February this year,. J. Biden suspended Trump’s decision to reduce American troops in Germany. And in March of this year, against the background of the aggravation of US-Russian relations, the US Congress raised the issue of adopting a bill on the partnership in the sphere of Ukraine’s security (Ukraine Security Partnership Act). Of course, this does not mean that the United States will give Ukraine the Major Non-NATO Ally status, but the bill opens up prospects for this. Especially since the US Congress is considering a number of other steps, in particular, to increase military aid to Ukraine.

Given these circumstances, the reaction of other countries to changes in US policy has become quite significant.

For example, the leadership of China expresses readiness to improve relations with the USA. As Chinese Minister of Foreign Affairs Wang Yi said, “we hope to see no confrontation, no conflict, mutual respect and win-win cooperation with the United States”.

Against this background in March 2021, the Chinese Ministry of Defense rejected the possibility of creating any military alliances against the United States and NATO, including with Russia. According to the Chinese Defense Ministry, Beijing adheres to the principle of non-participation in military blocs and does not seek a confrontation with the United States.

At this, Beijing clearly determines the “red lines” in the dialogue with the United States, which include: interference in China’s internal affairs, pursuing a policy of force and dictatorship in international trade. In this regard, the USA’s position on Hong Kong, the Xinjiang Uyghur Autonomous Region and Taiwan is of key importance to China.

But Russia is reacting negatively to changes in US foreign policy. And this applies both to the toughening of Washington’s policy towards Moscow and the possibility of improving US-China relations, which undermines Russia’s plans to build a strategic partnership with China on an anti-American basis.

However, as noted above, Russia has no real levers of influence either on the United States or on China. Given this, the main methods of its policy to pursue its interests include attempts to militarily blackmail the United States, as well as attempts to provoke aggravation of relations between Washington and Beijing by conducting a special information campaign. Its main directions are the next wave of publications about “the presence in Russia of state-of-the-art weapons capable of destroying the United States”, as well as the statement about the “inevitability of further intensification of the confrontation between the United States and China”. At this, the problems in US-China relations, which arose during Trump’s presidency, are used as evidence of such insinuations.

Besides, according to experts, Russia may take more aggressive actions against American partners in the post-Soviet space, in particular, to provoke an escalation of the armed confrontation in the Donbas and expand the scale of military invasion of Ukraine.

In this case, allies and partners support the United States. Thus, according to Global Britain in a Competitive Age, the Integrated Review of Security, Defence, Development and Foreign Policy, published in March this year, Russia remains the most acute direct threat to the United Kingdom. At the same time, China is defined as the UK’s main “systemic competitor”. Based on this, it is planned to deepen the allied relations of United Kingdom with the United States, to continue cooperation  within NATO and to strengthen the support of partners in Eastern Europe and in the post-Soviet space, first of all — Ukraine.

The analysis of changes in US policy, practical steps and reactions to them by other countries allows us to draw the following conclusions: