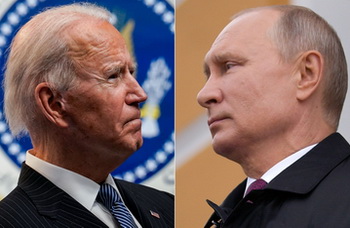 Reasons, Strategic and Current Goals of Russia and the United States and NATO

In my article “America Is Back: Joe Biden’s First Steps and Their Consequences” I assessed the possible impact of the new US President’s policy on the geopolitical situation in the world. And came to the conclusion that there is a high probability of aggravation of relations between the United States and Russia, which will intensify their confrontation in the main areas of intersection of their interests, including in the post-Soviet space.

J. Biden’s first steps in the post of the US President and the reaction of the leadership of the Russian Federation fully confirm such forecasts. This is also confirmed, in particular, by the recent political scandal between the United States and Russia over J. Biden’s undiplomatic statements about V. Putin. In the near future, an even more critical factor in US-Russian relations may be the United States’ imposing new, tougher sanctions on Russia. At present, such sanctions can be imposed on the basis of the comprehensive analysis of Moscow’s aggressive policy, which should be completed in April 2021.

It is known that since the beginning of this year tensions around Ukraine have significantly increased, which is due to Russia’s violation of the ceasefire in the Donbas, as well as its intensified military activity on the Ukrainian direction. This is accompanied by an active political and information campaign accusing Ukraine of preparing for an attack on the “DPR” and “LPR”, which is allegedly supported by its Western partners. At this, Russia is actually threatening Ukraine with its military intervention in the conflict in the Donbas, and at the same time is trying to “bargain” with the United States on the Ukrainian issue, offering cooperation in resolving various issues important for Washington (including arms control, counterterrorism, settlement of armed conflicts in the Middle East, forcing North Korea to suspend its nuclear program, etc.).

In fact, such a policy means that Russia is returning to a fierce confrontation with Ukraine, including in the military sphere, as it had been till 2019. Given the analysis of the situation, the reasons for this are the failure of Russia’s plans to restore its influence in Ukraine after the changes in the Ukrainian leadership, and a number of other factors related to US-Russian relations and also Russia’s internal problems. In view of the above, the main goals of the Russian provocations against Ukraine are as follows:

At the same time, Russia is trying to persuade the world that its policy is peaceful, and denies everything when it is accused of provoking tensions around Ukraine. For example, the intensification of measures of operational and combat training of the Russian Armed Forces in the western part of Russia is explained by its leadership as the inspection of troops and preparation for the strategic command and post exercise “West-2021”.

However, Russia’s steps to prepare the SCPE are fully in line with the preparations for a real war, when active hostilities in the Donbas can indeed resume and the scale of the military invasion of Ukraine can be expanded with the ultimate goal to “finally resolve the Ukrainian issue”.

Our Western partners recognize the threat of Russia’s new attack on Ukraine. In view of this, the United States, NATO and the EU, actively supporting Ukraine, are trying to curb such aggressive intentions. The concrete steps of Western countries and international organizations on this direction are well known and widely covered by the media.

In the current situation around Ukraine, more interesting are strategic and current military-political goals of the United States, NATO and the EU. At this, they are largely related to their own interests and changes in US policy after J. Biden’s coming to power. At the moment, the main of these goals are as follows:

For example, since 2020, the US/NATO “Defender Europe” strategic exercises are taking place on the northern and southern flanks of the European theatre. A characteristic feature of the preparation of this year’s exercise, which is planned in the Mediterranean and Black Sea regions, is support to Ukraine by the demonstration of military force to Russia.

Given the strategic nature of Russia’s and US/NATO’s goals, as well as the firmness and resilience of the parties’ positions, they will continue to implement their plans. At this, the situation around Ukraine may become especially acute in the summer and autumn of this year during the active phase of the “West-2021” SCPE of the Russian Armed Forces and the US/NATO’s Defender Europe-21 exercise. And then, military threats against Ukraine will reach the highest level.

In general, the above-mentioned circumstances allow us to draw the following conclusions:

first, the changes in Russia’s policy to restore military pressure on Ukraine confirm the impossibility of reaching any peaceful and equal agreements with Russia, which relies only on forceful measures and understands only the language of force. All this also applies to the Donbas and Crimea;

second, the new US President, J. Biden, and his administration are moving toward more concrete and tough actions to deter Russia as a major source of military threats to America and the Western world. Under this approach, Washington’s main efforts focus on forcing the Kremlin to change its policy by stepping up sanctions against it while continuing a dialogue with it from the position of strength;

third, J. Biden’s policy toward Russia is supported by the USA’s European allies, who see this as a guarantee of their security from threats from the East. In turn, this strengthens the transatlantic solidarity broken by former US President D. Trump;

fourth, the United States, NATO, and the EU are adamant about their position on Ukraine, which is fundamentally important in defending their interests. Therefore, they will not allow any compromises with Russia over Ukraine. Moreover, one should expect active actions of the leading Western countries to assist in strengthening Ukrainian defense and bringing NATO cooperation with it to a qualitatively new level;

fifth, the escalation of relations between Russia and the West will further increase tensions around Ukraine, including in the military sphere. Under such circumstances, Russia will not stop its pressure on Ukraine in order to demonstrate the possibility of expanding the scale of its armed aggression. For their part, the United States and NATO will step up efforts to deter Russia and defend Ukraine militarily.

However, at this stage, the United States and NATO are unlikely to directly intervene in the armed conflict between Russia and Ukraine until it poses a direct threat to their security. Based on this, the main tool in repulsing Russian aggression will remain the Armed Forces of Ukraine, which requires further increase in their combat capabilities.

At this, the intelligence agencies of Ukraine will continue to be important as a tools of exposing threats to Ukraine and the plans and actions of its adversaries.