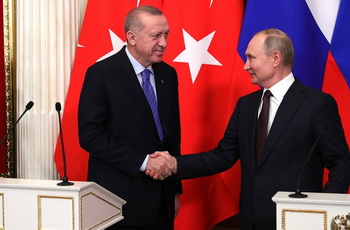 “The Presidency’s Communications Office has launched a new online portal that will announce a daily list of friends and foes of Turkey for the use of pro-government journalists”, read the lead paragraph of a “news story” in Zaytung, a Turkish online humor publication. Zaytung was poking fun at Turkey’s perpetual zigzagging between real and imaginary friends and foes and the difficulty this poses to pro-government media as they struggle to keep up with yearly, monthly, or even weekly changes.

Zaytung is only slightly exaggerating. At the end of 2015, Turkish columnists were busy tearing Russia apart. By mid-2016, they had gone in exactly the opposite direction, expressing exaggerated praise for President Vladimir Putin and his purportedly Turkey-friendly Russia while lacing furiously into the US. They were temporarily thrown when, last November, President Recep Tayyip Erdoğan visited Washington and won much praise from President Donald Trump, but they found a way to make sense out of it: Trump is good but America is evil. Our real friend, the Turkish journalists wrote, is Russia.

In the few weeks leading up to February 23, Turkey lost 16 servicemen in the northern Syrian city of Idlib, the most recent war theater between the Turkish and Syrian militaries, with the latter backed by Russian land and air support. In response, Turkey shelled scores of Syrian targets while Turkey-backed militants downed a Syrian military helicopter. Erdoğan vowed to take military action “everywhere in Syria” if another Turkish soldier was killed — and there has since been another Turkish casualty.

Erdoğan’s February 29 deadline to engage in military conflict unless regime forces withdraw from Idlib does not appear to be having a deterrent effect. In the past weeks, Turkey has dispatched thousands of troops and equipment to the towns in northwest Syria that neighbor Idlib. But an all-out military offensive appears unlikely because

The fall of Idlib was part of a Russian plan to help Syrian President Bashar Assad, Erdoğan’s regional nemesis since 2011, gradually regain control of his war-torn country. Anti-Assad militants, a rich array of jihadist fighters supported by Turkey, are now holed up in parts of Idlib province and moving northward toward Turkey in the hope of joining 3.6 million Syrian immigrants now living there. The end of the Syrian civil war will end Erdoğan’s efforts to topple the Assad regime and replace it with a Sunni government that would function like a satellite state for Turkey. This was and is a losing war for Erdoğan, who misread the Russian gambit in Syria for years.

In July 2012, Erdoğan said: “We have consensus with Russia over Syria”. Thirty-eight months later, Russia’s military intervention in Syria has not taken a form to please the Turks. Also in July 2012, Erdoğan said Russia was positive about a transitional government without Assad. In December 2014, Erdoğan said again: “Generally speaking, we have consensus [with Russia] for a solution [in Syria]”. In July 2015, he said: “Russia’s attitude over Syria is much more positive than before… I believe that [Russia] can give up on Assad”.

In 2015 Erdoğan said he did not understand the Russian interest in Syria. “They don’t even have a common border”. In 2018, Turkey was viewing the US as an ungrateful ally and Moscow as Ankara’s new love affair. That year, Russia joined Turkey in shunning the dollar as the new allies formally opened talks for trade in their local currencies.

In reality, as Erdoğan’s Russia optimism grew exponentially, Russia was augmenting its military presence in Syria in preparation for the eventual Battle of Idlib.

After a three-and-a-half-year marriage of convenience, Turkey and Russia have come to realize that they are fighting on opposite sides of two proxy wars, one in Syria and the other in Libya — after Russia sold Turkey $ 2.5 billion worth of S-400 air defense systems, won a multibillion dollar nuclear plant contract, signed up for a lucrative natural gas pipeline, and widened the gap between NATO and its part-time member Turkey. That is a brief account of Turkey’s tactical hug with the Russian bear.

…several Turkish-Russian contacts, including defense minister-level talks and a telephone conversation between Erdoğan and Putin, had failed to resolve the dispute over Idlib, the last rebel stronghold. All that could be achieved, according to Kremlin, was a commitment that “contacts between military offices will continue in intensive mode”.

The Russophiles in Turkey are now nowhere to be seen. Russia’s ambassador to Turkey, Alexei Yerkhov, says he is facing threats over the Moscow-backed military campaign in Syria. Russian artist Alexander Donskoy unveiled four large paintings in Turkey that were meant to portray Putin as a hero — but the Istanbul authorities quickly removed the art.

Turkey’s badly calculated zigzagging between western and Russian interests since 2015 has sabotaged Turkey’s ties to western institutions and brought it closer to military conflict with Russia. The moment Ankara realized it was threatening to hit not only the Syrian army but the Russian military, it remembered that Turkey belongs to NATO and rushed to request US-made Patriot air defense systems while their own Russian S-400s remain non-operational on Turkish soil.