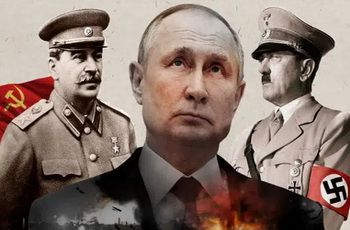 On September 5, 2022, Russian President V. Putin signed a decree that approved the Concept of Humanitarian Policy of the Russian Federation Abroad. The Concept is a new foreign policy doctrine based on the ideology of the “Russian world”, which Russian nationalist ideologists have used repeatedly to justify Russia’s wars, annexation of the territories of independent states, such as in Ukraine, Georgia and Moldova, to “support” the Russian-speaking population abroad. The concept clearly demonstrates what, according to the Kremlin, Russia will do (and has been doing for a long time!) in different corners of the world.

It is symptomatic that the signing of a decree coincides with our analytical material “The Mystery of Bloody MadneZZ”, which analyzes Putin and his environment’s views, which are set out in the Concept of Humanitarian Policy of the Russian Federation Abroad. 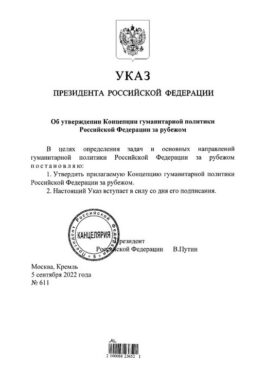 The activity of the Russian Federation is aimed at strengthening cooperation and mutual trust, development of human capital…

Of special relevance are multilateral efforts and actions… to strengthen the systemic foundations of international relations, first of all, those to ensure strict compliance with the UN Charter…

Russia is committed to the principles of equality, justice, non-interference in the internal affairs of other states, it is ready for mutually beneficial cooperation without preliminary conditions, recognizes national and cultural identity…”

When reading these and other general doctrine provisions, there is an unrestrained desire to ask their developers a number of questions. During the full-scale cruel, inhuman military aggression against Ukraine, the whole world sees the proclaimed in the Concept provisions that “Russia is committed to the principles of equality, justice, non-interference in the internal affairs of other states”, that it “promotes its traditional spiritual and moral values” and “strengthens the systemic foundations of international relations and ensures strict compliance with the UN Charter”. But realizing that all these issues are pure rhetoric, let us try and analyze the overall concept of the document and what the developers wanted to say. The main thing, in our opinion, that they sought to convey — from now on it is officially legalized that Russian humanitarian policy abroad is the Kremlin’s weapon. And this weapon is not only ideological, but, along with all types of weapons, it is also a military weapon. For example, as the “soft power tools” (read — weapons!) of the Russian humanitarian policy abroad, the document defines: the Russian language; Russian culture; Russian science and education; Russian sports; Russian youth; /Russian, Russian-speaking/ compatriots living abroad; Russian history; Russian media; Russian religion and church. And from now on you will not say that “sports outside politics”, “culture is outside politics”, etc. All components of cultural and humanitarian spheres have become weapons! 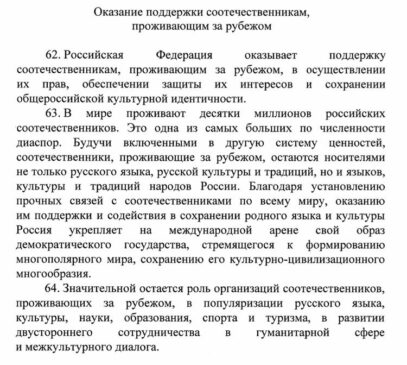 Let us dwell on only one “soft power tool” — Russian compatriots that live outside the Russian Federation.

According to many analysts, experts of Robert Lansing Institute (RLI) included, this concept can be compared to Hitler’s doctrine of Lebensraum, which had become an ideological principle of Nazism and served as a “justification” for Germany’s seizure of territories on the eve and during the Second World War. There are many borrowings and parallels in the documents.

For one, the “grounds” for invasion of Ukraine is identical to what Hitler said, attacking Poland. Namely: “This is the protection of our borders, the security of the Reich and of the depressed German minority in Poland. Danzig has always been a German city, Germany has the right to restore sovereignty over German territories. The liberal world is lying, we strive for peace, we patiently suggested restraining the growth of weapons. But Poland would break peace talks and conduct mobilization. We do not fight the population, our aviation attacks only military targets. Anyone who uses bombs or chemical weapons will receive a devastating answer. We are ready to fight all”. 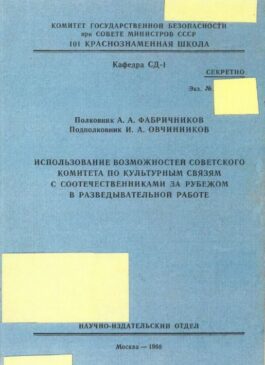 But the Kremlin went further and supplemented the Hitler doctrine with the provisions of the textbook “Using the Soviet Committee on Cultural Relations with Compatriots Abroad in Intelligence Activity”. The textbook was written back in 1968 at the Red Banner School of the KGB of the USSR (later the Higher Intelligence School, the Andropov Red Banner Institute of the KGB of the USSR, and today — the Academy of Foreign Intelligence of the Russian Federation. More than one generation of Soviet KGB-agents have been taught on the provisions from this textbook, including the current leaders of the Russian Federation.

The textbook states that the main operational task of working with compatriots is to prepare a recruit and intelligence base with the involvement of Soviet emigrants, emphasizes the importance of attracting the older generation, whose children are part of modern Western society and have different professions — from a lawyer to an entrepreneur.

The use of Nazi doctrine and KGB textbooks in the Concept of Humanitarian Policy of the Russian Federation Abroad testifies that the Kremlin is not going to adapt to modern world realities and tries to change the conditions to continue to use its usual tools and tactics. The reasons for this are on the surface — the key persons who make decisions in Russia, retained the views and mentality of the Cold War and modus operandi, typical of those years.

Lately, the Kremlin has been using “Russian compatriots” not so much for intelligence, as for subversive activities in the Western countries. In many countries of the world, Moscow creates various organizations through which Russian special services operate “legally” and promote the so-called “Russian world”. For example, the Federal Agency “Rossotrudnichestvo” (which is already under the West’s sanctions) has been promoting the ideology of the “Russian world” in 80 countries of the world, covering themselves with cultural and humanitarian missions. Or the Russkiy Mir (Russian World) Foundation, created by President of Russia V. Putin (Decree No. 796 of 21.06.2007) with the aim “to promote the Russian language, which is a national property of Russia and an important element of Russian and world culture, as well as to support programs for studying the Russian language abroad”. 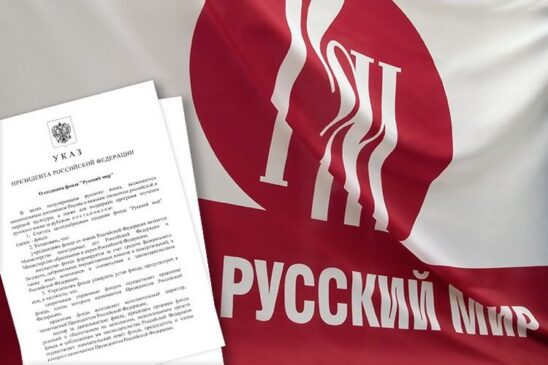 In the Executive Board and the Board of Trustees, there are persons who have been engaged in active anti-Ukrainian activities for a long time: V. Nikonov (Chairman of the Board), V. Medinsky (Minister of Education, now — an Aide to the President of the Russian Federation, Chairman of the Board of the Russian Military History Society), Metropolitan Hilarion (G. Alferov, a member of the Board of Trustees of the Russkiy Mir Foundation, Head of the Department of External Church Relations of the Moscow Patriarchate, Vicar of Patriarch of Moscow and All Russia Kirill, now Metropolitan of Budapest and Hungary), N. Narochnitskaya, (president of the Historical Perspective Fund, head of the Institute of Democracy and Cooperation, Paris), S. Lavrov (Minister of Foreign Affairs of the Russian Federation).

The organizational structure of the Russkiy Mir Foundation testifies to its global character. System-forming are the so-called “Russian centers” (up to 4–8 organizations in 49 countries, that is, almost a third of the UN member states); “Cabinets” (up to 5–8 organizations in 60 countries); “Organizations” (from 2 to 170 in almost all countries of the world).

The destructive activity of the “Russian world” in Ukraine was thoroughly studied by Ukrainian experts (see the works of the Institute of History of the National Academy of Sciences of Ukraine: Larysa Yakubova, “Russian World in Ukraine: at the Edge of the Abyss”, 2018; Valerii Smolii, Larysa Yakubova, “Crimea and the Donbas: Problems and Prospects for Integration into Ukrainian Modern Projects”, 2019; the Kuras Institute of Political and Ethnic Studies of the National Academy of Sciences of Ukraine: “Interpretation of the Russian-Ukrainian Conflict in Western Scientific and Expert-Analytical Works”, 2020).

In the context of the latter, symptomatic is the American, British, Polish and German analysts’ attitude to Ukraine in these matters against the background of insufficient awareness and some bias with many experts from France, Italy and Greece. It should be noted that in those countries the “Russian world” is substantially represented: in France (89 structures, not taking into account the Holy Trinity Cathedral and the Russian Orthodox Spiritual and Cultural Center in Paris), in Italy (84 structures), in Greece (49 structures, not to mention the opportunities of the Imperial Orthodox Palestine Society).

The largest in absolute numbers foreign Russian community outside the Russian Federation is in the United States and has about 3.1 million people. The next largest Russian diasporas live in Germany — about 1.2 million and Israel — about 1 million people. Significant Russian communities are in Canada, Australia, Argentina, Brazil, Mexico, the United Kingdom, New Zealand, Uruguay, where each has about several hundred thousand Russians who identify themselves as being at least of partial Russian origin. On the task of the concept “it is necessary to actively use the potential of a numerous Russian diaspora”! 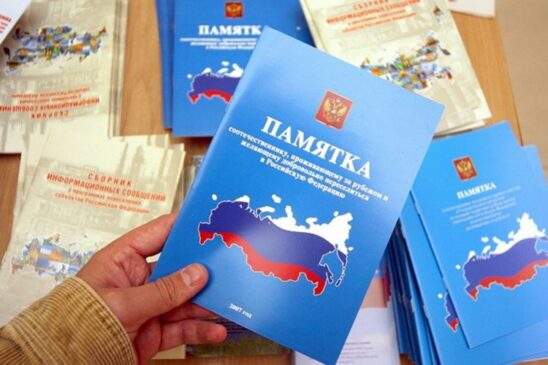 In general, the Concept of Humanitarian Policy of the Russian Federation Abroad officially enshrines the tasks in the cultural and humanitarian spheres that are inherent in the “hybrid war” that the Kremlin enjoys. This is equated with the ideology of the “Russian world”, created, first of all, as a political and ideological weapon, not theoretical doctrine. Their main goal is to destroy the sovereignty and statehood of the countries where the Russian-speaking live. And with a new concept, in fact, every Russian-speaking person can become a weapon in the Kremlin’s hands. This applies not only to the post-Soviet countries, but also to almost all countries of the West where at least one Russian-speaking person lives. There you can always wait for “polite green people”…

So, as the famous Czech writer pointed out in his book, the title of which is even more relevant in the current world geopolitical situation — “Humans! Be vigilant!” (the last words of the book “Notes from the Gallows ” by Julius Fučík).

In the materials that follow, we will analyze the Concept of Humanitarian Policy of the Russian Federation Abroad in more detail, focusing on those features of activity that can be the subject to consideration of the future international criminal court over Putin and his associates.