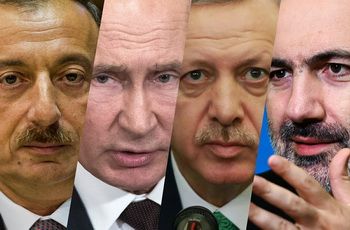 Since 1994, Russia, the United States and France, members of the OSCE Minsk Group, had been trying to resolve the conflict between Azerbaijan and Armenia in Nagorno-Karabakh. All of them kept expressing “great concern”, and Moscow, against the background of the peace process, had been arming Armenia, which made it possible to turn Nagorno-Karabakh into a Russian outpost on the border with Azerbaijan.

President of Azerbaijan Ilham Aliyev, enlisting the support of Turkey, decided to radically change the situation, and after 43 days of continuous fierce fighting, the Armenian armed forces could no longer resist.

Diplomatic methods did not work, which shows the helplessness of the Council of Europe, the OSCE, the PACE and all other “players in politics”. After all, they are not able to use traditional tools to control the situation in explosive areas or prevent escalation of tensions there.

The system of collective security that was created throughout the post-Soviet space under Moscow’s leadership, today does not guarantee this security at all to Russia’s close allies and partners, or, given the events in Nagorno-Karabakh, Russia is in no hurry to do so.

The deployment of the Russian peacekeeping contingent in Nagorno-Karabakh is presented by the Russian media as “Moscow’s strategic victory”, although in reality it can be seen as a tactical move with rather illusory prospects. We can already predict that Russian peacekeepers will not stay there for long. In a year or two, Turkey will start stating that there is no need for them, and Russia will have no choice but to withdraw its forces. And even more so, the presence of Russian peacekeepers may cause an increase in anti-Russian sentiment in Azerbaijan, as they “did not allow to recapture all of Karabakh”.

Today, Moscow no longer has allies who would be willing to die for its interests. Russia, like Armenia, which suffered heavy losses, actually lost the war. This is an indisputable fact.

Nagorno-Karabakh war has had a “cumulative effect” in Central Asia and the Middle East. Thus, this victory of Azerbaijan and Turkey finally and forever destroyed the balance of power in the Caucasus and Central Asia. Turkey’s military presence in Azerbaijan and the probable deployment of Turkish military bases in other Turkic-speaking countries in the region will allow it to implement its far-reaching plans, including:

Consider the camp of the vanquished. Everything is clear with Armenia now. The capitulation has been  signed and major changes await Yerevan.

With the start of hostilities in Nagorno-Karabakh, Iran, as I mentioned in October this year, repeatedly emphasized its neutrality, but still leaned towards Armenia. This was a rather big mistake of Tehran. It probably did not foresee that the war would end so quickly. The second mistake was the de facto disregard for the interests of the Azerbaijani diaspora in Iran and its rapid consolidation with the Turkish-Azerbaijani alliance, which led to Tehran’s losing virtually all leverage to influence the situation in Nagorno-Karabakh.

It is clear that now Iran will be forced to change its foreign policy and establish trusting relations with both Azerbaijan and Turkey. Because trust is worth a lot, and Iran has partially lost it.

Iran will have to reconsider its relations with Russia, as the declared and widely publicized “Russian-Persian military alliance”, which was mainly based on the supply of Russian weapons, is still far from its goal, and is unlikely to achieve it.

Tehran, with the election of Joe Biden as the US President, will certainly return to the process of negotiations with the United States, and not only about its nuclear program. And close relations with toxic Moscow, which is so far losing everything, are becoming unbeneficial for Iran.

The theme of Persian-American relations will be in full swing after January 20, 2021, right now it is premature, we will return to it later. But it should be borne in mind that Tehran in many cases maneuvered quite skillfully between the European Union and the United States, winning diplomatic wars.

Thus, Turkey has significantly strengthened its position in the region, may be for a long time, if not for forever. In turn, despite its increased military presence in the Caucasus, Russia faces growing challenges every time. The Kremlin’s “gas in exchange for allegiance” policy no longer works. Moscow’s slogan “we do not abandon our allies” is compromised. Turkey is becoming a factor of stability and development. Today it has a strong state tradition, it can be the force that will influence the situation in the Caucasus, Central Asia and the Middle East. At this, it should be understood that in the case of Central Asia, it is in conflict with China, and in the case of the Middle East, with Iran, which also claim the role of regional leaders.

Finally, the experience of the Nagorno-Karabakh war is an example of how to deal with frozen conflicts using armed forces. Turkey has proved that its alliance with Azerbaijan is effective and it can be relied on in a difficult situation.