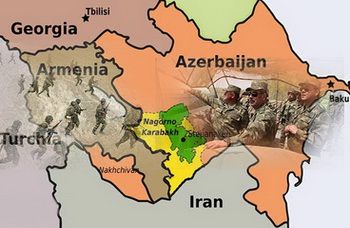 Official Tehran, a proponent of “traditional Eastern diplomacy,” says the Nagorno-Karabakh war is the result of a conflict of interests between former Soviet countries over a “separate region within Azerbaijan ruled by ethnic Armenians”.

I do not consider it necessary to comment on events and the course of hostilities. In my opinion, it is more interesting to analyze Iran’s position, as it borders on and is a friend of all parties to the conflict: Azerbaijan, Armenia and Nagorno-Karabakh. Currently, Tehran is facing a difficult choice, as both Azerbaijanis and Armenians live within the Islamic Republic of Iran, there are many of them, and they all play a very important role there.

Today we must take into account that Azerbaijan, together with Turkey and with its support, is writing a new geopolitical history of the South Caucasus, where a new regional power is being formed before our eyes: Azerbaijan-Turkey. Today, they are forming a new system of regional security without Moscow’s participation.

At this, Russia is trying to turn the long-running conflict between Armenia and Azerbaijan into a war between Muslims and Christians, and by involving Georgia in it, to disrupt the October 31 elections and thus to fan the regional fire.

As for official Tehran, it is neutral. But Iran is not interested in growing influence of Azerbaijan, as it is becoming Turkey’s closest ally, and such an alliance upsets the balance of forces in the region. In conditions of geopolitical chaos in the region, stability and control are needed. And Iran is ready to take on this role.