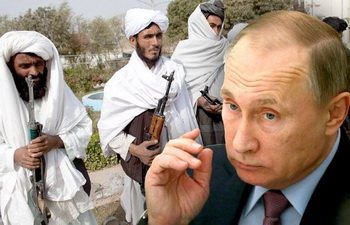 Our previous article, “US Troops Leave Afghanistan. Consequences for Russia and Ukraine”, analyzed possible consequences of the USA’s withdrawal of its troops from Afghanistan. Key findings included predictions of a high probability: the Taliban’s moving to active military actions to seize power in Afghanistan; increasing flows of extremism to Central Asia and Russia; distraction of Moscow’s efforts to counter Islamists.

As shown by the developments in and around Afghanistan, today all this is already happening in reality. Despite Afghanistan’s and Central Asia’s remoteness from Ukraine, the events in that region have a direct impact on the interests of our country. On the one hand, they do distract Russia from Ukraine, but on the other, they are used by Moscow as another pretext for building relations with the West on the basis of fighting terrorism.

As expected, agreements between the United States and the Taliban on withdrawing US troops from Afghanistan in exchange for peace in the country have not been implemented by the Taliban. Immediately after the most of US military left Afghanistan, the Taliban launched an active military operation to seize power on Afghan territory. And in a month took control of the whole country. Currently, the leaders of the Taliban are determining the form of their power in the country.

According to the Taliban leaders, they have no plans to expand militarily into Central Asia. At the same time, the Taliban declare its intentions to counter the terrorist organization Islamic State and fight drug smuggling.

However, according to most experts, such statements and declarations of the Taliban are untrue and are aimed only at improving its image in the eyes of the world community. At this, the leadership of the Taliban hopes for international recognition after the seizure of power in Afghanistan. These conclusions are based on previous experience of the Taliban’s staying in power, as well as the current situation in Afghanistan.

As mentioned in our previous article on Afghanistan, in the late 1990s, the Taliban effectively gained control of the Gorno-Badakhshan Autonomous Region of Tajikistan and maintained close ties with Islamist organizations in Uzbekistan, Kyrgyzstan and Turkmenistan, and even in Russia. Today, the armed groups of these organizations, in particular the Islamic Movement of Uzbekistan, are cooperating with the Taliban in Afghanistan.

Besides, there are units of about 20 other extremist organizations on Afghan territory, including al-Qaeda, Jabhat al-Nusra and the Islamic State, which are also allies of the Taliban. At this, their number is constantly replenished by militants from Syria and other countries. If the Taliban wins in Afghanistan, the country will inevitably become a springboard for the actions of these organizations against neighboring Central Asian countries, and through them — against Russia as well. Along with this, Afghanistan will become a powerful source of spread of the Islamist ideology.

And that’s not all. A mass movement of refugees fleeing the Taliban has already begun in Central Asia. Apart from the civilian population and the current Afghan government`s officials, northern regions captured by the Taliban are being left by the military of the Afghanistan army who were cut off from their main forces and who are now heading to Tajikistan, Uzbekistan and Turkmenistan.

Of course, the events in Afghanistan are of great concern to Central Asia and Russia, which have launched a series of measures to counter these threats. For example, in Tajikistan, Uzbekistan and Turkmenistan, the combat readiness of the armed forces and other security forces has been increased, as well as the protection of the borders with Afghanistan has been strengthened.

In Tajikistan, which is in the most difficult situation, 20,000 reservists have been mobilized. Thanks to them, additional military units were formed, which are sent to the border areas of the country.

Taking into consideration that these forces are not enough to ensure Tajikistan’s security from threats from Afghanistan and to counter the possible intensification of activity of internal Islamist groups, in July of 2021, the official Dushanbe asked for help the Collective Security Treaty Organization (CSTO), but in fact — Russia. As expected, Moscow immediately agreed to provide “assistance” due to its special interests in Tajikistan. In particular, those interests of Russia include:

Given the above circumstances, Russia deploys in Tajikistan the most powerful group of its troops in other countries (except for the occupied Crimea). The basis of such a group is the 201st military base of the RF Armed Forces.

It is on this base that Russia relies in the realization of its interests in Tajikistan and, in Central Asia in general. And again, this is being done under the “cover” of the CSTO forces. In particular, a meeting of CSTO defense ministers was held in Dushanbe in April of 2021 to discuss the situation in Afghanistan and find the ways to respond to the flows of terrorism from that country. In July of 2021, the Chief of the CSTO Joint Staff, Russian General A. Sidorov visited Tajikistan, where he inspected the most problematic sections of the Tajik-Afghan border. As a result of the inspection, a plan was developed to reduce tensions at the border, as well as joint actions to provide assistance to Tajikistan by CSTO forces.

And in August of 2021 in Tajikistan and Uzbekistan there was a joint exercise with the participation of units of the Russian, Tajik and Uzbek armies. It is significant that Uzbekistan is not a member of the CSTO, but took part in the exercise because it faced the same threats from Afghanistan as Tajikistan.

In total, 2,500 servicemen were involved in the exercise, as well as 500 pieces of military equipment (previously it was planned to involve 1,500 servicemen, but due to the events in Afghanistan, the number of participants was increased). Units of the 201st military base, as well as the 15th Motorized Rifle Peacekeeping Brigade (Samara) and special forces from the Central Military District of the Russian Armed Forces were sent from Russia to the exercise.

During the exercise, counteracting external threats to the countries of Central Asia was rehearsed. The main of the tasks were:

The main episodes of the exercise took place near the border with Afghanistan at the ground ranges “Harb-Maidon” in Tajikistan and “Termez” in Uzbekistan. One such episode was a missile and bomb attack on a conventional concentration of enemy troops on the Tajik-Afghan border involving Su-25 attack aircrafts and Mi-24 attack helicopters.

At this, the world’s leading nations and countries bordering Afghanistan are working to resolve the Afghanistan problem through political and diplomatic means. Thus, despite US air support for Afghanistan’s government forces, US officials continue talks with Taliban leaders on fulfilling the terms of the peace agreement (reached in February 2020 and providing for the withdrawal of US troops from Afghanistan in exchange for the Taliban’s refusal to capture power in the country).

According to a number of media (including the Afghan ones), Russia and Turkmenistan are also conducting covert talks with the Taliban. Even before the overthrow of the Taliban in 2001, Turkmenistan was virtually the only country that maintained relations with it. In particular, the parties agreed on mutual non-aggression and carried out cross-border trade.

Besides, in July of 2021, the situation in Afghanistan and around it was discussed at the UN Security Council. Systematic talks on Afghanistan are also being held in the format of the United States, Russia, China and Pakistan.

However, all these measures have so far had little effect on developments in Afghanistan.

It is also worth recalling Russia’s using the Afghanistan problem for its own military and political purposes. In particular, the aggravation of the situation in Afghanistan allows Russia to strengthen its position and military presence in Central Asia under the pretext of protecting them from Islamic extremists. Besides, within the framework of international negotiations on Afghanistan, Russia is trying to establish relations with the West (primarily the United States) and strengthen relations with China and other countries on the basis of joint fighting international terrorism.

It is quite obvious that the ultimate goal of such actions by Moscow is to change the West’s attitude to it, including lifting of sanctions and agreeing to return the entire post-Soviet space (as well as Ukraine) to the sphere of Russian influence.

However, apart from some realization of Russia’s interests in Central Asia, the events in Afghanistan only create new problems for it. Thus, the threat of Islamic extremism from Afghanistan is forcing Moscow to spend extra money on expanding military preparations in Central Asia, increasing military aid to Russian allies in the region, and strengthening Central Military District.

For example, in 2021 the exercises of the troops of the Central Military District of the RF Armed Forces are much more active than in previous years and, in fact, resemble the “Center” type SCPE’s. At this, some Russian units are systematically deployed to Tajikistan, Kyrgyzstan and Kazakhstan to conduct joint exercises. This probably explains the fact that during the deployment of the Armed Forces of the Russian Federation at the North-Western and South-Western directions (including around Ukraine) in the spring of 2021, the troops of the Central Military District were practically not involved in strengthening them and creating a second echelon as before.

By the way, in 2020 the main stage of the “Caucasus-2020” SCPE was held not near Ukraine (except for Crimea), as expected, but in Astrakhan region, which is on the main path of penetration of Islamic extremists to the Volga region and the North Caucasus.

All this disperses Russia’s forces and complicates its ability to confront the United States/NATO and Ukraine. However, this in no way allows us to relax. After the intensification of Russian military activity around Ukraine in the spring of 2021, on August 9, 2021, Moscow launched large-scale military exercises in Astrakhan and Rostov regions, in the Stavropol Territory, Dagestan, North Ossetia and Chechnya, which will last until September 15. Interestingly, they are directed not only against Ukraine, but also against Islamists, which is another evidence of the dispersion of Moscow’s efforts.