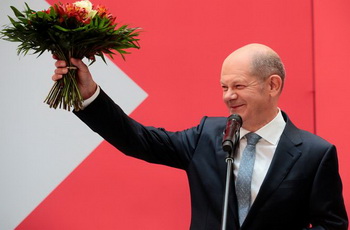 The stages of Olaf Scholz’s political path — in illustrations

The results of the elections to the Bundestag turned out to be what analysts and sociologists predicted. German Chancellor Angela Merkel’s ally, her nominee from the current ruling CDU/CSU coalition, Armin Laschet, failed to win the election. Here, a certain role was traditionally played by some scandals and negative moments from his biography, which were used by competitors. But the main reason for the ruling coalition’s loss, analysts say, is that the Germans are tired of Angela Merkel personally and of the policy for which she was responsible for 16 years as Chancellor. Germany wants some change, even if it was not clearly announced and associated with a specific leader.

The Social Democratic Party of Germany (SPD), led by Olaf Scholz, won the election by a small margin. It won 25.7% of the vote. Such an advantage over the CDU/CSU coalition, which took second place in the parliamentary race and received 24.1% of the vote, is not enough to form a federal government on its own. Therefore, there is again a need for lengthy political negotiations with other most successful parties that may enter the coalition in the German Parliament.

Interestingly, the third place (14.8% of the vote) went to the Green Party, led by Annalena Baerbock, who also nominated her candidacy for the post of Federal Chancellor of Germany. The Left Party is running for the Bundestag, gaining 5% due to German election law, which requires each voter to have two votes. Thanks to the direct winners in the country’s three constituencies, as stated in the election law, the Left Party, entering the Parliament, will create a separate faction. Four more political parties also entered the Bundestag. It is obvious that all these parties will consult on the formation of the coalition, the composition of the federal government and the candidacy for the post of Federal Chancellor. Negotiations, according to German law, can last thirty days from the day of the election, so on October 26 2021 the Parliament will start working.

Here are some features of the political portrait of the leader of the winning party, the Social Democratic Party of Germany, which can be read in the popular German newspaper Süddeutsche Zeitung. It states that, from a political point of view, Olaf Scholz has always sought his place between Berlin and Hamburg, so now his joy is greater than just a successful return to power. He made the SPD the most powerful party in Germany in terms of the number of votes received.

The stages of Olaf Scholz’s gradual election process — in illustrations.