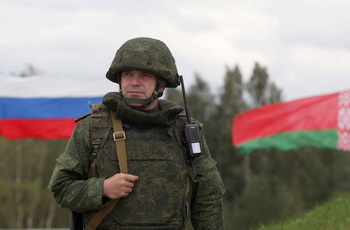 Will Minsk Become an Ally of Moscow in the Latter’s Confrontation with Ukraine?

In the summer of 2021, Ukraine faced a new problem, namely, the openly anti-Ukrainian policy of the self-proclaimed “president” of Belarus, Alexander Lukashenko. It will just suffice to mention his statement in an August interview about “Belarus’ readiness to cross the border of Ukraine in order to make it Ukrainian”.

In Lukashenko’s view, “Ukrainian Ukraine” should be part of Russia, which is about to become Belarus. And it’s not just empty threats and loud words. In the same interview, he expressed readiness to allow Russia to deploy its troops on Belarusian territory. And this would open another — the “Northern Front” against Ukraine.

As expected, mass protests in Belarus, provoked by the falsification of the results of the presidential election by the country’s leadership last summer, pushed the Lukashenko regime into Russia’s “arms”. And the last step in this process was put by the incident with the forced landing in Minsk on May 23, 2021 of the Ryanair’s Boeing 737 passenger plane, performing an international scheduled flight from Athens to Vilnius. A well-known Belarusian oppositionist, R. Protaskevich, was taken off the plane and arrested.

Of course, like all other civilized countries, Ukraine condemned the Belarusian authorities for brutally repressing the opposition, not to mention the actual “air piracy” with the use of MiG-29 fighters against a civilian passenger plane. Which once again demonstrates the complete unity of the Lukashenko regime in Belarus with the Putin regime in Russia. Recall the destruction by Russia of the Malaysia Airlines’ Boeing 777 passenger plane (flight MH17) on July 17, 2014. As a folk wisdom says: “like master, like man”.

However, there is more to that. A new Northern Front may indeed open against Ukraine. Belarusian armed forces alone do not pose a significant threat to Ukraine. They are consist of four mechanized brigades, two airborne brigades, a special brigade, three artillery brigades and one missile brigade. Besides, the Belarusian armed forces include units of the Air Force, Air Defense, CBRN, communications, etc. There are also territorial defense forces designed to conduct guerrilla operations on the territory of the country in case of its occupation.

All these forces are much smaller than the Armed Forces of Ukraine, but are approximately equal to a Russian combined arms army, and can now act together with Russian troops deployed in the Ukrainian direction. However, Russia and Belarus have long been cooperating closely in the military sphere.

Thus, back in 1999, as part of the creation of the Union State of Belarus and Russia, an agreement on military cooperation between the countries was concluded. Its main provision was to create a regional group of troops of the two countries, which was initially directed against NATO, and now is aimed against Ukraine as well. Subsequently, this agreement was supplemented by agreements on joint protection of the Union State’s airspace external border and a single regional air defense system of Russia and Belarus.

Under these agreements, units of Russian troops are systematically transferred to the territory of Belarus for various military exercises. The main one is the Strategic Command and Post Exercises (SCPE) of the “West” type, during which the scenario of the offensive operation of the armed forces of Russia and Belarus against Poland and the Baltic States is rehearsed.

We have mentioned this many times, so we will not tire readers with already known details. We will just remind that since 2013, during the “West” SCPE, tasks of Russia and Belarus’ joint military actions against Ukraine have also been practiced. Such a task, in particular, is one of the elements of the “West-2021” SCPE, which has already actually begun on Russian and Belarusian territory with the participation of the armed forces of the two countries.

Within the framework of the preparation for the SCPE in August of 2021, some units of the 1st Tank and the 20th Combined Arms Armies of the Western Military District and the Airborne and Engineering Troops of the Russian Armed Forces arrived in Belarus. In addition, tactical aviation from the 6th Air Force and Air Defense Army and long-range aviation will be involved and will fly in the airspace of Belarus, use its airfields for temporary bases and launch missile and bomb strikes on targets placed on Belarusian bombing ranges.

Besides, other joint military activities with Russia are being held in Belarus, in particular, the Russian-Belarusian exercise “Slavic Brotherhood”. They usually involve battalion/company tactical groups of Russian airborne troops and Belarusian special operations forces. They practice anti-terrorist operations. But last year, during the mass protests in Belarus, for the first time, Tu-160 and Tu-22M3 strategic bombers were involved in the exercise, which gave it a qualitatively new character. Also, Russian reconnaissance aircrafts operate systematically in the airspace of Belarus. At this, intelligence is being conducted against both — NATO countries adjacent to Belarus and Ukraine.

It should also be noted that since the collapse of the Soviet Union, in Belarus remained two Russian military facilities, namely — the 43rd Communications Center of the Russian Navy “Vileika”, as well as the radar of the missile defense system “Volga” (“Gantsevichi”). An agreement was recently reached between Russia and Belarus to establish a joint air force and air defense training center in Lida, Belarus. In the center, and in fact at the Russian-Belarusian military base, there will be deployed Russian multi-role Su-30SM fighters. Besides, units of Russian troops participating in military exercises in Belarus now have access to former Soviet warehouses in Belarus.

Threats from the North became absolutely real for Ukraine after Russia and Belarus finally agreed on a package of integration documents in August of 2021, which was Minsk’s complete surrender to Moscow. In fact, in the near future Belarus will become an ordinary Russian “province” with only formal signs of statehood. And now the Belarusian leadership is forced to carry out all orders from the Kremlin, regarding Ukraine included. Moreover, if Moscow decides to expand the scale of its armed aggression against Ukraine, Belarus will not only provide its territory for the deployment of Russian troops that will attack our state, but will also join the military operations of the Russian Armed Forces.

Alexander Lukashenko spoke about this openly in the above-mentioned interview. According to him, “Russia together with Belarus can make Ukraine’s life unbearable”. And, most interestingly, for some reason he believes that 90 % of Ukrainians support him.

Well, let’s see how they can do it. Russia is already under Western sanctions, and last year similar devastating sanctions were imposed by the United States and the European Union on Belarus as well. In August of 2021, on the anniversary of the beginning of the protests in Belarus, sanctions against the Lukashenko regime were also imposed by Canada and United Kingdom. They thus dealt another powerful blow to the Belarusian economy. In general, the mentioned restrictive measures include:

Unlike Russia, which is still trying to cope with Western sanctions at the expense of oil and gas exports, these restrictions by the United States, the European Union and their partners are a real disaster for Belarus. Recently, it is losing entire sectors of its economy. In particular, only due to the refusal of Western countries to import Belarusian potash fertilizers, Belaruskali has virtually stopped operating, as a result of which Belarus has already lost up to 3 billion US dollars.

And sanctioned companies are no just banned from selling their products, they cannot buy equipment and make payments in US dollars and Euros, even to Russia and China. Indeed, who needs extra problems when it is much easier to refuse to cooperate with Belarusian businesses, even those which are not under sanctions.

So far, all this still restrains the aggressive actions of the Belarusian authorities towards Ukraine. However, I want to remind you again — we should not relax. And even more, the situation in Belarus requires Ukraine to strengthen its own defense capabilities, including in the North direction.

Since 2014, Ukraine has already deployed additional troops on the border with Belarus, protecting Kyiv and the main transport routs to our country from Belarusian territory. But now, this is probably not enough. Belarus is really the same source of threats to Ukraine as Russia.