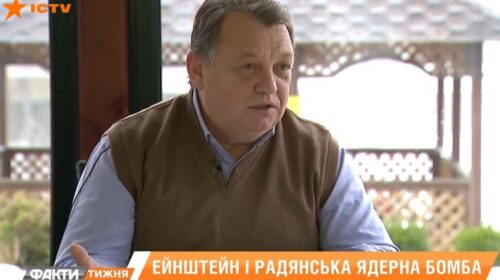 This story is about who and how began to develop a new type of weapon — nuclear — about how to use it in future wars and the benefits it gives to those who own it. Of course, the role of intelligence cannot be overlooked, because it has become actually decisive in such a “case”. In particular, it was through intelligence that the Soviet Union gained access to nuclear technology.

— In 1941, Soviet intelligence reported on the development of nuclear weapons in the United States, Great Britain and Germany, after which such work began in the USSR, which first conducted nuclear tests in 1949 at the Semipalatinsk test site, — Victor Hvozd, President of the  Independent Analytical Center for Geopolitical Studies “Borysfen Intel”, is telling journalist Taras Shako.

What happened next in “nuclear case” and what it led to is well known today, including Ukraine’s giving up nuclear weapons. But no less interesting and even instructive in V. Hvozd’s story are the details of the work of spies and intelligence structures in foreign secret laboratories.

The viewer may also be interested in the structure of the former Soviet intelligence agencies of the 1930s and 1940s, the name of each of which in one way or another outlined the tasks assigned to them. Such as NKVD (political intelligence), GRU (military intelligence), Comintern (Party intelligence), and border intelligence.

From the audience’s feedback: “…Very interesting, meaningful, in addition, you are a good narrator whom the viewer trusts! …How about a series of author’s programs —Intelligence: Secrets and Truth or From the Head of Intelligence?..”

Such meaningful comments emphasize the relevance of the topic and give grounds for its continuation. Because thanks to this we will soon realize: what kind of world we have to live in today, how will we react in time to the intelligence obtained and, if necessary, will we be able to timely prevent troubles that may happen to us at the initiative of foreign “benefactors”.

Watch the full interview with Victor Hvozd (in Ukrainian):