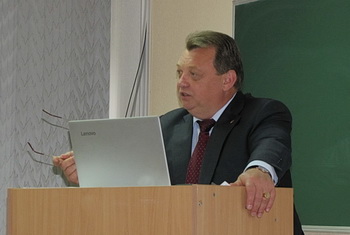 The course “Historical, Legal and Political Aspects of the State’s Intelligence Activity” in Kyiv-Mohyla Academy

Some of the many programs being studied by students of the National University of Kyiv-Mohyla Academy are most modern. For example, “Historical, Legal and Political Aspects of the State’s Intelligence Activity”,which has been taught by Victor Hvozd for the fourth consecutive year, and the students’ attention to which has been increasing. “And not just because of the romantics inherent in such an important matter, says V. Hvozd. — It is forgotten the moment the lectures and seminars begin. Just the amount of knowledge required is quite large, while its understanding and digesting is very important. Especially when students begin to understand the importance of the legal aspects of the organization of intelligence agencies and control over their work”.

While teaching such an important subject, V. Hvozd keeps reminding the students that the Intelligence is nothing more than a special instrument of the state, without which its national security cannot be guaranteed. Therefore, it is necessary to master as much as possible the analysis of the legal and political aspects of the activities of our intelligence agencies, to study the history of their creation, to compare with the activity of foreign agencies. As for the analysis of the information received, its evaluation, there is no need to remind students again: they are greatly interested in the educational material, as confirmed by the numbers of those attending V. Hvozd’s lectures. Thus, more than 80 students studying at the Department of General and Public Law, and three dozens of students studying Political Science at the Faculty of Social Sciences and Social Technologies, persistently master the course, attend seminars and do tests. By the way, for high results of the last six months, V. Hvozd, with pleasure, remarked the twelve students who had the highest rating and the best knowledge, and presented them with copies of his book “Historical, Legal and Political Aspects of the State Intelligence Activity”.

“I am impressed by the students’ attitude to learning,” says V. Hvozd, “in particular, how they perceive the subject that I teach at the Kyiv-Mohyla Academy. In this semester, I prepared and conducted 8 lectures and almost the same number of seminars. By the way, other educational institutions are interested in this topic. At the beginning of the current academic year I was invited to the National Aviation University to lecture on the subject, which I did with pleasure”.

And the most telling may be the feedback, that is the students’ perceptions of this specific material are determined, and the student-teacher communication. In a word, it is continuous monitoring in the form of tests. Quite unusual tests that are unlikely to be seen anywhere yet, and are also specifically designed for virtually every lecture. They deserve a separate story because they can be of interest to both, the teaching staff and those who are asked to answer questions. Here are some students’ answers to one of many questions. In their own words (and in their own style):

“…The course is extremely useful because we can hear the opinions of a professional”,;

“…The course was one of the most interesting, if not the most interesting. I liked the instructive examples from the practice of the teacher and theory… The atmosphere at the seminars is very relaxed, but at the same time we did not relax, but on the contrary, were encouraged to study and get new knowledge…”;

“Thank you for the subject. I have always dreamed of being a part of the diplomatic system and you have in some way strengthened my desire…”;

“I am extremely pleased with my choice of this course, which was taught very professionally. We have been explained not only theory but also contemporary problems of the Intelligence, which helped to form critical thinking about political manipulations…”;

“…I like it that the teacher focused not only on the material but also on practical advice. A great atmosphere for learning…”.