“There is no solution to be found in the Minsk Process, only political cover for European states unwilling to call aggression by its name”

— Could you kindly give an assessment of recent developments around Ukraine regarding Russia’s aggressive actions of covert occupation and subsequent annexation of the Ukrainian Crimea, and its military aggression in the Donbas?

— The irony is that we are still talking about Russian “covert actions” when what the Russians have done in their war against modern political culture is so obvious that we can say that any lie Moscow tells will be considered to be a plausible explanation for any conceivable crime against humanity.

— In your opinion, when and under what circumstances the Crimea will return to Ukraine? 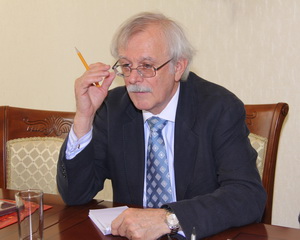 — I do not expect Crimea to be returned to Ukraine, or given independence (which I consider to be an acceptable alternative), until after Russia becomes a modern political culture. The critical thing at this moment is to reaffirm that the Russian seizure of Crimea is and will always be considered unacceptable. Just as the United States never recognized the Soviet occupation of the Baltic States, Crimea will never be considered to be part of Russia, no matter what form that state takes in the future. There must be ongoing (i.e., permanent) financial consequences for Moscow for its disregard of international norms regarding the occupation of Crimea as well as for the crimes against humanity committed by the Government of Russia against the indigenous and legitimate peoples of Crimea – cultures that have resided in this land for hundreds of years prior to rise of Muscovite Russia.

— What format of the negotiation process on the settlement of the Russian-Ukrainian conflict in the Donbas would be much more effective, and what should be done for this?

— The Minsk Process is Orwellian. Moscow starts a war, then is invited to arbitrate the conflict it initiated! There is no solution to be found in the Minsk Process, only political cover for European states unwilling to call aggression by its name. No negotiation format is required; Russia needs to end its war against Ukraine, and local criminals need to stand trial for their individual crimes.

— What do you think about the possibility of Russia and Europe’s “freezing” the conflict in the Donbas by the “Trans-Dniester” scenario?

— There will be no “freezing” of the conflict in the Donbas. The intensity of Russian combat operations will go up and down depending upon what Moscow wants from the West at any given moment. But, as is the case with the Georgian territory taken by Russians in 2008, the Donbas is already being governed as Russian territory.

— Your vision of possibilities of cancellation /weakening or maintaining/strengthening of the “Donetsk” package of the West’s international political and economic sanctions against Russia from July 31 2016.

— I fully expect the sanctions will be weakened over time, since most European states simply don’t want to be distracted by Russian aggression when it is limited and the Russians have managed to create some ambiguity through information warfare. Ukrainians, however, are not without fault. The corruption of Ukrainian political, military, intelligence, and business elites undermines the heroic efforts of the Ukrainian people. The history of Ukraine is the repetition of this story; Ukraine has yet to find its George Washington – a man whose financial and political ambitions do not exceed his love for his country.

— Your vision of appropriateness, necessity and prospects of Ukraine’s accession to the only effective as of today coalition (collective) security system — the North Atlantic Alliance — NATO. Is it possible in this regard to consider Ukraine’s joining the NATO Membership Action Plan as our country’s first step? Is it mandatory?

— Ukraine missed its chance to join NATO when its leadership both lacked vision regarding what type of political culture was represented by Moscow and wanted to extend the period when the assets of the nation could be stolen. Emulating Moscow, Ukraine’s leaders expected to be able to milk the Ukrainian cow for a protracted time without having the Muscovites attempt to move in on the local opportunity to exploit ordinary Ukrainians. I would like Ukraine to go through the process of joining NATO if only because doing so would help Ukraine dump its primitive political culture and modernize. This is probably far more necessary for Ukrainian elites than ordinary Ukrainians born after the collapse of the Soviet Union.

— What is the most appropriate and correct procedure of a candidate country’s (including Ukraine) joining the European Union and NATO? What should be primary and what — secondary? I mean, first NATO and then the EU? Or vice versa? And why in that order?

— The processes for joining both organizations would be very valuable for Ukraine. I believe that the only advantage of NATO over the European Union is that it includes working with the North Americans as well as other Europeans. Canada and the United States, while part of European political culture, are more cosmopolitan than Europe in my view. While it is important, in my view, to preserve one’s past, one shouldn’t become bogged down in it. Evolution is necessary for the species to survive. Personally, I find the most beautiful people to be persons of mixed race.

— Do you consider possible bringing into Ukraine peacekeeping forces of coercion to peace under the auspices of the UN, EU or NATO?

— I do not believe that we are likely to see genuine peacekeeping forces introduced into Ukraine. Furthermore, I don’t believe it to be necessary. Such peacekeeping forces will not be able to “compel” the Russians to behave in a civilized manner. “Peace” will come to Ukraine only when regime change of one sort or another comes Moscow. Thus, it is not U.S. policy but the military aggression of Putin that introduces the subject of regime change to the Russian future.

— Your assessment of the state and prospects of bilateral relations between the USA and Ukraine taking into consideration Russia’s military aggression against Ukraine. 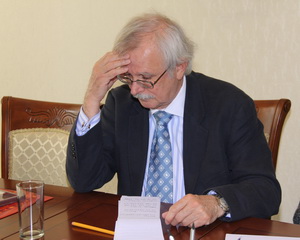 — It is Putin’s military aggression that has changed the bilateral relationship between the three countries. However, it is the perceived failure to deal with corruption that threatens to undermine much of the goodwill among Americans won by the younger generations in their struggle to secure Ukraine’s independence and a better future for themselves.

— Should we expect changes in the plans and practical actions of NATO/US towards Ukraine after the Commander in Chief of the Allied Forces in Europe is the US Army General Curtis Skaparrotti who will replace at this post the US Air Force General Philip M. Breedlove?

— I’m really not competent to comment on General Skaparrotti or his views. In general, however, I believe that it is fair to say that the United States Army has already come a long way in transforming its thinking about contemporary warfare as a result of Putin’s military aggression against Ukraine.

— How do you assess the thrust and consequences of the fighting in Syria? The reasons for the partial withdrawal of Russian troops from Syria.

— I believe that it is still premature to give an assessment of the so-called Russian withdrawal from Syria. It would be one thing for Putin to declare victory and take his forces home. However, we still cannot even say that is the case. Clearly, Putin was spending a lot of money in Syria that is needed by his own citizens during a period of financial hardship. Still, Putin hasn’t demonstrated over time that he really is in any way concerned about his people or the quality of life they lead.

— Is it possible to resolve the Syrian crisis peacefully (diplomatically), including within the framework of negotiations in Geneva/Vienna?

— Any potential solution that does not involve maintaining the Russian military facilities in Syria will be unacceptable to Putin, and the costs of maintaining these facilities in terms of human lives lost or financial privations of Russian citizens are inconsequential to him. Thus, I doubt that diplomatic negotiations will lead to any peace other than the peace of the graveyard for Russian soldiers and Syrian civilians.

— After downing November 24, 2015 in the airspace of Turkey of the Russian Su-24 bomber, what provocative actions should be expected from the Russian side and where: in the area of ​​the Black Sea Straits; on the Turkish-Syrian border; in the south-eastern regions of Turkey, in the island zone or in larger resort cities of the country?

— I don’t think that Putin will be provoking Turkey, as doing so might finally provide him with one too many enemies. Doing so could quickly lead to a direct conflict with the American air forces stationed in Turkey, and result in a dramatic demonstration of how much better trained the American pilots are.

— What new forms and methods of “hybrid warfare” (“war of the new generation”) do you see in the ways of realization of Russia’s aggressive (“hybrid”) policy? 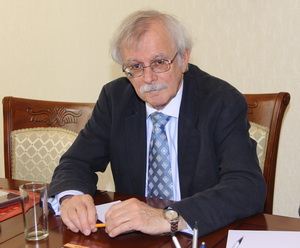 — Let me begin by saying that Western notions of hybrid warfare do not reflect the complexity of Russian New Generation Warfare. First and foremost, those of us who subscribe to liberal political culture need to understand that Putin is already at war with us. Attempting to mobilize all the traditional forces of the past against the modern world, Putin is attempting to destroy all the achievements of European political culture. In this regard, Putin is correct. We are opposed to the vertical power structure, and I personally have stated on Russian television that “government is a necessary evil.” Putin can murder as many people as he wants, but he will not kill the human spirit to live free – to live one’s life as one chooses without imposing one’s beliefs upon others so that they might also live as they choose.

— At what directions or against which countries may we expect new “hybrid” threats (including «wars of the new generation») from Russia — especially after the partial withdrawal of Russian troops from Syria?

— Again, I don’t think we should be talking about “post-Syrian” Russian policy quite yet. Putin will always be looking for a target of opportunity, but I expect the Baltic States to be next on his revanchist agenda.

— Please tell us about the plans and prospects of the Potomac Foundation in the analysis and assessment of threats to international security, including for 2016.

— Among other efforts, The Potomac Foundation is currently working on the preparation of a net assessment of the military situation in the Baltic Region. We are also involved in supporting the Government of Poland in its efforts to insure a successful Warsaw Summit in early July.

— Which spheres of cooperation with the Independent Analytical Center for Geopolitical Studies “Borysfen Intel” do you consider the most attractive and most needed (appropriate) for today and for the future?

— Clearly the most important immediate area for collaboration is the lessons to be learned from Russia’s war against Ukraine. In this regard, especially, Ukrainians have much experience to share with NATO and the European Union.