The meeting of Ministers of Foreign Affairs of Ukraine, France, Germany and Russia in Paris on the 3rd of March, 2016, where they discussed issues of the Russian aggression in Ukraine,  has already been spoken and written about a lot. Attention was drawn, in particular, to the fact that the sides relevant to the subject, do not any longer insist  on changes to the Constitution of Ukraine, but are interested in local elections in the occupied territories of the Donbas.

In this context, based on the results of the meeting and the statements by the representatives of Germany and France, we should  point out  the consistent position  of the representative of the Ukraine, our  Foreign Minister P. Klimkin, in particular,  regarding the fact that these elections can take place only after the restoration of full security, inclusive, with the demilitarization of the region and returning Ukrainian border control.

At the same time, representatives of Europe – Foreign Ministers of France and  Germany – clearly reaffirmed their commitment to the settlement of problems in Ukraine related to the Russian occupation, even at the expense of Ukraine. They openly showed more interest in the lucrative cooperation with Russia than in the human rights and freedoms. And Ukraine does  not interest them … 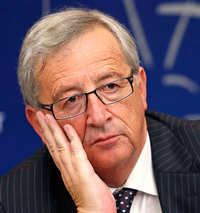 Noteworthy is the fact that this meeting in  the so-called “Norman format” actually took place against the background of the unresolved issue of visa-free regime for Ukraine and the speech of the President of the European Commission Jean-Claude Juncker on the absence of prospects for our country in obtaining membership in the EU and NATO over the next 20-25 years. Interestingly, the said statement was made in the Netherlands almost a month before the referendum on Ukraine’s association with the EU. Perhaps the words of the Head of the EC will be a very negative signal to the population of the Netherlands. Alarming is also the UN’s  position over  the documents issued to  Ukrainians by  the occupation authorities. Disturbing is  the development  of events around N. Savchenko, in particular, the fact  that at at her last court trial there were no representatives of  Ukrainian authorities. There are many other less notable and alarming facts.

All these facts once again testify to the fact that some countries are not supportive of the Ukrainian nation – our fate is in our own hands. On the other hand – all this can be interpreted, in particular, as the ineffective work of Ukrainians to explain our reality to the population, in particular – to the citizens of Europe. We still cannot understand that in a democratic world government’s  opinions are based on beliefs of the people, and not vice versa, as it was in Soviet times.

Perhaps for the first time the phrase “pressure on Ukraine” was voiced openly. It is obvious that these words require the official Kyiv’s appropriate response.