“Let No One Interfere with Our Affairs” 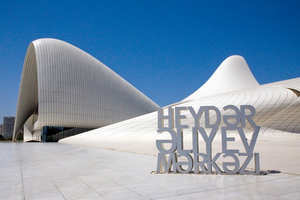 This phrase sounded in the speech of the President of Azerbaijan at the opening of the Heydar Aliyev Center in November last year. There were then uttered other words addressed, including to the West, to get close to which, until recently, was so eager the Azerbaijan Republic. “Sometimes they state  that we should integrate into Europe, – Ildar Aliev said then. – We do not need to integrate anywhere … Could we be taken? No. This is the bitter truth. Therefore, it is necessary to rely only on ourselves and our own internal resources“.  He also explained that the reason for such a “zigzag” in the current  policy of Azerbaijan, which before had been actively working with Western partners is  Europe itself, which by humiliation of Muslim refugees denies its own  values.

There is logic in these words: emigrant waves from the Muslim Middle East have  been splashing against  the  border areas of the European Union and there is no end in sight. But it is necessary to clarify: the aforementioned “zigzag” somehow does not fit with the word “reason”. The word “cause” is more appropriate here. Since the story of the refugees  the Azerbaijani President’s expressions of his attitude towards the West. The reason, apparently, is  the slippage in the construction of the Southern Gas Corridor (for which Baku has long had  certain hopes) in particular,  and slowing  of the process of cooperation with Azerbaijan by the West – in general. As for the so-called corridor,  the Western partners have been saying for years that  they are interested in this project. “We believe that “theSouthern Gas Corridor” will meet at least 10 percent, and in the best case – 20 per cent of the European demand for gas“, the Head of the EU Delegation to Azerbaijan Malena Mard assured the Baku leadership. But these were only words, even if  pleasant to the ear. But apart from words, construction of a gas pipeline needs investment. Recently there were delays with this. “This is a major project, not only from the point of view of the fact that its length is 3 thousand 500 kilometers – the distance from Azerbaijan to Italy – but also from a financial point of view. Approximately  45 billion US dollars will be invested into the project. “The Southern Gas Corridor consists  of four projects – the “Shah Deniz-2“, the expansion of the South-Caucasian Pipeline, Trans–Anatolian (the TANAP) and  Trans-Adriatic (TAP) projects. This is the whole chain, and these projects are its links. If there are delays in one of these projects, they will affect all other projects“, the Minister of Energy of Azerbaijan N. Aliev warned at a recent press conference in Baku, which was also attended by decision makers from the EU, USA and Turkey. 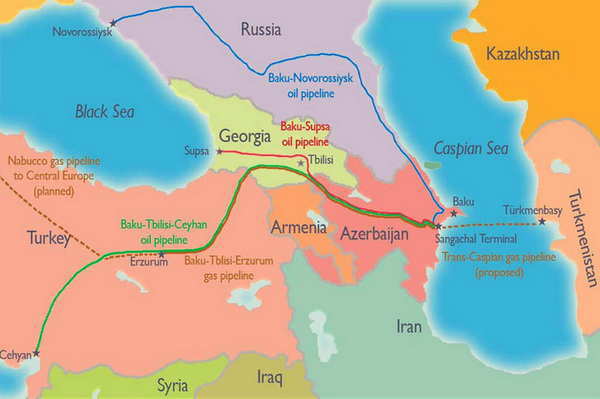 Delays in the construction of this object did happen, the work did not go as it was supposed to, and this, to put it mildly, does not suit  the Azerbaijani side. At some  point in  Italy environmental advocates spoke against the project, at another company-partners in  construction walk back from their previous commitments. Greece’s government even  proposed to revise the parameters of the project – the acquisition of its share in the TAP, increasing the cost of transit and reduction of  the price of gas, which  Greece was going to buy from Azerbaijan. In a word, it’s not all as easy  as the leadership of  Baku supposed. But in September 1994, when in the Baku Palace “Gulistan” was signed an agreement to bu1ild a gas corridor, those present called it the “contract of the century”. The  agreement on production sharing on the development of deepwater fields “Azeri”, “Chirag”, “Guneshli” alone was written  on 400 pages and in 4 languages. Besides,  13 companies expressed their desire to participate in the project (Amoco, BP, McDermott, Yunikal, SOCAR, LUKoil, Statoil, Exxon, Turkia Petrolleri, Pennzoil, Itochu, Remco, Delta) from 8 countries (Azerbaijan, US, UK , Russia, Turkey, Norway, Japan, Saudi Arabia). The next step was further 26 agreements with 41 oil companies from 19 countries.

Twenty years later, in September 2014, at a ceremony marking the first anniversary of the “contract of the century” and laying the foundation of the Southern Gas Corridor, President I. Aliyev summed up the results of Azerbaijan’s  international cooperation in this sphere. “Azerbaijan is the main investor into TANAP project and the main financial burden will be imposed by Azerbaijan on itself. In the  “Shahdeniz“, and TAP and other projects,  Azerbaijan is funding its share. Thus, the obtained in due time economic profit today serves our common interests, President I.  Aliyev said about the progress of the work, pointing out  that Azerbaijan was becoming very important in ensuring energy security of Europe. – The proven gas reserves amount to 2.5 trillion cubic meters and the projected reserves are at the  level of 4-5 trillion cubic meters“.

But note that at the time Baku forcibly expanded its share in the “contract of the century”, as due to the global economic crisis, not all its partners had the previously promised funds. Besides, in 2014, entered into force economic sanctions against Russia, which one way or another, had negatively affected the economic situation of the EU countries. Plus,  Gazprom was not going to give up its positions in the gas market, including to Azerbaijan. Needless to mention what  the Kremlin may resort to in defending its interests. Example – Ukraine fighting  separatists (Azerbaijan, as we have already mentioned, considers Ukraine a monopolist in gas transit). And the invited   Ukrainian representatives at the IV Global Forum Baku (March 10-11, 2016), should not just bear in mind, but be prepared for difficult negotiations, where our arguments must be perfectly justified. 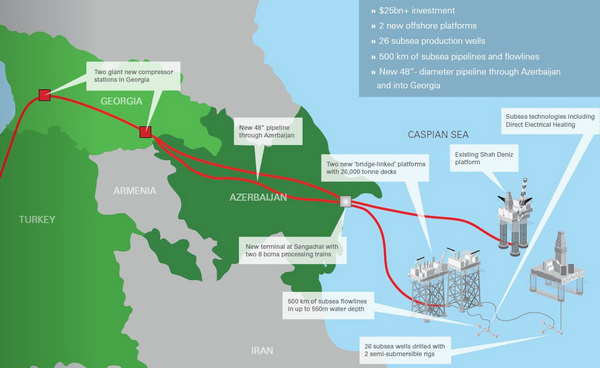 Azerbaijan is trying to establish cooperation with the EU  not only in matters of energy security. Thus, the Ministry of Education of Azerbaijan and the European Union have planned a “Twinning“ project worth 19 million US dollars in  order to bring the Azerbaijani education into line with the European higher education. “Other initiatives are expected“, promised the EU representative in Azerbaijan, Malena Mard, referring to the sphere of food security and the agricultural sector, on which a new agreement is being prepared.

Azerbaijan is going to increase its non-oil potential and to sharply increase exports by the construction of large industrial objects. They have laid the  foundation of the Chemical Industrial Park, where the first enterprises have been  created. So far, the construction and engineering work in all these spheres are carried out by foreign contractors. But it is also expected that they will soon be replaced by domestic professionals. 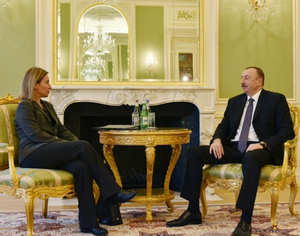 I. Aliyev’s phrase “It is necessary to rely only on ourselves“ has become a catch phrase, and with the course of time it may start sounding as a sort of a spell. It was felt in the position of the Azerbaijani leadership both at the recent Munich Security Conference, which mentioned the lack of the required format of cooperation between Azerbaijan and the EU, and during  the meeting of President I.  Aliyev and the EU High Representative for Foreign Affairs and Security Policy, Vice-President of the European Commission, Federica Mogherini. These activities were  reflected in the media in  conventional tonality, but with certain moderation in the comments, so to speak. 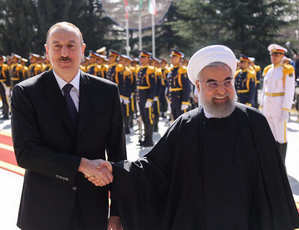 By the way, its dissatisfaction with Europe Azerbaijan hurried to “brighten up” by the rapid rapprochement with Iran. The signed during Azerbaijan’s President’s  visit (in the second half of February 2016) to Iran  bilateral documents relate to a number of important issues for both countries, the relationship between which  “will play a certain role in ensuring security in the region”.  Moreover, at the meeting of the Presidents it was pointed out  that they would actively develop cooperation in a trilateral format: “Iran-Turkmenistan-Azerbaijan”, “Iran-Azerbaijan-Russia”, “Iran-Azerbaijan-Georgia” and “Iran-Azerbaijan-Turkey”. The tripartite format is not a union, but to go out on a great political road, one  always must make the first sure step. Including in the issue, which Azerbaijan cannot solve  through the mediation of the EU – relations with Armenia. True, Azerbaijani media reported that the Karabakh conflict was  not widely discussed during the visit. But this “… shows that Iran’s position on the territorial integrity of Azerbaijan is already well established, and there is no need to repeat it“. But the signed agreements cover almost the entire range of bilateral cooperation.

It is even  planned  to  open in 2016 a railway communication, and, in particular, to transport  Iranian goods into the sector of the Black Sea via Azerbaijan, not through Armenia, as it had been planned before. There are agreements on the development of oil and gas and energy spheres. That is, having voiced  its  perception of cooperation with the doubting West, Baku made easier the process of establishing links with neighboring Iran, and this  strongly promises future dividends, and as recent events show,  shook its partners in the construction of the gas pipeline, who arrived in the Azerbaijani capital to confirm their cooperation.