4–6 September, 2018 the 28th Economic Forum is held in Krynica Zdrój (Poland), themed “A Europe of Common Values or A Europe of Common Interests?”. President of the “Borysfen Intel” Center Victor Hvozd during a Forum made a presentation entitled “Cyber Conflict and Geopolitics — the Cold War’s New Front”.

The theme of our debates is extremely important, due to the fundamental geopolitical changes taking place in the world, and their direct impact on cyberspace as a separate environment of confrontation between different subjects of international relations.

First of all, this concerns the transformation of a unipolar model of a world order, led by the United States, which arose after the collapse of the USSR, into a new multipolar system with a few centers of power of different levels.

The result of such changes was the emergence of new players in the world arena with their interests and lines of confrontation between them, which has made the world more rigid and unpredictable.

In turn, this has led to an escalation of confrontation in cyberspace, which is becoming global and can be compared to world wars with the use of weapons of mass destruction.

Evidence of this is the spread of massive attacks on computer systems of leading and other countries with critically dangerous consequences in the main spheres of their life (including state management and military command, economy, finance, energy and transport).

Besides, the cyber-espionage, the use of cyberspace for interference with electoral and political processes, as well as massive information wars on the Internet are gaining momentum.

At this, there is a real possibility of cyberwars’ turning into trade-economic and sanction wars, as well as into a direct armed confrontation.

In particular, an example of this is Washington’s sanctions against Russia for the latter’s interference with electoral processes in the United States. At the same time, according to the doctrinal principles of the United States, they reserve the right to retaliate with military force in response to cyber attacks.

The main aspects of cyber warfare that require systemic revision

In general, these circumstances require a systemic revision of all major approaches to cyber warfare, including definitions or clarifications:

Proceeding from this, the forms and methods of actions in cyberspace, both offensive and defensive, can be optimized.

Subjects and parties to confrontation in cyberspace; allies and adversaries 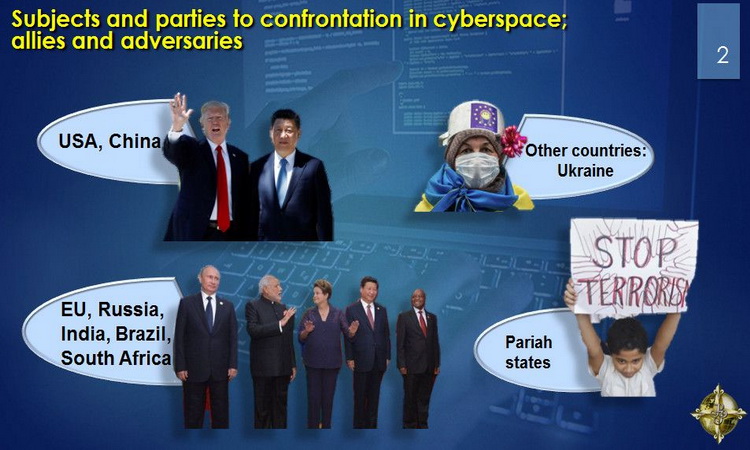 Subjects and parties to confrontation in cyberspace are in varying degrees all participants of international relations that are capable of defending their own interests and having the necessary tools (technologies) for their realization by means of cyberwars. Based on the structure of the modern multipolar system of the world order, they can be divided into a few main groups, which include:

Lines of confrontation in cyberspace

Taking into consideration the strategic goals and interests of these subjects, we can identify the main lines of confrontation in cyberspace, which reflect contradictions between them in political, economic, security and other spheres. Based on this, first of all such confrontation takes place between:

Besides, there is also a wide range of other lines of confrontation in a cyberspace of situational, regional, local, and other nature. In particular, examples of this are the confrontation between:

Separately we should mention the confrontation in cyberspace between Russia and Ukraine and other former USSR’s countries of a democratic and European choice due to Moscow’s attempts to establish control over them. Of this and Ukraine’s European and Euro-Atlantic choice, make our country an objective ally of the United States, NATO and the EU in their confrontation with Russia, including in cyberspace.

The new geopolitical situation in the world also requires changes to the strategy of information wars in cyberspace. The basis for such changes may be the USA’s new approach to the principles of the use of armed forces as determined in the updated conceptual documents, in particular in the National Security Strategy (2017) and the National Defense Strategy (2018). 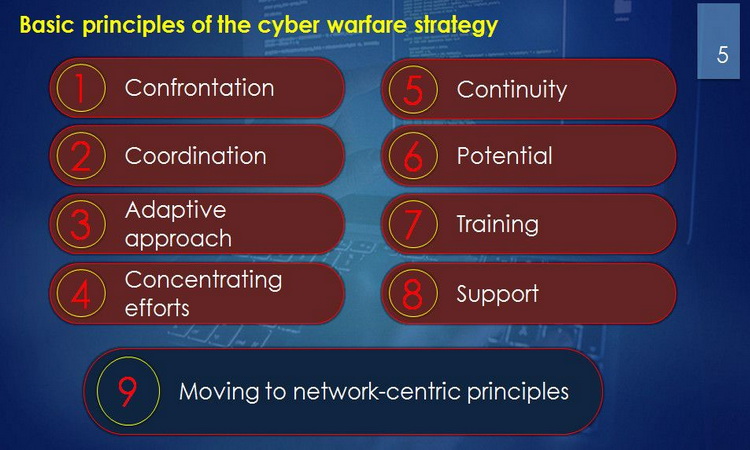 That is why the current cyber warfare strategy should be based on the following main principles:

Intelligence support of confrontation in cyberspace

As the head of the two intelligence services, I would like to turn attention to the intelligence support of cyber warfare. Thus, the complication of a situation in the world and its becoming more and more dynamic and unpredictable, raises the requirements for intelligence. In fact, without credible, complete and timely intelligence data, it is impossible to effectively implement any of the above-mentioned principles of cyber warfare. First of all, this concerns the following issues:

The need for such data requires creation of a special system for collection of relevant information, as well as its analysis and preparation of recommendations for the forces and means for cyber attacks and counterattacks.

In particular, such information may be collected:

These data should be analyzed by special units, staffed with highly trained professionals.

At this, within the framework of network-centric approaches, close interaction should be established among different intelligence agencies both within one country and the union of countries and with their partners.

Forces and means of cyberwars 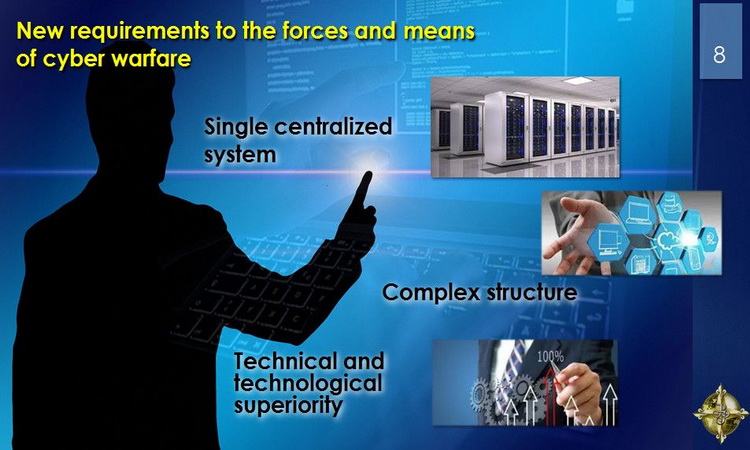 In general, these approaches put forward new requirements to the forces and means of cyber warfare. In particular, among such requirements we may point out as follows:

To date, the above-mentioned approaches are already being actively implemented in practice.

For example, based on geopolitical changes taking place in the world, amendments are made to conceptual documents of the leading countries and international organizations regarding confrontation in cyberspace. In particular, among such steps we may mention:

in Russia — preparation of Cyber Security Strategy of the Russian Federation.

Provides: definition of strategic directions of actions to ensure Russia’s cyber security and responsibilities of state and non-state bodies.

Forces and means of cyberwars of the leading countries

According to conceptual documents of the leading countries and international organizations, the improvement, development and formation of their forces and means of cyber warfare is also being carried out. In this regard, the most illustrative are:

in the USA — the elevation of the status of the Cyber Command to the level of a unified combatant command (2017);

Due to this, the US Cyber Command was withdrawn from the US Strategic Command and received a status equal with other combatant commands.

The main tasks of the US Cyber Command:

in NATO — introduction of new bodies, including the NATO Communications and Information Agency, the NATO Cooperative Cyber Defence Centre of Excellence (Tallinn) and the NATO Cyber Operations Centre (planned to be deployed);

The main tasks of these bodies are:

in Russia — creation of the Information Operations Forces within the Ministry of Defense (2013) and the Cyber Command of the General Staff of the RF Armed Forces (2014).

The main tasks of these bodies are:

Cooperation between NATO and the Alliance’s Partners

At the same time, cooperation in the cyber sphere is being developed between NATO and the EU, and with their partners, including Ukraine. Examples of this are: 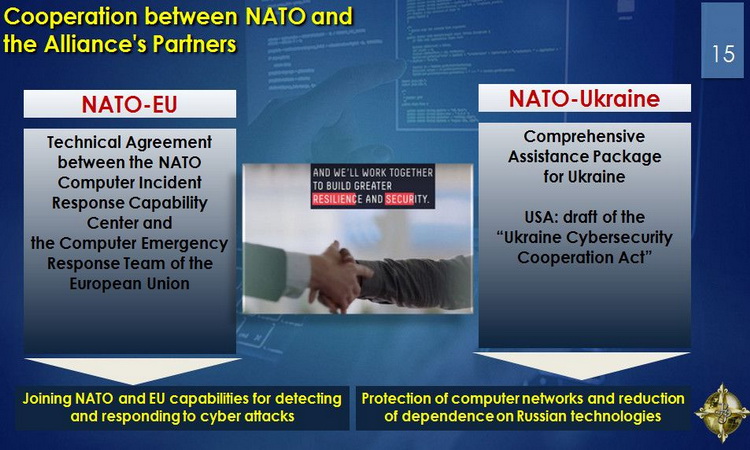 NATO-EU — signing in 2016 of the Technical Agreement between the NATO Computer Incident Response Capability Center (NCIRC) and the Computer Emergency Response Team of the European Union (CERT-EU).

It provides for joining NATO and EU capabilities for detecting and responding to cyber attacks.

Despite the steps being taken by NATO and its partners to improve the system of cyber warfare, it is still not complete. This reduces the ability to implement and protect common interests in cyberspace. 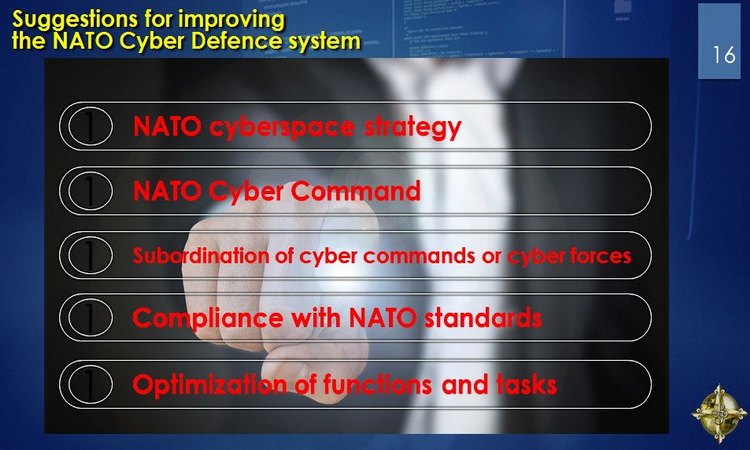 One of the solutions to this problem may be:

Optimization of functions and tasks between the bodies of the cyber warfare of the members of NATO and the Alliance’s partners, taking into account their capabilities and interests, their role and place in global and regional computer networks, as well as specific threats from the actions of adversaries in cyberspace.

In particular, such functions and tasks of the cyber warfare forces of Ukraine as NATO’s partner may include:

For today, an example of successful cooperation between Ukraine and NATO in this sphere is the Alliance’s assistance in the cyber defense of Ukrainian critical infrastructure. In particular, there are systematic joint trainings on protecting critical infrastructure, including with the participation of the NATO Energy Security Centre of Excellence (Vilnius).

Besides, there is active cooperation in counteracting cybercrime. In particular, in August 2018 Ukrainian law enforcement agencies detained a group of Ukrainian citizens on suspicion of involvement in the hacking group Fin7. The victims of hackers of this organization have become more than 100 American companies.

Common security in the global cyberspace

And in conclusion, I would like to raise one more question. I have already said that wars in cyberspace can be compared with the use of weapons of mass destruction and threaten the whole mankind. 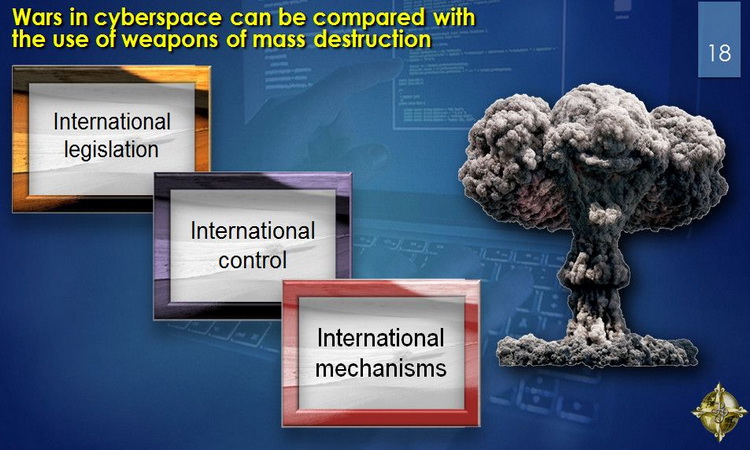 In view of this, the urgent need is to achieve international agreements on the rules of conduct in cyberspace, including:

The initiator of this issue could be the North Atlantic Alliance, which has international reputation. In this regard, it would be important for NATO and the Alliance’s partners to have a clear common position to support the rules of responsible behavior of all countries in cyberspace and measures for building confidence in the cyber sphere.

NATO’s putting forward such initiatives will let the Alliance strengthen its role and importance in resolving the problems in maintaining international cyber security and prevent Russia’s gaining an edge in this sphere. At the same time, dialogue with Moscow on the above-mentioned issues may also be established.

In particular, during the 73rd Session of the General Assembly of the United Nations in the second half of September 2018, Russia is planning to submit two draft resolutions on cyber security, namely:

Both the documents provide for a ban on the use of information and computer technology to interfere with internal affairs of other states in order to undermine their political, economic and social stability. At the same time, their initiation by Russia, in fact, aims to cover its own actions to influence other countries through computer networks. Today, this issue is of particular relevance to Moscow because of the US sanctions imposed against it for interference with American elections.

Of course, the above-mentioned suggestions are conceptual in nature and at this stage are only subject to discussion to determine prospects. At this, their practical implementation will require resolving a number of complex political, legislative, technical and financial problems both at NATO’s general level and at the national level of the Alliance’s partners.

In particular, Ukraine will face the necessity of creating qualitatively new forces of cyber warfare, including cyber troops or cyber command, which already exist in other countries. In turn, this will require appropriate political decisions of the leadership of Ukraine, allocation of necessary funds, training of professionals, etc.

At the same time, the experience of cooperation between Ukraine and NATO testifies to the possibility of successful implementation of such plans that will be of mutual benefit.