Strategy of Effective Removal of Putin

Rogovik A., coordinator of the Free Voice IAC 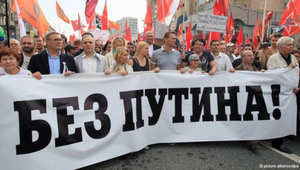 The most effective strategy against Putin’s aggression — is a strategy to “remove” Putin by helping him lose power in Russia. And here I mean precisely political removal or self-removal from office. But then Russia without Putin for Ukraine is only a chance, not a guarantee. The chance for a peaceful co-existence and development.

‘Removal of Putin” could be carried out in two steps. The first step he has made himself, having occupied and annexed the Crimea, as well as having unleashed aggression in the East of Ukraine. The second step has to be made by the world — namely, to oppose Putin’s aggression and to move to an effective “offensive”.

What are the tools to “remove Putin”?

– Strengthening and expansion of economic sanctions (extension of sectoral sanctions in the spheres of energy, finance, access to investments and technologies against the leading Russian companies and their subsidiaries; shutting Russia out of the SWIFT system; increasing the use of the so-called “Chinese banks joining the sanctions” at the expense of other countries and regions of the world; deepening of the sanctions against the Crimea;

– Achieving an international agreement between the Western countries and OPEC on the issue of long-term preservation of the era of “cheap oil” at the level of less than 30 US dollars;

– International counteracting to Gazprom’s energy projects, namely: putting pressure on its European contracts by means of inspections, legal actions (for example, by the Italian Saipem and the Polish PGNiG) and antimonopoly investigations (by EU bodies); complete replacement of the supplies of energy resources from Russia with alternative sources of resources and their delivery from the USA and the Middle East; opposing the projects “North Stream-2” and “South Stream”, “Poseidon” and others;

– Strengthening of economic competition and the policy of “removal of Putin” on foreign and Russian energy contracts (especially — with Asian, Middle Eastern partners and BRICS partners).

2. International counteracting the Kremlin’s propaganda, including:

– Implementation of the EU and NATO‘smechanisms to oppose the Kremlin’s propaganda based on the Strategy to counteract hybrid threats; single EU’s media policy and activities of NATO Strategic Communications Centre of Excellence;

– Development and implementation of mechanisms of “Internet” and “media breakthrough” into the Russian information space and high-quality pro-European propaganda in Russia (in particular, thanks to “pro-European Russians” in Europe and in the world);

– Strengthening of Putin’s negative image through greater attention to corruption and criminal scandals (Alexandr Litvinenko’s case, statements by the US authorities on Putin and his family’s corruption, the German documentary “Man in Power — Putin. Europe’s Opponent or a Partner”), and through his aggressive and inhumane policy in Georgia, Ukraine, Syria and so on.

– Political pressure on Russia within the framework of international negotiations, meetings and forums (using the G7’s practice against Russia); “Anti-Putin” consolidation of bilateral meetings with the “partners” of the Russian Federation and with Russia’s “new” competitors (for example, with Turkey) and its isolation;

– Modeling a political split and destabilization of the close to Putin political and economic elites; tightening of international sanctions against individuals from Putin’s environment and their enterprises, including by strengthening the policy of arresting Putin’s team’s property/assets/holdings abroad;

4. International containment in the security sphere:

– Limiting Russia’s access to new military technologies, materials and systems by complete restriction of military-technical cooperation at the level of states and international organizations; strengthening of sanctions against the defence sector (for example, as it was done against the “Kalashnikov” group);

– Intensification of the reaction to counter military threats from Russia (countering its air, land and underwater military activity).

– Initiation of international court proceedings and investigations within the framework of the International Criminal Court, the European Court of Human Rights, the International Tribunal for the Law of the Sea, consideration of individual issues on the UN Security Council, the Council of Europe’s meetings (especially in PACE), the OSCE, NATO, the WTO;

– Filing lawsuits against Russia in the International Court of Justice on: financing of terrorism; tortures and other cruel, inhuman or humiliating treatment or punishment; racial discrimination; Terrorist Bombing in 1997; Civil Aviation (shooting down the MH-17). Besides, the use of leverage of advisory ICJ mechanisms by voting at the UN General Assembly;

– Providing support for other claims against Russia at the Permanent Arbitration/Third Party Arbitration Court in The Hague and in other arbitrations, particularly in the “gas dispute” (in Stockholm) and the “debt dispute” (in London).

This way, Putin may self-remove from office or his own people will “go” against him. Both options provide for “special” international and national conditions. Such conditions can be achieved only when the international community’s policy to “remove the source of aggression” is systematic and consolidated. The proposed plan is not a hundred percent guarantee, but it can be considered an important factor in creating prerequisites for “removal of Putin”.