The editorial board of the Independent Analytical Center for Geopolitical Studies Borysfen Intel summed up the results of the contest for students, graduate students, young academics “The Ukrainian Dimension in Modern Geopolitics”, starting on April 2015.

First of all, we are pleased to announce that the contest did take place.  In total 43 works were submitted, of which 9 by the decision of the Editorial Board have been published  on the website of the Center. We can’t help pointing out  the geography of the contest, because works were sent not only by students and graduates of Kyiv universities, but also from  Universities  in such cities as Ternopil, Chernivtsi, Lviv, Odesa. At the end of each month, we summed up the results and named the winners who received awards from the Borysfen Intel Center.

So, by a unanimous decision of the Editorial Board of the Center, the winner has become  a student of Kyiv Shevchenko  National State University (Institute of International Relations) Nadia Serbenko. 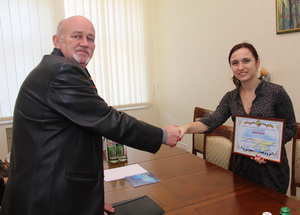 The Editorial Board has recognized substantive all her works posted  on the website of the Borysfen Intel: “AUTONOMOUS WEAPONS SYSTEMS: Unresolved Questions of Ethics, Morals, International Law and Geopolitics”; “On the Use of the Kerch Strait, or Why the Russian-Ukrainian Agreement Violates International Law?”; “On the Need to Understand the Legal Nature of the European Union as a Supranational Organization”.

Award winners of the contest are also citizens of Lviv Oleksiy  Rohovyk and Alla Yablonska for the work “New Chinese Dragons”: a Global Economic Alternative Is Being Born” and Oleksandr Cheban from Odesa for the  work  “The Nuclear Deal with Iran: Geopolitical and Strategic Consequences for Ukraine”. 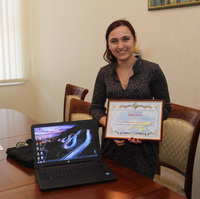 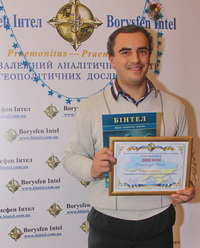 Thus, the main prize — a compact laptop  with installed licensed software, and a diploma of the winner today in the office  of  the Borysfen Intel Center were given to  Nadia Serbenko. The prize was given  by the Vice-President of the Center Yuriy Radkovets. Winners of the contest Oleksiy  Rohovyk, Alla Yablonska and Oleksandr  Cheban have been awarded each  a diploma  of the winner and cash prizes.

We sincerely congratulate the winner, award winners and all participants,  at the same time hoping that the creative dialogue with our young colleagues does not end here. After all, the Center is planning new contests  in the new, 2016, about which we’ll  announce at the end of January 2016.