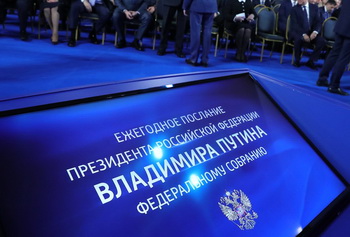 Twenty years ago, in early 2000, V. Putin came to power in Russia. All these years he stayed in it in one form or another, as a de facto sole ruler of the country. As the end of Putin’s fourth constitutionally-mandated term of office is approaching (ends in 2024), the question of maintaining his power is rising again.

On the pages of our website we have already considered possible options for the Russian ruling elite to resolve the aforementioned problem. Apparently, the Kremlin has finally made its choice and taken practical steps to implement it. Such steps are quite obvious and are already being analyzed by experts. However, let’s look at them again in the context of the current situation in Russia.

In particular, this concerns V. Putin’s initiative to amend the Constitution of Russia, which he put forward in the annual Address to the Federal Assembly of the country. The most important of these are the suggestions regarding:

According to Russian experts, inclusion of these suggestions into the Constitution of Russia will allow a formal transit of power in the country that will actually remain in Putin’s hands. The three most likely scenarios are assumed, namely:

The choice of one of these scenarios or the implementation of another option will depend on the specific situation in Russia over the next four years. In this regard, indicative are the content of V. Putin’s Address to the Federal Assembly of the RF on the 15th of January 2020 and the events that followed it. On the one hand, they confirm that the West’s sanctions against Russia do work, making the Russian authorities to adjust their policy. On the other hand, they show the Kremlin’s intentions to maintain its position in the country.

For example, the main subject of V. Putin’s speech was to demonstrate the Russian authorities’ “caring about” the population of the country in terms of concentrating efforts on overcoming most pressing socio-economic problems. At this, as always, the successes in the work of the Government of Russia were exaggerated, its failures were hidden, and a lot was promised in the social sphere.

However, unlike in previous years, the President of the RF abandoned the aggressive rhetoric against the West and expressed only intentions to further strengthen the national security of the country. Quite illustrative was V. Putin’s recognition of the Russian population’s desire for changes in the country.

All this confirms the Kremlin’s trend to shift its emphasis, which is a consequence of the negative influence of Western sanctions on Russia. Contrary to the Russian leadership’s words about the country’s adapting to external pressure, the latter continues to undermine Russia’s economy. The result is the transformation of the sentiments of the Russian population, as shown by the results of sociological research in the Russian Federation.

Thus, as of the end of 2019, the level of support for the Russian government’s activity has fallen to 44 %, and the share of those who disapprove of it has increased to 54 %. At this, the indicator of distrust of the Prime Minister has increased to 54 %, and to the President — to 30 %. At the same time, 70 % of those polled stand for change in Russia’s foreign and domestic policies, including ending the confrontation with the West and the conflict with Ukraine.

Given the Russian leadership’s being unable to improve the situation in the country, these processes are becoming stable and threaten the stability of the Putin regime. In particular, manifestation of such threats is the ruling United Russia party’s losing local elections in a number of regions of the country. Moreover, the use by the Russian authorities of an administrative resource to hold their positions leads only to a further decline of its authority.

In general, the above-mentioned circumstances make Moscow change its policy, or at least demonstrate such changes. One of such demonstrations was the resignation of the Russian government, headed by D. Medvedev, whose role was to be responsible for all the socio-economic problems in the country. Especially, as this is considered by the majority of the Russian population, which allows to take real responsibility for the situation from Putin himself.

At the same time, due to the transfer of D. Medvedev to the post of Deputy Chairman of the Security Council of the Russian Federation, conditions have been created for the implementation of another variant of keeping Putin in power after 2024. Under this scenario, Putin may remain in the post of Chairman of the Security Council of Russia, along with a significant increase in the status and powers of the said body. In this case, D. Medvedev as Putin’s man will become his mainstay in the new configuration of the RF Security Council.

Putin’s having chosen M. Mishustin as the new head of the Russian government was obviously purposeful. Thus, according to experts, he embodies in the eyes of Putin an effective technocratic bureaucracy without political ambitions, which precludes any possibility of his getting out of the Kremlin’s control. At the same time, M. Mishustin has considerable experience of fiscal activity that can be used by him to secure state budget revenues. Including in implementing social programs announced by V. Putin, which require spending in the amount of about 500 billion rubles per year.

In turn, a demonstration of the Kremlin’s new approaches in the foreign sphere was Putin’s giving up open and aggressive threats against the USA and Europe, and, instead, focusing on a willingness to seek compromise and cooperate with them. In doing so, the Kremlin is trying to get Western sanctions lifted from Russia, or at least to avoid imposing new restrictions on it.

At the same time, Moscow’s real goals, including for Ukraine, remain unchanged. In particular, this was shown by V. Putin’s summing up interview at the end of 2019, in which he confirmed Russia’s claims to territories of former Soviet republics. Moreover, Moscow continues to make consistent efforts to put such claims into practice.

This is exactly what the Kremlin is aiming at imposing the Russian version of the Minsk Agreements within the framework of the so-called Steinmeier formula. As we have repeatedly pointed out in our publications, Moscow is trying to create conditions for disintegration of Ukraine as a single state under the guise of its federalization and to restore Russian control over it.

Thus, the end of Putin’s presidential term in 2024 will in no way mean a real change of power in Russia and its policy on the Ukrainian direction. Moscow will not stop aggression against Ukraine until it fully achieves its goals against our country, or gets critical aggravation of internal problems in the RF due to Western sanctions.