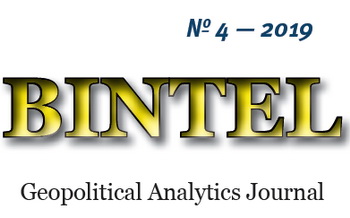 The latest issue of the “Bintel” Geopolitical Analytics Journal, published in 2019, continues the tradition of summarizing global events that this way or other have to do with Ukraine, its geopolitical partners and opponents. This time, the article by President of the “Borysfen Intel” Center Victor Hvozd “Ukraine and the World: Geopolitical Results of 2019” is extended to cover almost all major events, including those related not only to Europe, but also to the Middle and Far East, North Americas, etc. The only thing that combines its content with the articles of previous years is the events in the Ukrainian state, the list of threats that are already emerging or will arise, hampering its historical progress, and specific conclusions that should be taken into consideration, in order to avoid unnecessary shocks or economic and political losses. Looking through the journal, the reader will find a lot of interesting facts, in particular those explaining the RF’s true intentions towards Ukraine, revealing the basis of the EU’s suggestions for resolving war-related problems in the East of our country, forecasting consequences of the political steps of “Normandy Four”, warning of premature conclusions about the recent meeting of its representatives in Paris, which may be imposed on our society. 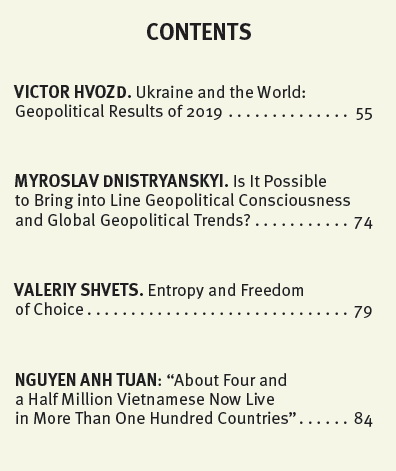 Having outlined in the introduction to the article the problems that Ukraine is facing, V. Hvozd presents his vision of our state’s role and place in the modern multipolar system of world order, pointing out the important trends that increase the tension both around Ukraine and within its society. The author draws attention to the fact that Ukraine is in the positions where the interests of the West and Russia intersect and “on the way of resolving the Ukrainian issue will depend whether the United States can stop Russia’s expansion and prevent it from reaching the level of the former USSR”. Otherwise, it will become the world’s new center of power. This is what determines the policy of the West’s support for Ukraine. How exactly to prevent such efforts of Russia, the author of the article explains in the section — “Partners and Opponents. The Main Aspects of the Activity of the Leading Countries of the World and International Organizations, Regarding the Interests of Ukraine”. As we know, these states first of all are the United States and the members of the European Union, whose influence, despite the emergence of new centers of power, is most noticeable. But while the USA’s political decisions in 2019 were mostly not only tangible but logical, the EU’s decisions could not always be called such. The author also points out that during the year the situation in the EU was complicated by external and internal factors, such as negative aspects of the USA and China’s policies on the European direction.

The author deeply analysis NATO’s activities, whose Allied Chiefs of Defence signed (May 2019, Brussels) the new Military Strategy that addresses threats to European and Euro-Atlantic security. The following are identified as major threats: in the East — Russia; in the South — Islamic terrorism; globally — China. In view of this, the document envisages building up the Alliance’s military strength at the global level, improving Europe’s defense capability and increasing counteraction to the spread of terrorism and extremism from North Africa, the Near and Middle East. The author of the article also mentions that, for the first time since the founding of the North Atlantic Treaty Organization, the NATO Joint Air Power (JAP) Strategy was developed. The document stresses the importance of the JAP as one of the Alliance’s core military capabilities. The author also writes about the adoption of a new comprehensive NATO Space Policy that defines the Alliance’s defense and deterrence activities in space.

Describing in detail in a separate section Russia’s active and aggressive external expansion, V. Hvozd draws attention to a series of programmatic speeches and documents of the Russian leaders in 2019. Among them — the address of the RF President to the Federal Assembly in February 2019, V. Putin’s direct line in June 2019, the Assistant to the RF President, author of the concept of “sovereign democracy” V. Surkov’s article “Putin’s Long State”. Special attention is paid to the process of pursuing Russia’s interests in post-Soviet territories, first of all deepening ties with Belarus and other partners in the Eurasian Economic Union (EAEC) and the Collective Security Treaty Organization (CSTO). V. Hvozd draws attention to the creation of a “road map” for further integration of the RF and Belarus to the level of a confederation, and then — a federation. According to the author of the article, such an integration process is particularly important for the Kremlin as one of the options for creating conditions for preserving Putin’s power after 2024 (ending his second presidential term in the new cadence) by amending the Russian Constitution.

Equally interesting in the article may be information about the state of the Russian economy and the measures by which Russia tried to prevent its decline. In 2019, Russia’s GDP growth rate dropped from 2 % to about 1 %, exacerbating the country’s social problems. According to Rosstat, 18.6 million of Russian population now live below the poverty line. That is why 70 % of those polled wanted changes in Russia’s foreign and domestic policies. They also spoke for ending the confrontation with the West and the military conflict with Ukraine.

Those of readers who follow the military-strategic situation around our country can find meaningful explanations for this in a separate section of the article under almost the same heading. In particular, to find out about the military forces that Russia has deployed on its western (and therefore Ukrainian eastern) borders, about strengthening of NATO’s military presence in Central and Eastern Europe (i.e. in front of Ukrainian western borders) and on the Baltic and Black Sea directions (our South and practically North). This section also describes in detail the preparation of the parties for possible hostilities and the tactics used by their military in the event of armed confrontation. Thus, the military forces of the West were being built up from the Baltic to the Black Sea, their list and number were given by the author of the article with accuracy almost to the battalion.

And the whole text is accompanied by original illustrations that help to understand the content of the research.

Myroslav Dnistryanskyi‘s article “Is It Possible to Bring into Line Geopolitical Consciousness and Global Geopolitical Trends?” touches upon the formation of the global geopolitical world order. The author draws attention to the fact that a great deal of geopolitical interests are determined by subjective goals, that is, by geopolitical consciousness, based on the system of values, ideological, moral, and cultural priorities of any individual or society as a whole, and that this consciousness is formed first of all by political leaders, elites, intellectuals, gradually “extending their ideas to the general public”.

Briefly, but thoroughly analyzing the historical aspects of the development of geopolitics over several centuries and mentioning the work of such analysts as H. Mackinder and K. Haushofer, the author mentions, apart from ancient, specific types of geopolitical consciousness of current times: religious-state, religious-supranational, pan-regional, and globalist. And he makes sound conclusions as to what modern geopolitics depends on, how and why it has been changing lately, which of its models can be considered to be true, and which, in his view, are unscientific, and what the basis for such a statement is. By the way, the author confirms his references with the examples from the present, which will convince even the most skeptical reader or opponent. However, he points out that “these are just some approaches to understanding global geopolitical trends and patterns. It is high time to form and justify in the objective geopolitical analytics a holistic system of regular relations in the geopolitical world order, which can be achieved only as a result of a full-scale analysis of the totality of political-geographical, socio-, economic-geographical and demogeographical processes, and studying geopolitical situation in regions and countries of the world. But even more important is this question: to what extent in practical geopolitical thinking will be taken into consideration the known and substantiated objective geopolitical patterns in order to balance inter-state relations and ensure conflict-free geopolitical development?”

And here the reader, as they say, knows the ropes, and can compare some scientific conclusions from the article with the present practice, including the current Ukrainian. And helpful in this can be another article — “Entropy and Freedom of Choice” by Doctor of Physical and Mathematical Sciences Valeriy Shvets, which seems to continue the “mathematical” theme of social and political life of the society raised by him in the “BINTEL”’s previous issue. The author does not just seek to formulate a formula for finding out the public opinion. He suggests using this formula to compare, so to speak, its tone, stating that “tunes” (i.e. the level of freedom of choice) in societies such as Ukrainian and Russian cannot be the same for many reasons and aspects. “The level of election freedom is the level of real power of the people. Power potential is the real power of the winner. If the winner forgets about the limits of his power, then people’s unrest with tragic consequences for the usurper are inevitable”, — writes V. Shvets in his article and supports his conclusions with facts from the Ukrainian history.

And in order to draw more attention to the content of this work, it is worth mentioning its final paragraph: “The mere possibility of noticing and analyzing the smallest details of both the presidential and parliamentary elections in both countries (Ukraine and Russia — O.M.) at the level of numbers demonstrates, in our view, that the formulas proposed by the author for quantitative analysis of elections are an effective tool for quantitative study of such a political process. We believe that this approach can be applied to quantitative analysis of other aspects of our country’s political life”.

As for our traditional column “Visiting BINTEL”, this time the Ambassador Extraordinary and Plenipotentiary of the Socialist Republic of Viet Nam to Ukraine Nguyen Anh Tuan agreed to the interview. He answered questions related mainly to Viet Nam’s cooperation with Ukraine in economics, culture, education, science, while explaining peculiarities of the current state legislation and telling about the plans for future bilateral cooperation.

Traditionally, we are presenting on the website a shortened version of the interview. All interested in it, and in the content of the journal articles, can purchase this issue through the “Borysfen Intel”’s website.

As in the previous issues of the journal, texts are printed in Ukrainian and English.