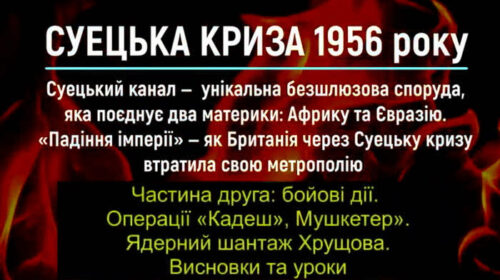 Lessons from the Suez Crisis

“Collapse of the Empire” — how Great Britain lost its metropolis due to the Suez Crisis. The 1956 events around the Suez Canal.

Part two. Fighting. Operations « Kadesh» and «Musketeer». Israeli assault, bombing of Port Said, capture of the Suez Canal, the USA against the use of force. Khrushchev’s nuclear blackmail, the R-5 missile, and the Tu-4 and Tu-16 bombers with nuclear weapons. UN Peacekeeping Force in the Middle East in 1956. Gamal Abdel Nasser — a hero of the Soviet Union. Lessons from the Suez Crisis.

Victor Hvozd, Head of the Foreign Intelligence Service of Ukraine in 2014–2016, President of the Independent Analytical Center for Geopolitical Studies “Borysfen Intel”, Doctor of Military Sciences in an interview with ICTV on 21st March 2021.

The second part of this story (on YouTube, in Ukrainian).