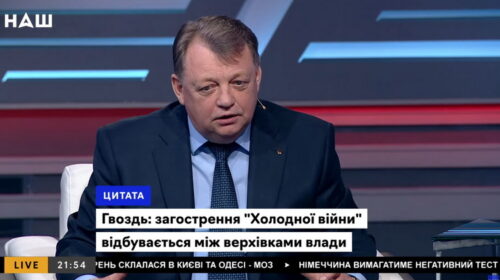 Victor Hvozd in the studio of NASH TV channel

Quite logical could be called the step to create/restore the format of the discussion, which worked on one of Ukrainian TV channels, where experienced Ukrainian politicians have the opportunity not only to present their vision of the political situation, but also to debate. As a result — the TV audience gets an unbiased picture of modern life. At least, everyone who listened to the speeches of the experts in geopolitics, economics and military affairs invited to the analytical talk show “Karasyov’s Black Square” on the NASH TV channel will agree with this. This time Victor Hvozd, President of the Independent Analytical Center for Geopolitical Studies “Borysfen Intel”, spoke with other guests in the studio.

As a former diplomat, former head of the Foreign Intelligence Service of Ukraine (2014–2016), Doctor of Military Sciences, explained current geopolitical events and their impact on Ukrainian politics, the actions of the Ukrainian leadership, which now has to defend our state positions in several spheres of confrontation: political, economic and military. By the way, regardless of how burning was the range of issues or topics of speeches of the present at the “Square”, the opinions of two senior officers — Victor Hvozd and Oleksandr Kikhtenko (ex-Commander of the Internal Troops of the Ministry of Internal Affairs of Ukraine) specifically related to those events a society whose bravest representatives now have with arm in hands to “correct mistakes”, of Ukrainian diplomacy included.