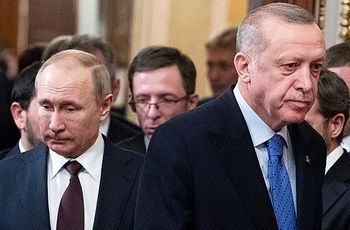 Repetition of the Syrian Scenario

Currently, in Libya, as in Syria, Turkey and Russia have been playing a leading role. They support the confronting parties in those countries, defending their own geopolitical goals, opposing each other, which sometimes results in direct armed clashes between them. At this, while in Syria there is a certain hybrid and formal coordination of actions between the Turkey and Russia, in Libya, there is none, because Turkey’s influence in this country far exceeds Russia’s. The insurmountable disagreements between Ankara and Moscow over the future status of Syria and Libya leaves little reason to believe that R. Erdogan and V. Putin will ever overcome them.

Libya for V. Putin today is as closely associated with his prestige and formation of Russia’s image of a “great power” as Syria, Georgia, Crimea and the Donbas. Instead of really raising the standard of living of Russians, V. Putin is relying on adventures outside Russia. And he is not stopped in this by the difficult economic situation inside the country, or the fatigue of the Russians from the aggressive foreign policy of the Kremlin, the only “achievements” of which are new international sanctions and Russia’s increased isolation. The Mediterranean direction of Putin’s military expansion is one of the main elements of the Kremlin’s military-political confrontation with NATO countries, and in this confrontation V. Putin tries to rely on Turkey, dreaming if not of separating it from the North Atlantic Alliance, then at least of keeping it at some distance from it.

In the nearest future, Ankara and Moscow are likely to remain key external actors influencing the military-political situation in Libya, while continuing to camouflage their rivalry with declarations of partnership and initiatives to resolve the Libyan crisis peacefully. Most probably, their efforts will end in freezing the conflict, preservation of dual power in the country, which will allow approximately equal distribution of revenues from the sale of hydrocarbons and continuation of a sluggish and ostensible peace process by officials in Tripoli and Tobruk as a cover for their real intentions to take control of the whole Libya.