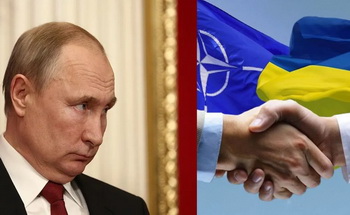 For a long time, international analysts had focused primarily on Asia. Virtually every island and islet in the South China Sea caused their great interest. This does not apply to the dangerous zone of fault, which stretches in Europe from the Baltic states to the Black Sea. But Putin has radically changed that by concentrating Russian troops near the Ukrainian border, for which he can even be “thanked”. Russia’s current demonstration of force has shattered the illusion of stagnation and stability. As always, when the West’s self-deception confronts reality, there is growing anxiety and concern and, as always, the other side, in this case Putin, is trying to shift responsibility for the crisis to the adversary.

Europeans underestimated the military power in the hands of a man who has long considered himself Vladimir the Great. Although Russia’s armed forces cannot match the size of NATO’s armies, they have two advantages. They can raise tensions in the geopolitical situation or even strike anywhere between the Baltic and Black Seas.

In addition, Putin does not hesitate to use his resources when he has reasonable hopes of achieving an advantage. However, some NATO members, most notably Germany, are reacting painfully to military pressure. The very idea of supplying weapons to Ukraine provokes a painful reaction from them. Everybody knows that the decisive role in a battle is often played not by more powerful battalions, but by more powerful will. But a strong will is not all.

Putin is unlikely to risk waging war and occupying further Ukrainian territories, although Ukraine is not Russia’s equivalent. Victims and losses can be too great. First of all, in this case, Ukraine would turn from an asset that the Kremlin is currently using at its discretion to create problems for the whole world, into a kind of millstone for Moscow. And here we can recall the disappointing consequences of the US mission in Afghanistan.

The West needs a new strategy for relations with Russia. During the Cold War, containment policy and diplomatic dialogue were used simultaneously. Negotiations without strong defense meant weakness, restraint without dialogue meant adventurism. NATO noted this in the late stages of the confrontation with Russia, as soon as talks were held with Moscow in Geneva, Brussels and Vienna.

An essential precondition is that Russia cannot be allowed to exercise control over any area of interest of the former Soviet republics. But this is exactly what is happening in Belarus, the Caucasus and Kazakhstan. Since the situation in Ukraine is different, one can only wonder why NATO does not make it a member of the Alliance, like the Baltic states.