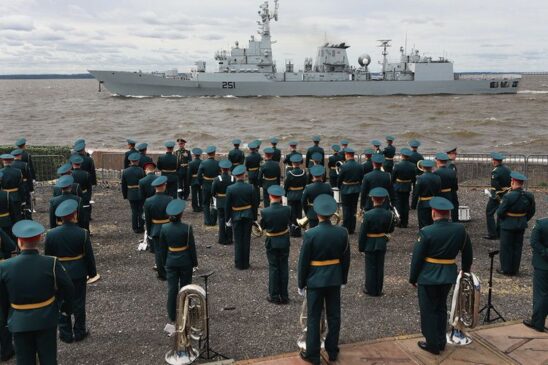 July 31, 2022, Naval parades dedicated to the Navy Day were held in Russia. It would seem that there is nothing special about it, and why pay attention to them, especially during the war? They deserve attention, as they are an element of Russia’s neo-imperialist policy directed against Ukraine. By demonstrating Russia’s “military power”, the Kremlin is trying to intimidate anyone it considers Russia’s opponents and boost the spirit of the Russian population. However, today military and naval parades in Russia primarily demonstrate its weakness, not its strength. Let’s prove it with several examples.

At first glance, the topic of military parades in Russia is quite far from the interests of Ukraine. This is not true at all. The nature and scope of such measures fully reflect Russia’s policy, including its attitude to our state. Let’s analyze the mentioned issues in historical retrospect, which will allow us to better understand the topic.

For example, in the period after the Second World War, military parades in the former USSR were held twice a year, namely on May 9 — the Victory Day and on November 7 — the anniversary of the “Great October Socialist Revolution” (or the Bolshevik coup). After the collapse of the Soviet Union, the parades were stopped.

However, in 1995, the Russian authorities resumed military parades in honor of Victory Day, which was a consequence of the “flirting” of the then president of the country, B. Yeltsin, with the communist opposition. At the beginning, the parades were mainly conducted in the form of a march of veterans with relatively little involvement of the military.

With coming to power in Russia of V. Putin, who started the policy of restoring the “great Russian state” and confrontation with the West, the parades on May 9 began to take on an increasingly large scale. This was facilitated by the Kremlin’s use of the theme of the victory of the USSR in the war with Hitler’s Germany as a factor in the consolidation of the Russian population.

Since the mid-2010s, after Moscow’s first attack on Ukraine and the de facto start of a new Cold War between Russia and the West, May 9 military parades have approached the level of those held in the former USSR. In this way, the Kremlin tried to exert pressure on the USA and Europe and demonstrated readiness to use armed force to implement its interests. At the same time, the great-power moods of the Russian society were growing, as a basis for their approval of Russia’s aggression against Ukraine and the policy of confrontation with the West.

Interestingly, the nature of the Victory Day celebration in the Russian Federation, as well as the holding of military parades in most of the country’s major cities, acquired complete identity with Nazi actions in Hitler’s Germany in the 1930s. Their common features were mass hysteria under the slogans of revanchism, expansionism and superiority of own nation/country over all others, the deification of their leaders and denigration of others, as well as calls for destruction of enemies, which were supported by militaristic shows.

All this happened on May 9, 2022 with a number of features that were related to the nature of the current situation. First of all, they related to the emphasis of the festive events on increasing the level of support of the Russian population for the now full-scale war against Ukraine under the slogans of “the fight against Nazism, fascism and nationalism”, as well as “Russia’s victory as a must”. In this way, the failure of the Russian “blitzkrieg” was masked and the negative effect of the high military losses of the Russian troops in Ukraine was smoothed out.

However, due to the involvement of most units of the Russian Armed Forces in the war in Ukraine, military parades in Moscow and other Russian cities were much smaller in scale than in previous years. The lack of soldiers was compensated by the personnel of the police, fire and rescue units, prison guards, as well as members of various Cossack, youth and other paramilitary organizations. In addition, the number of participants in the marches of the so-called “Immortal Regiment” with portraits of those killed during the “Great Patriotic War” and during the “special operation” in Ukraine was increased to the maximum.

The same can be said about the naval parades dedicated to the Day of the Russian Navy on July 31. Currently, they correspond to the greatest extent to the above-mentioned trends and today’s situation. Therefore, let’s analyze them in more detail.

To begin with, the main naval parade was held in the waters of the Neva River in St. Petersburg. In total, about 40 warships, boats and auxiliary vessels were involved in it, including the frigate (missile ship) “Admiral of the Fleet of the Soviet Union Gorshkov”, the large landing ship “Minsk” from the Baltic Fleet; the large landing ship “Ivan Gren” and the submarine “Saint Petersburg” from the Northern Fleet; frigate “Admiral Makarov” from the Black Sea Fleet; a small missile ship “Great Ustyug” from the Caspian Flotilla. In the evening, several dozen planes and helicopters of various types flew over the city.

Naval parades were also held in the waters of the bases of the Northern Fleet (Severomorsk), the Baltic Fleet (Baltiysk), the Black Sea Fleet (Novorossiysk), the Pacific Fleet (Vladivostok) and the Caspian Flotilla (Kaspiysk), and also in some other Russian cities, including on rivers in the hinterland of Russia.

In particular, more than 30 warships, boats and vessels of the Black Sea Fleet, as well as four large landing ships of the Northern Fleet, took part in the parade at the Novorossiysk Naval Base, which is the most interesting for us from the point of view of the RF Black Sea Fleet’s participation in the war against Ukraine.

As expected, the parades were held under the “trends” of Russia’s war against Ukraine and Russia’s confrontation with the West. At this, Moscow propagandists tried to persuade the public of the “power and invincibility” of the Russian fleet, which supposedly “superiors” the US and NATO fleets. In support of such maxims, various “evidences” were cited, which were a mixture of more or less reliable facts and outright fakes.

Evidence of the “superiority” of the Russian Navy was its having the world’s largest nuclear submarines. At the same time, no one mentioned that they are the “largest” only because Russian designers could not make them smaller. Therefore, these submarines are more vulnerable to the enemy.

In a euphoric tone, it was reported about Russia’s serial production of new Severodvinsk Project 885 nuclear submarines, equipped with long-range Kalibr missiles, Oniks supersonic anti-ship missiles, and, in the future, Zircon hypersonic missiles. And again, no one mentioned that the US Navy has long had much better submarines in service.

The actions of the Russian Navy during various military exercises and maritime patrols were praised. The fantasies of Russian propagandists simply knew no limits. According to one of the fables, in 2015, two Russian diesel submarines “frightened the American aircraft carrier USS Theodore Roosevelt and drove it into one of the British bases”.

In addition, Russia does not have its own aircraft carriers at all, unlike its opponents (the USA, the UK, France, Italy and Japan). The only one similar to them — the aircraft cruiser “Admiral Kuznetsov” — was irreversibly damaged back in 2018 in Murmansk due to the fall of a tower crane and the sinking of the dock where it was being repaired.

The mentioned incident confirmed non-existence of any prospects in the development of the Russian Navy due to the degradation of its shipbuilding industry, which has lost the ability to build ships bigger than a frigate, and due to Western sanctions will never reach it. Therefore, the Russian Navy will continue to be incomparably weaker than the navies of Russia’s adversaries.

What it cost the Black Sea Fleet, we did write in previous publications. Let us remind that at least three frigates of the Black Sea Fleet, including “Admiral Makarov”, were destroyed or damaged in March 2022. In the most difficult period of the war for Ukraine, the large landing ship “Saratov” was destroyed by a Tochka-U ballistic missile in the Russian-occupied city of Berdyansk. And along with it, the large landing ship “Orsk” and “Novocherkassk” were damaged, which disrupted the possibility of conducting amphibious operations and ensuring the logistics of Russian troops in the Azov region.

In April 2022, the flagship of the Russian Black Sea Fleet, the cruiser “Moskva”, was destroyed by the Ukrainian anti-ship complex “Neptune”, which led to the disruption of the entire control, communication and air defense system of the Black Sea Fleet in the maritime zone. As a result, Russia was forced to withdraw its warships to a safe (for now!) distance from the coast of Ukraine.

The logistics system of the Russian Navy in the Black Sea was also disrupted. In May 2022, the newest supply ship of the Black Sea Fleet “Vsevolod Bobrov” was drowned near Zmiinyi Island, and in June 2022 — the rescue tug “Vasily Bekh” went to the bottom of the sea. As a result of this, as well as the constant attacks of the Ukrainian Armed Forces on Zmiinyi Island, the Russian occupiers left it, calling it a “gesture of goodwill”.

During the fighting in the south of Ukraine, two sets of personnel of the 810th Marine Brigade and the 126th Coastal Defense Brigade of the Black Sea Fleet were destroyed, along with their command.

Someone may ask, what is the point of naval parades in Russia? They are directly related to this. First of all, taking into account the above circumstances, the Russian Navy, especially the Black Sea Fleet, has nothing to celebrate. Instead, funeral prayer services should be ordered for it. Secondly, Russia has finally admitted that it is afraid of Ukraine. That is why the naval parade in Sevastopol was canceled and moved to Novorossiysk.

By the way, we already wrote about the fact that frigate “Admiral Makarov” of the Black Sea Fleet took part in the naval parade in St. Petersburg. Where do you think it came from? We’ll tell you. In March 2022, it was damaged by the coastal artillery of Ukraine. After Russia’s unsuccessful attempts to repair the ship in Sevastopol, in May-June 2022, the ship was towed by tugboats across sea and river routes within Russia to the “Northern Shipyard” in St. Petersburg. There, the damaged frigate was involved in the festive events in order to give the naval parade a wider “coverage” due to the absence of other warships.

And one more question: where did the four large landing ships of the Northern Fleet of the Russian Federation come from to the parade in Novorossiysk? Back in February 2022, they moved to the Black Sea to strengthen the Black Sea Fleet in the war against Ukraine. After Turkey closed the Bosphorus and Dardanelles for the passage of Russian warships, they were “stuck” in the Black Sea, and now they can only participate in “festive events”.

At the end of the article, we would like to mention another parade planned by Russia in Kyiv after its capture by Russian troops. As you know, Moscow planned to do this three days after the start of the attack on Ukraine. That is why the Russian invaders even took with them a ceremonial dress uniform. The war has been going on for more than five months now, yet Kyiv and most of Ukraine still remain free. But the “last parade” in the form of funeral prayer services has already taken place for more than 40,000 Russian invaders. Let us hope that in the near future there will come the “last parade” for all the armed forces of Russia, including its army and navy.