The first edition of Victor Hvozd’s book was accepted with interest by the readership. The author, with knowledge of the matter, writes about modern Ukrainian military intelligence, about those of his colleagues who made extraordinary efforts in difficult geopolitical conditions to create it, selected the appropriate personnel who became the basis of the Main Intelligence Directorate of the Ministry of Defense of Ukraine.

From the book, one can also learn about the principles of reforming and improving the military intelligence structure, the directions of its activity both at the beginning of its formation, and on the eve or during Russia’s armed aggression against Ukraine in 2014–2021.

The readers were really interested in the first edition of the book, because in fact for the first time in such a substantial work, the author professionally tells about modern Ukrainian military intelligence, namely, about the geopolitical prerequisites for its creation as a system, about the beginning of its operation, about the formation and development of the Main Intelligence Directorate of the Ministry of Defense of Ukraine and its reformation and capacity-building, about improving its structure with the aim of intensifying activities and, what is extremely relevant, — about the Ukrainian military intelligence on the eve of and during Russia’s armed aggression against Ukraine in 2014-2021. 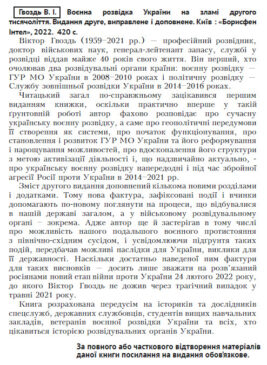 The content of the second edition has been supplemented with some new chapters and appendices.

Therefore, the new facts and events help to look at the processes that took place in our state in general, and in the military intelligence in particular, in a new way.

After all, the author also warned, among other things, about the possibility of our further military confrontation with the north-eastern neighbor, and being aware of the grounds for such an aggression, predicted possible consequences for Ukraine, challenges for its statehood.

To what extent the facts given by him are sufficient for such conclusions — it is enough to consider the new stage of the war against Ukraine launched by the Russians on February 24, 2022, which Victor Hvozd did not live to see due to the tragic accident in May 2021.

In the second edition of the book, which has just been published, there are some new chapters. The author worked on them last year, but did not have time to have them printed, which we, his colleagues, undertook to do. As noted in the introduction, the new facts in the book make it possible to take a new look at the processes taking place in our country in general, and in the military intelligence in particular.

From the preface for the second edition. May 2021

“It would seem that the first book was published not long ago. But time is running out quickly, political events in Ukraine and the geopolitical situation around it are developing even faster, and the course of events in the Joint Forces Operation zone continues. 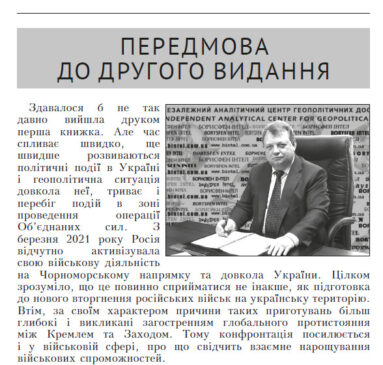 Since March 2021, Russia has significantly intensified its military activities in the Black Sea region and around Ukraine. It is quite clear that this should be perceived as preparation for a new invasion of Russian troops on Ukrainian territory.

However, the reasons for such preparations are deeper and are caused by the aggravation of the global confrontation between the Kremlin and the West. Therefore, the confrontation is intensifying in the military sphere as well, as evidenced by the mutual increase of military capabilities.

As predicted by the majority of political analysts, with the coming to power of J. Biden in the USA, changes in American politics have begun to take place, in particular, the attitude to Russia is becoming tougher. As a result, American-Russian relations are getting worse, and, accordingly, the Russian Federation is increasing its pressure on the United States and its allies and partners.

But then, this is just a continuation of the process of confrontation between Russia and the West, which was initiated by V. Putin back in 2007. Since then, both sides have been increasing their military activity in the main directions where their interests intersect, of course, around Ukraine included.

Thus, today it can be argued that Russia and the USA/NATO and Europe have resumed the Cold War, which will be accompanied by further confrontation between them in the military sphere. At this, most likely, the parties will try to be uncompromising regarding any issues strategic for them.

Ukraine will have to continue to be both at the intersection of interests and at the center of the confrontation between the West and Russia. Therefore, the military tensions around Ukraine will become tougher. For example, another increase in Russian military activity in the Ukrainian direction should be expected already this year, during the active phase of the strategic military exercises of Russia and the USA/NATO…

After all, the author did not reject the possibility of a further military confrontation with our north-eastern neighbor and, realizing the background of such events, predicted possible consequences for Ukraine, challenges for its statehood. To see to what extent the facts given by him are sufficient for such conclusions — just consider the new stage of the war against Ukraine launched by the Russians on February 24, 2022, which Victor Hvozd did not live to see due to the tragic accident in May 2021.

Preface to the Second Edition 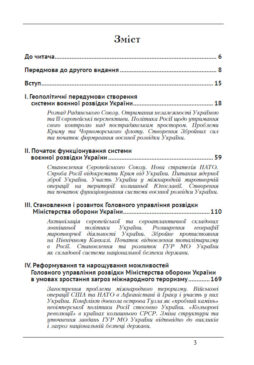 II. The beginning of the work of the military intelligence of Ukraine.
Formation of the European Union. NATO’s new strategy. Russia’s attempt to separate Crimea from Ukraine. The issue of Ukraine’s nuclear weapons. Ukraine’s participation in the international peacekeeping operation on the territory of the former Yugoslavia. Creation and start of functioning of the military intelligence of Ukraine. 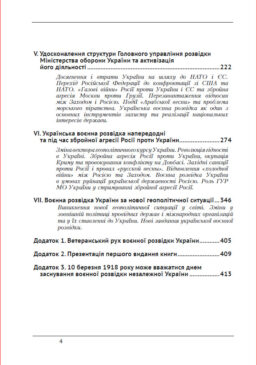 V. Improvement of the structure of the Main Intelligence Directorate of the Ministry of Defense of Ukraine and intensification of its activities.
Achievements and losses of Ukraine on the path to NATO and the EU. The Russian Federation’s policy of confrontation with the USA and NATO. Russia’s “gas wars” against Ukraine and the EU; Moscow’s armed aggression against Georgia. Resetting relations between the West and Russia. The events of the “Arab Spring” and the problem of maritime piracy. Ukrainian military intelligence as one of the main tools for the protection and implementation of the national interests of the state.

Appendix 3. March 10, 1918 can be considered the day of creation of the military intelligence of independent Ukraine.

Historians and researchers of special services, civil servants, students of higher educational institutions, veterans of military intelligence of Ukraine and everyone who is interested in the intelligence activities in Ukraine, and military intelligence in particular, will have the opportunity to get answers to many of their questions when they pick up the second, corrected and supplemented edition of the book “Ukraine’s Military Intelligence at the Turn of the Third Millennium”. 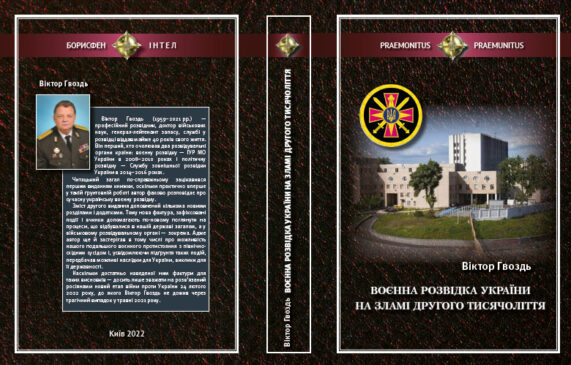