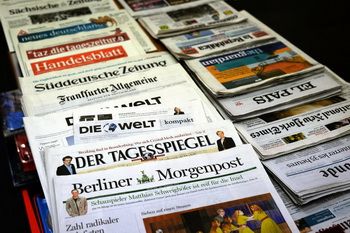 Stopping the construction of Nord Stream 2 would be a clear signal to V. Putin that such poisoning will inevitably have consequences

European media have been extremely negative about the events surrounding the poisoning of Russian opposition politician Aleksei Navalny. The Austrian Die Presse reports that the EU sees Moscow’s actions in poisoning A. Navalny as a violation of international law. And Berlin should consult with its allies on the conclusions. The Swiss newspaper Neue Zürcher Zeitung points out that opponents of the regime in Russia are being attacked with astonishing regularity. Outraged comments and articles sharply criticizing Russia’s actions regarding A. Navalny’s poisoning also appeared in the Austrian broadcaster ORF, the popular German-language daily Tagesschau, Tagesspiegel, the South-German Süddeutsche Zeitung, the Franffurter Allgemeine Zeitung, the Italian broadcaster RAI, the German RND and other respected European media.

…Finally, about the almost completed Nord Stream 2 gas pipeline in the Baltic Sea. Until now, Germany was supporting the project in the EU, and was not supporting the mass criticism from both the European Commission and counties of the Central and Eastern Europe. Although it is obvious that the pipeline first of all serves geopolitical purposes. In the medium term, it will allow Russia to bypass Ukraine when exporting Russian gas to Europe. For Ukraine, this means not only financial losses, but, above all, a worsening security situation: until now, Moscow depended on the uninterrupted gas transit through Ukraine. Now, in case of further destabilization of the situation or even escalation of the conflict, Ukraine will suffer enormous damage.

Early last week, Chancellor A. Merkel called for the completion of Nord Stream 2. If the federal government abandoned this project, it would be the clearest signal to the Kremlin, both economically and symbolically, that the attack on and poisoning of A. Navalny’s would not go unnoticed. Russia is not in a vacuum and must take into account the economic interests of its supporters. Thus, sanctions can change the balance of costs and benefits of the Kremlin in case of intentions to commit new acts of violence.