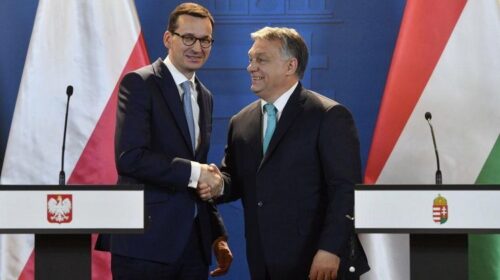 The Increasing Degree of Internal Confrontation in the European Union

The European society’s attention is drawn to the joint statement of the Prime Ministers of Hungary and Poland that they will not approve the budget of the European Union. For example, the German Berliner Zeitung has published a report on this “principled position of both countries”, which are part of the Visegrad Group and, as relatively new EU members, widely use its financial instruments and receive financial assistance from the consolidated budget to resolve their own national problems. Today, they have suddenly started threatening to block the adoption of the new seven-year EU budget. According to the newspaper, both Prime Ministers believe that the European Union is allegedly interfering in the internal affairs of their states, and this is beyond its competence.

This use of leverage by individual Western countries in decision-making within the European Union to their advantage shows that even financially dependent eastern countries of the European Union do not stop at the opportunity to apply pressure to achieve national aims. No allied commitment hinders the pursuit of a rigid policy of national selfishness and the attainment of goals in the interests of one’s own government or getting benefits for own state. Poland’s and Hungary’s geopolitical subjectivity, maturity of their institutions of government and traditional national selfishness allow these countries to disregard the views of other EU partners. Obviously, statements that contradict the general democratic trend in the EU are based on an accurate calculation of the consequences of countering EU norms, based on information available to governments and on the assessment of possible crisis scenarios.

Thus, we may conclude that factors such as the weakness of the EU and its dependence on global players — the United States and China, as well as Russia, allow the leaders of Poland and Hungary to play a double game with these geopolitical players. What will be the consequences of such a game and how appropriate it is now — again only time will show.