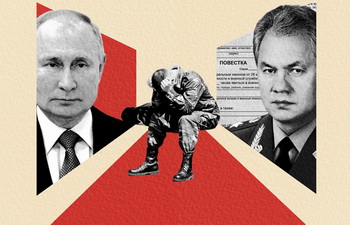 Since the beginning of September 2022, Ukrainian troops continue to conduct a counteroffensive almost on the entire front line. According to its results, almost all of the territory of Kharkiv region has already been liberated, as well as a number of settlements in Donetsk, Luhansk, Zaporizhzhia and Kherson regions. At this, Russia and its “second army in the world” cannot resist the offensive of Ukrainian forces, and its troops are gradually withdrawing from their positions in Ukraine. Moreover, as a result of unsuccessful battles for them, the RF Armed Forces had largely lost their potential, which forced Russian President V. Putin to announce partial mobilization in the country. However, the conscription of reservists, as well as pseudo-referendums in the occupied territories of our state, will hardly help Russia in its war against Ukraine. Given the particular relevance of these issues, we will analyze them in more detail.

According to experts from the American Institute for the Study of War (ISW), the Kremlin cannot create a mobilization reserve of even low quality. The Russian mobilization system is struggling to fulfill the task set by Russian President V. Putin, but most likely it will not be able to do so. First of all, this situation is caused by the inability of the Russian authorities to quickly resolve the fundamental and systemic challenges associated with mobilization of reservists.

The main of these problems is the reluctance of most of the reservists to fight in Ukraine. This issue has become particularly acute due to mass losses among Russian servicemen at the front. According to the General Staff of the Armed Forces of Ukraine, the number of killed soldiers and officers in the enemy army has already exceeded 56 thousand. And the wounded are at least three times as many. And this is true, not an exaggeration. Despite the Kremlin’s ban on disclosing information on losses in Ukraine, Russia’s regional media systematically publish at least a few dozens of obituaries a day. Moreover, only individual cases are reported, but in fact there are much more of them. And no one counts those forcibly drafted into the armed formations of the “L/DPR” and killed in battles.

The Russian authorities’ not fulfilling their obligations regarding the social security of servicemen, the payments of monetary compensation for injuries or deaths at the front does not add to the desire to serve in the army either. The Russian authorities save money and do everything to pay nothing to anyone.

The same thing happens in Russian hospitals, where in all possible ways they try to avoid issuing certificates of injuries that allow the wounded to get compensation or resign from service. In some hospitals, in particular, in Rostov-on-Don and in Rostov region of the Russian Federation, the wounded are refused to be accepted at all and are sent back to the front. And it is already a complete absurdity and mockery to demand Ukrainian medical certificates from those wounded Russian servicemen who were captured and then exchanged.

Of course, reservists are trying in every way to avoid mobilization, including through self-injuries. The most common way is to break arms, which even women already do to their husbands. Other conscripts destroy their military IDs, hide from military registration and enlistment offices, or even try to leave the country. Thus, after the announcement of the conscription, all tickets for the nearest flights from Russia to visa-free countries, including Turkey, Armenia, Belarus and Azerbaijan, were sold out. On the borders with Belarus, Finland, Azerbaijan and Georgia, huge queues of cars have formed.

However, the Russian military commissariats are not going to make concessions and take intransigent positions. For example, due to a broken arm, one can get a postponement from the conscription for a maximum of several months. And if the intentional nature of the damage is proved, the person will be prosecuted. It is also argued that attempts to evade mobilization by destroying military IDs and passports are futile, since they can be quickly restored. Bans are imposed on the departure of men of draft age from the regions of their permanent residence and abroad.

In addition to certain categories of reservists, vehicles, including of private companies, enterprises and persons, are also subject to mobilization. We are talking about trucks and cars, motorcycles, tractors, trailers, road construction and loading equipment, refueling trucks.

At this, mobilization measures in Russia are extremely unorganized. Medical examinations are not actually carried out. Even people with serious diseases and disabilities are drafted, and their certificates from medical institutions are not recognized. Military bases are unprepared to receive the mobilized. There are not enough premises, necessary household property and food. As a result, people are forced to sleep on buses for several days and eat as they can. The mobilized are moved from one military base to another, and cannot be settled normally.

A wave of outrage in the Russian society has already moved from social networks to street protests. Lately, such actions have taken place in Moscow, St. Petersburg, Novosibirsk, Irkutsk, Makhachkala, Ulan-Ude and other cities of the Russian Federation. They are severely dispersed by the police. From September 22 to September 25 alone, more than 800 people were detained. Arson of military commissariats and administrative buildings intensified.

Besides, mobilization undermines the morale of the personnel of the Russian army. Soldiers and sergeants have their contracts terms forcibly extended and are prohibited from leaving. Due to lack of funds, cash payments are delayed.

At this, according to military analysts, despite the plans to call 300 thousand people, mobilization is unlikely to significantly strengthen the RF Armed Forces, at least in the nearest future. Among the reasons for this are the reluctance of the majority of reservists to fight in Ukraine, the need for time to restore their skills and create new military units, as well as the lack of weapons.

The aggravation of the situation is recognized even in the Kremlin. The Press Secretary of the Russian President D. Peskov is “surprised by the inadequate reaction of citizens to the mobilization of reservists. Especially as all the necessary information about it is provided by the Ministry of Defense and in the media”. According to some experts, these circumstances indicate that Russian propaganda is no longer working, and Putin’s regime is weakening every day and is approaching its collapse.